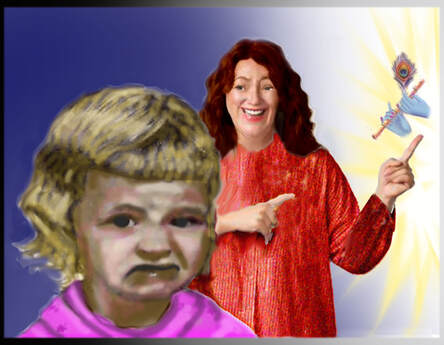 You say Jeev is anadi (beginning-less) and anant (endless). And God is also anadi and anant. So that means there is not shortage of time. When there is no dearth of time then why do you always tell us to hurry up and attain God?

Yes, it is true, God has no beginning and no end. Soul is an eternal part of God. So, just like God the Jeev has no beginning and no end. So yes, the soul does not have a dearth of time.
​In addition, there is Daivik taap which are caused by nature e.g. storms, floods, drought.
​And then there are Bhautik taap which are caused by other beings like insects. ​
​
Did you answer “YES” to the above 2 questions? If your answer is “NO” then do you want to know of a way to get rid of these pains? If so, please read the rest of this article.
There are three kinds of sources to prove anything according to our scriptures i.e. Perceptual evidence  (प्रत्यक्ष प्रमाण), Inferential evidence (अनुमान प्रमाण) and Scriptural evidence(शब्द प्रमाण). The 1st 2 forms of evidence are weak, for they are prone to yield incorrect conclusions. Whereas Scriptural evidence is acknowledged as the best and most authentic evidence for this. This is the kind of evidence that is produced by those who have experienced bliss. So I'll use only this form of evidence to answer your question.

The Vedas assert, there are three entities in existence, Jeevatma, Parmatma and Maya and all of them are eternal and endless. Hence, it is also true that Jeev and God are sentient.
Yet the human beings are always encouraged to attain aim of life in the present life and that too as soon as possible –
“O souls, passionately pursue the supreme truth now. Otherwise, a colossal loss will befall on you. What a calamity would that be?”.
​Answer -
“If in the present human form you don’t accomplish your aim in life then you will be sent to the lower species of life for billions of lives before God again gives you a human form”
​The aforementioned two hymns of the Vedas give some significant information;
1. There is an unavoidable aim of life, which is indispensable to attain.
2. That can be attained only in human form.
3. The life is very short and
4. Time of death (of human form) is unknown to all

Although the soul is eternal. And Lord Krishna says in Gita –
“The jeev is neither born, nor it ever dies; nor having always existed, does it ever cease to exist. The soul is without birth, eternal, immortal, and ageless. It exists even when the body is destroyed.”
This shloka from Gita explicates that the body is transient and the time of death is unpredictable. Yet, using this body we have to attain the only aim of life. 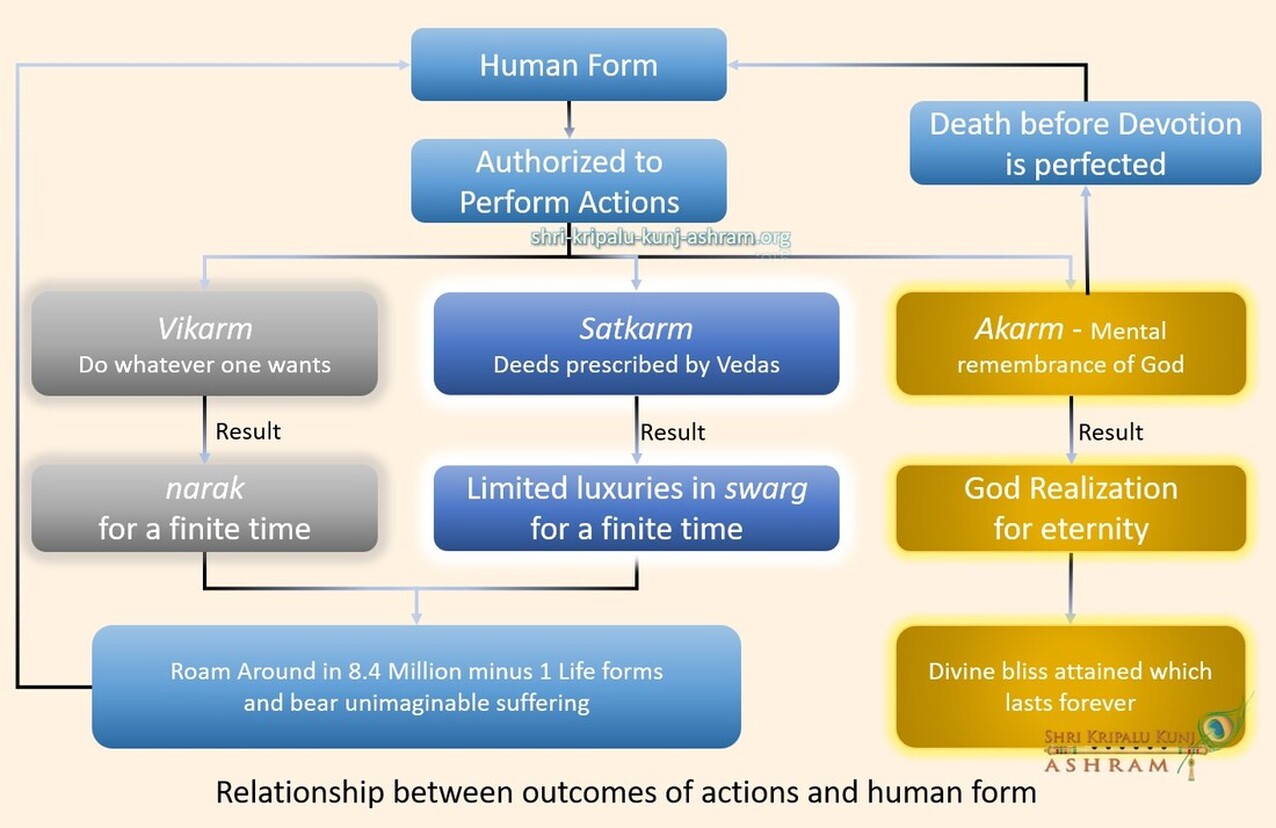 This body has been given for one and only one reason; attaining unlimited divine bliss. Therefore, it is wise to attain God in this very life . And please note: This right HAS NOT been granted to any other form of life including the forms of celestial demi gods and goddesses. Attaining human form is the rarest of the rare opportunities. If this human form is spent in enjoying sensual pleasure and therefore are reluctant in pursuing it, then it will be considered as an abuse of the given tool (1). Not only will death snatch this tool, God will also not give us a human form for millions of births over a period of billions of years.

You might have seen that in our world as well, a company revokes the given authority for an employee who misuses it. This world works on physical evidence and testimonies. But God does not rely on those. He knows everyone's thoughts.

Saint Tulsidas Ji says-
“Only once in a while God graces a jeev with a human life”.

Some naïve people say, “I understand the philosophy (2) very well. Yet I will start devotion after all my responsibilities are behind me”. This kind of thinking is found in those who don’t realize the uncertainty of life.

​The Mahabharat says,
“How can you be certain that after exhaling you will inhale again?”

It is clear that the greatest achievement of the human form is attainment of everlasting Divine bliss  or freedom from the bondage of Maya (liberation).
Most of the schools of philosophy assert, freedom from Maya or emancipation (Mukti) is the ultimate aim of life. Jagadguruttam Shri Kripalu Ji Maharaj explains it is not wise to aim for liberation from Maya. Mukti releases from miseries indeed but mukti does not grant bliss. An aspirant of liberation does not believe in any form of God so they worship formless God. That’s why, when they get freedom from Maya, they also get absolved from the material body which comprises of senses, mind  and intellect forever. The pure soul merges into Supreme Soul-God. God is veritable bliss. The liberated soul permanently dwells in the ocean of bliss but cannot enjoy the ever-increasing bliss of Sakar Brahm since he becomes bliss himself. Duality between the enjoyer and object of enjoyment is a must to enjoy (3). A liberated soul loses that opportunity forever (4).
Hence, one must resolve firmly to attain our goal in this life, since we don’t know where and what form of life will be given to us in future. Present is in our hands. We must make every possible effort to build a promising future (7) before leaving this body.