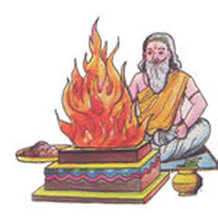 For example, if one performs Karma, exactly as depicted in the Vedas with no errors, the Karma will result in confirming a place for that individual in the heavenly abodes. The individual will enjoy heavenly bliss for a predetermined period of time. After experiencing those luxuries, one will be sent back into a lower forms of life on the earth. ​Thereby one will have to go through innumerable cycles of births and deaths before being granted a human form again. When granted the human form, the individual will gain back the right to perform Karma.

So, Karma is a tool or a vehicle to attain heavenly gratification for a limited duration.

1. Swaroopavarika Maya (स्वरूपावरिका माया) or Avidya Maya (अविद्या माया): This aspect hides the true identity of self and creates the wrongful belief that “I am this body”.

2. Gunavarika Maya (गुणावरिका माया) or Vidya Maya (विद्या माया): When gyani attains knowledge of self  atma-Gyan then he conquers Rajas and Tamas modes of Maya. Yet Sattva (सत्तव) (Goodness) mode remains dominant. Upon perfecting the sadhana of Gyan marg, the aspirant is freed from   Swaroopavarika   Maya. In other words, the soul attains the knowledge and bliss of self (आत्मज्ञान) (2). This state is called   brahmabhootavastha (ब्रह्मभूतावस्था). In this state one perceives everyone as a soul. Thus, one doesn't rejoice in material gain or become upset due due to material losses. Even after attaining such a high state Sattva (सत्तव) ​guna stays dominant. Therefore, one is still under the clutches of Gunavarika Maya hence one does not experience God (परमात्मज्ञान). Even from such a high state one can fall like Jad Bharat did.

Now let us examine the path of Bhakti called  Bhakti Marg.
भक्त्या संजायते भक्त्या
Bhaktyā san̄jāyatē bhaktyā
The result of Bhakti is no different than Bhakti itself. Aspirant needs to practice Bhakti or do Sadhana Bhakti. Practice imparts perfection and that is called Siddha Bhakti, which results in God realization. In other words Bhakti is the only means of God realization. Bhakti is ever increasing and everlasting. Even Sage Narad, Lord Shankar, and Shri Krishna also do Bhakti.
फलरूपत्वात्।    ना. भ. सू.
Phalarūpatvāt. Narad Bhakti Soottra.
All other paths are spent after offering their respective rewards long before God realization. But Bhakti never ceases to exist. Moreover it increases even after God-realization.

Bhakti is everlasting (सदातनत्व) (3). This is an exceptional quality and this quality is there ONLY in Bhakti.
If you enjoyed this one, you might also like