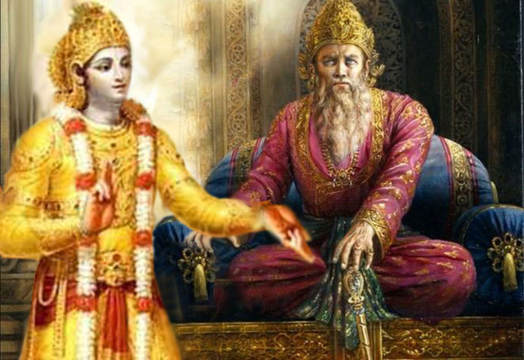 Shri Krishna explaining principles of karma to Dhritrashtra
King Dhritarashtra (धृतराष्ट्र) was the son of Ambika, the first wife of King Vichittra Virya. His father was the great Saint Ved Vyas.  Dhritarashtra was blind by birth. King Vichittra Virya had another son Pandu who could see. Pandu was highly competent and knowledgeable, but due to some strange turn of events, Dhritarashtra became the King of Hastinapur. Dhritarashtra and his wife Gandhari were proud parents of 100 sons. They were known as the Kaurvas as they were the descendants of King Kuru.

All of the hundred Kaurav brothers were strong valiant warriors and well-skilled in the art of war. Yet, in the battle of Mahabharata all of them were killed by the Pandu's five sons known as the Pandavas. After the loss of all his hundred sons, Dhritarashtra, overcome with immense sorrow, asked Shri Krishna,"I know you are God. You could have stopped the war, in which all my hundred young and strong sons were killed. While I, their blind old father, am sitting here mourning their death. Why did this fate befall me? I never committed such a grave sin which resulted in such a horrible punishment!”

Shri Krishna counter questioned Dhritarashtra,"Do you remember all the karma you performed in your previous human lives?” Dhritarashtra was a very pious person and was a great scholar possessing in-depth knowledge of the scriptures. He said, “I remember four of my past lives and every action that I performed in those lives. I led a very virtuous life and committed no sins.”

Shri Krishna told him, “You have been given the human form countless times before this one. In each of those lives you performed innumerable good and bad actions. You just remember four out of the uncountable past lives! Then how can you say that you do not deserve this?”

In the human form, we perform actions every moment and each action yields a consequence. In each of those uncountable past human lives, if one commits only one sin, even then the past sins become uncountable. But the merciful God does not make us undergo the fruits of each action right away. Only very few actions result in instant fruition e.g. eat food and feel satiated. The rest of the actions are stored in our subtle mind, which are called accumulated (sanchit) karma. Again, out of these sanchit karma (संचित कर्म), God predetermines only five things for every soul to undergo in the next human life. 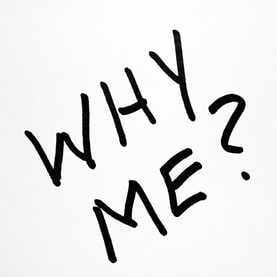 These five events are also known as fate, destiny or prarabdh (प्रारब्ध कर्म). We have to undergo the consequences of the remaining stored actions over the course of several future lives.

Human beings are permitted to perform fruit-yielding actions or kriyamaan karm (क्रियमाण कर्म). Kriyaman karm can be done to
Souls neither remember the good or bad karma performed in their previous lives nor do they recall their material or spiritual status in those lives. Yet, Almighty and omniscient God, due to His inherent nature of mercy, keeps an accurate and complete account of all our actions and mental dispositions. In our subsequent lives, God rewards us for our good deeds. Without even knowing the reason we get those gifts and enjoy them without any gratitude towards God. But are very prompt to blame God, when we attain the result of our bad deeds. 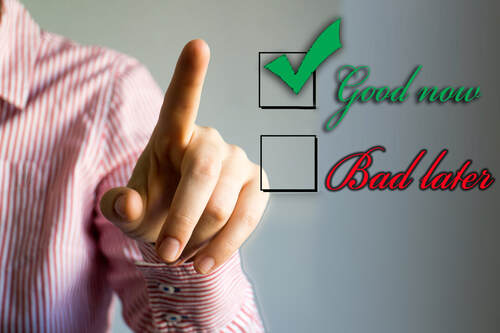 Choose to do good now!
The saints explain the consequences of sinful karma to forewarn and dissuade us from doing wrong things. But, being ignorant we callously ignore those warnings by saying, “we will cross that bridge when we get there” Well, later one would have to endure the consequences. Now is the time to choose which action is perform.

The saints also advise that bhakti alone can


Bhakti means always acknowledging our permanent relationship with God and being engaged in mental remembrance of only Him.

Only real bhakti to God purifies the heart and thus creates a natural disinclination towards committing sins. The reason being, the devotee remains absorbed in the ecstasy of remembering God and has no time to spare to get involved in insignificant matters of the material world. His total submission to God makes him realize God and enjoy His divine bliss forever. 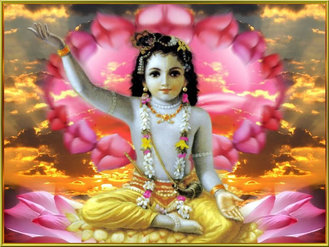 Thus, apparently, we are the builders of our destiny. Our destiny is not something which is imposed upon us from somewhere by someone. Our actions in the present time build our destiny in the future. So we are the builders of our own destiny.
अच्छा काम जल्दी करो, पाप करने में उधार कर दो ॥
Be prompt is doing good deeds, postpone worldly matters like anger, greed and jealousy.
- Jagadguruttam Shri Kripalu Ji Maharaj