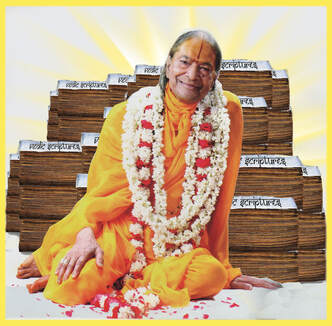 We are unable to fully understand the meaning of scriptures written in Hindi such as the Ramcharitmanas and listening to Shri Maharaj Ji’s lectures, we hear Him cite evidence from Sanskrit scriptures such as the Vedas, Puran, Gita and Bhagavat and at times from books we have never before heard of. This sort of overwhelms us. What would be the purpose of citing from all of these scriptures?

In modern times, people rely heavily on their own experiences and logical explanations to understand situations. When curious to know more about something, they turn to the internet and social media to learn from the experiences of those who have been in similar situations before.
​
​Shri Maharaj Ji uses the same three forms of evidence in His lectures. In scriptural language, these three ways of proving any theory are referred to with the following names:


Prolific speakers impart their vision by making it compelling and relevant to the audience. To do so they use some or all of the aforementioned evidence to crystalize the idea in the minds of the listeners, thereby, their vision serves as the guiding light for the audience. Whenever the listener is in a dilemma, they can reorient themselves by using that vision and continue to move forward on the path of spirituality.

​He was not only a prolific speaker, rather He descended on this Earth to revolutionize spirituality. Shri Maharaj Ji knew very well how different people absorb information differently. He used all three forms of evidence to explain scriptural concepts and solidify our understanding of spiritual truths. So let us examine each of these methods of proving any theory and then understand how Shri Maharaj Ji uses them to make the messages relevant to us.

​Science of proving a point or theory

Perceptual evidence (प्रत्यक्ष प्रमाण) – Perceiving something by one's own senses is referred to as perceptual(प्रत्यक्ष) evidence. However, there are things that cannot be perceived by our senses. I am going to make a controversial statement here. Perceptual evidence is the weakest form of evidence yet individuals perceive it as the strongest form of evidence. Don’t take offense, instead ponder on the following before forming your own opinion.
​
1.    Many things cannot be perceived by our senses such as feelings. How can we prove love, hatred or any other sentiment?

2.   Senses are not perfect. Our eyes see the sky is blue, whereas the sky has no color. An empty space is called sky.

Spectrum of light
3.   Senses can work only with the association of the mind and the mind has its faults. Sometimes, it perceives things according to its own preconceived notion about the thing or person. Psychiatrists term it as a "confirmation bias". Along with the mind, the senses are also limited in their capabilities e.g. eyes cannot perceive ultraviolet or infrared spectrum of light. Similarly, ears can perceive a limited range of frequencies and that too only when the source of the sound is within audible range.

Swami Ramakrishna Paramhansa
4.     If the mind is preoccupied then senses cannot grasp any data even if it is laid out in front of them. In your own home you might have observed that when children are busy playing they can’t hear their mom calling them for a meal. A couple of centuries ago an artist was busy painting a picture in his shop in Jagannath Puri. Right outside his shop the huge annual procession called Jagannath rath-yatra passed by. The procession had thousands of people playing various musical instruments. Yet his ears did not perceive the tumult. Swami Ram Krishna Paramhansa wanted to participate in the Rath yatra but reached there a little late. Swami Ramakrishna Paramhansa, asked the artist, “Have you seen a Rath-Yatra go by or is it still awaited?” The artist said, “so far the rath-yatra has not crossed this place”. Others around him admonished him for lying to a great saint, but the artist was insistent that he did not see any procession pass by. Swami Ram Krishna Paramhans then went into a meditative state and realized that the artist was indeed speaking the truth - he was so engrossed with his art that he had failed to notice the rath yatra pass through the town.​
​
So, perceptual evidence does not offer perfect evidence in all situations, yet it speaks to us the loudest. Therefore, Shri Maharaj Ji cites examples from our everyday life to make the spiritual messages relevant to us.

Inferential Evidence (अनुमान प्रमाण) - The second form of evidence is called "inferential" evidence. One can infer things using logic. When one knows the relationship between the things then seeing one thing they can draw an inference; even though the second situation cannot be directly perceived. For example, most of us have seen smoke blow from a bonfire. Scriptural Evidence (शब्द प्रमाण) – Sensory perception and inferential logic are incapable of conclusively proving everything. Governments use “other people's words” as evidence. A president asks his advisors to research different things and consults them to make a decision on what to do next. The whole public media is based on someone going somewhere and then telling about what they see to others so others can know about those things.

Scriptures provide irrefutable evidence of spiritual truths. These scriptures are produced by those trikaaldarshi God realized sages and seers who could see the past, present and future. They are a documented treasure of their findings based on personal experience and solid and irrefutable research.

Shri Maharaj Ji quotes from the scriptures to create a vision which leads us to the highest goal. Different people strive for different things therefore there are many goals written in the scriptures. While Shri Maharaj Ji establishes the highest goal, He proves His teachings by quoting from relevant scriptures. And, throughout His lectures He cites from many different scriptures to instill the concepts relevant to an aspirant's progress. He does it purposefully for very good reasons.
Why does Shri Maharaj Ji quote from a multitude of scriptures?
Shri Maharaj Ji was not an ordinary scholar, He was Jagadguruttam. Prior to the advent of Kaliyug, people had significantly more faith in God. He knew very well that most people in Kaliyug have little knowledge and no faith in the eternal holy scriptures. Masses do not even know the names of the scriptures let alone knowing what is written in them. In fact, not just the masses but many scholars also had not heard the names of many of the scriptures from which Shri Maharaj Ji cited verses. Still, He provided references from many scriptures. He did not cite those verses to show-off His intellectual prowess, instead He did it for the benefit of the masses (2). How so? Read further Jagadguru Kripaluji Maharaj
Thousands of listeners intently listen to Shri Maharaj Ji’s lectures everyday and many of them have become ardent followers.

​Think - when you go to a supermarket, neither do you buy everything nor do you avoid purchasing things that look interesting even though you did not come for those. You just look for things that suit your needs. Needs of different shoppers are fulfilled by different things and that is why the store carries a variety of things.

Likewise, while listening to the lecture if you don’t like quotations, you can choose to ignore listening to them. There might be a different segment of listeners who care for that aspect of the lecture. Intently listen to the rest of the matter that pertains to you. His words are immensely precious for human life; they are also practical and logical.  Hearing them, contemplating on them and putting them into practice will increase your knowledge and lead you towards the ultimate aim of life .
Kripalu Leelamritam - He honors His devotees' wishes above all  >>
If you enjoyed this one, you might also like