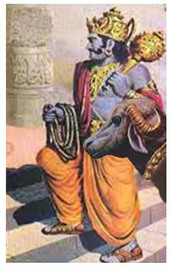 Kaal or Yamraj
According to our invaluable ancient scriptures, mainly Mahabharata, Manu Smriti and Shrimad Bhagvatam etc. the concept of eternal and cyclical time is a very important aspect of philosophy.

Kaal (काल​) has a few meanings in Sanskrit language. The first 2 meanings are commonly used. The third one is also defined in the Vedas and is a measure of eternal time. 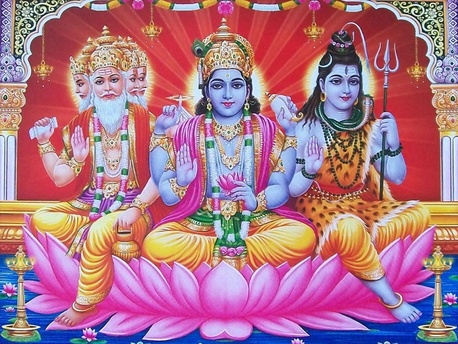 The cosmic-egg (Brahmand) has three aspects:
These three aspects of creation are governed by the Trinity –
Brahma, Vishnu and Shiva.
​
Then the entire universe merges into the infinite belly (karnarnav) of Brahma - Supreme God for a certain length of time. This state is called pralaya. During this time there is no activity in the brahmand. After this again Brahma - Supreme God chooses another Brahma. Then the new creator Brahma creates the entire universe with the inspiration of Brahma - Supreme God.  On a much smaller scale this same cycle can be seen in our lives as well. We wake up after a long slumber, then all day long we are engaged in various activities. Again night falls and we sleep. At this time all our activities cease.

The concept of time in human years comes to us from Manu Smriti and Mahabharat revealed by Saint Ganita. In our daily lives time is measured as
The speed of time in celestial planets is exceedingly higher than that of the earth planet. For example, as written in Srimad Bhagavata (3.11.19) one celestial day is equivalent to the 360 years of earth or 1 human year is equal to one day and night of celestial beings (swarg ke devata).

Vishnu Puran depicts that the creation span is divided into Kalpas (कल्प​), which is one daytime of Creator Lord Brahma. His day is called Uttarayan (उत्तरायण). Lord Brahma’s nighttime is equally long and is called Dakchhinayan (दक्षिणायण). One day along with one night of Creator Brahma is 8.58 trillion human years long. Brahma lives for 100 Brahma years called brahm varsh (ब्रह्म वर्ष​) and is 309,173,760,000,000 human years long, where each year has 360 such days plus 360 nights. At the end of 100 years of Brahma the cosmic-egg is destroyed.

The entire time of a creation is divided into many cycles.  Below is the description of all of these.

According to our Puranas the first and foremost age is Satya Yuga (सत्य ​युग) or Krita Yuga (कृतयुग) or frequently known as Sat yuga (सतयुग​).  The meaning of Sat in Sanskrit is Truth.

So this age is the “Age of Truth”. When the Sattvik mode of Maya is predominant, every manifestation (anything which is done and comes forth in any way) and actions of every being are close to the purest sentiments led by divine virtues like love, sympathy, kindness,  truthfulness, honesty etc. It is also referred to as the ‘Golden Age.’ Knowledge, meditation and penance are the most significant factors of this age. Every promise was honored even if it meant sacrificing one’s own life. King Harish Chandra was an example of this virtue who gave his entire kingdom to a hermit as king Harish Chandra promised him to offer anything according to his wish.

Our scriptures compare this age as a bull with 4 legs of austerity (तप), purity (शौच), mercy (दया) and truth (सत्य​).

As mentioned earlier the duration of Satyug is 1,728,000 human years. Austerity for thousands years is the only means to realize God for the people of this age.  They would deprive their bodies of food and water etc. and stay alone in a solitary forest withstanding the torture of rain, hail, wind, cold and fire etc. during their austerity to accomplish their goal of life.

The average life expectancy of an individual was approximately 100,000 human years. In Sat yuga, humans did not age, they didn't suffer any physical ailments or mental diseases like anger, passion, greed etc. The first four descents of Supreme God occurred in this era, namely, Lord Matsya, Lord Koorma, Lord Varah and Lord Narsingh. 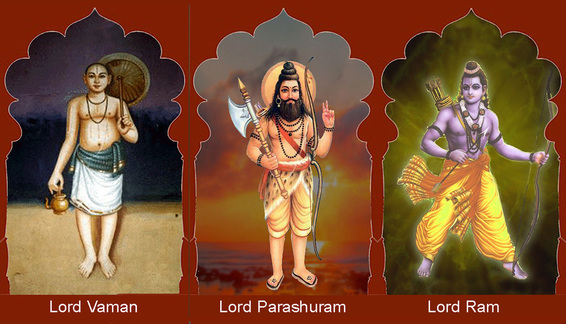 God's descension in Treta Yuga
Treta yuga (त्रेता युग​) is the second era out of four eras. The total duration of Treta Yug is 1,296.000. This age is known as the silver age as in this era knowledge and spirituality is reduced to three-fourth. Although the Satvik mode of Maya is still high, there is a little mixture of Rajas mode of Maya. In other words Dharma stands on four legs in Satyug while in Treta Yug, it stands only on three legs of religion (i.e. purity, mercy and truth). Austerity, a pillar of religion collapses in this yuga.

People of this yuga are truthful and perform all the religious ceremonies according to the instructions of the Vedas. In this yuga the entire human race is divided into four groups called Varna :
All people of this age would sincerely adhere to their respective duties considering it as a part of religion. People would beget desired fruits by performing actions, donations mentioned in the Vedas and by making resolutions.

The average life expectancy of a human in the Treta Yuga was approximately 10,000 years. All the Kshatriyas born in this yuga were valiant, zealous, highly intelligent, pious, truthful, beautiful, suitable to be blessed, revered and the protectors of all people.

The chief method of emancipation in this era is Yagya (the ritualistic fire sacrifices). The average human age used to be 10,000 years and height reduces to around 30 – 50 feet. Knowledge was predominant in this age.

This age is famous for the fifth, sixth and seventh avatars(descents) of Brahma - Supreme God i.e. Lord Vaman, Lord Parashuram and Lord Ram.

This is the contemporary era in which we are living. The total time of Kali yuga is 432,000 human years. Kali yuga started on February 17 in 3102 BC. The best teams of the scholars of astrology, from all over India, give the same figures of 3102 BC and publish it in the panchang (journal) every year.

This is the age of deterioration of spirituality and ethics and is referred to as the dark age or iron age. In Kali yuga only truth is left, the other 3 legs of religion are shattered. Truth is also deteriorating due to rampant irreligion manifested as passion, wrath, ego and intoxication etc.

Sage Markandeya reveals some prominent features of Kali yuga in the Mahabharata. Viz; 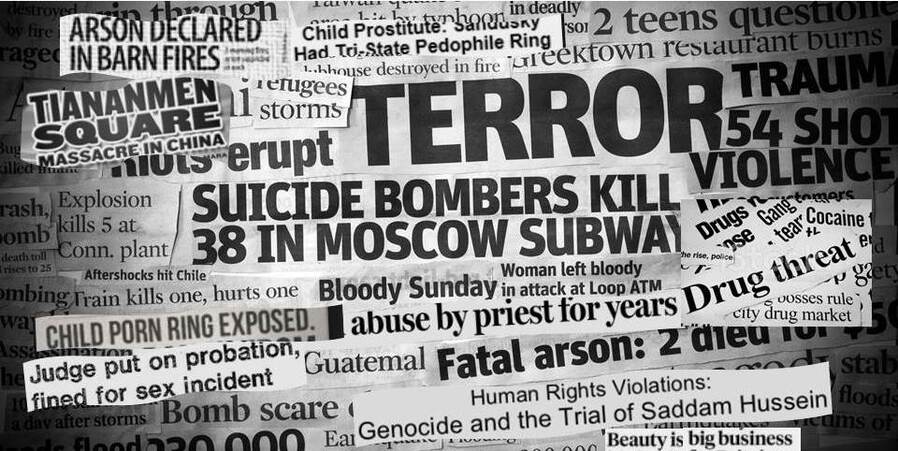 Newpaper clippings illustrating evils forecasted to be prevalent in Kali yuga
A little over 5000 years ago, in the 12th canto of the Srimad Bhagavata Mahapurana, sage Veda Vyas wrote 15 predictions and prophecies about the dark times for the present Kali Yuga. Some of them are mentioned below. Despite the negative tone of these prophecies, we don't need to get disheartened. There is one bright spot for all of us, which is mentioned at the end.

Religion, truthfulness, cleanliness, tolerance, kindness, duration of life, physical strength and memory will all diminish day by day because of the powerful influence of the age of Kali.

In Kali Yuga, wealth alone will be considered the sign of a man’s good birth, proper behavior and fine qualities. And law and justice will be applied only on the basis of one’s power.

"Men and women will live together merely because of superficial attraction". Success in business will depend on deceit. Womanliness and manliness will be judged according to one’s expertise in sex. A man will be known as a Brahmin not because they are performing the duties of Brahmin written in the Vedas but because of wearing The Sacred Thread (Janeu).

"A person’s spiritual stature (e.g. saint, aspirant, accomplished devotee, scholar etc) will be ascertained merely according to external symbols" like kanthi(a special necklace), tilak (a mark on the forehead), saintly attire etc. Based on these external symbols people will change from one spiritual order to the other. A person’s propriety will be seriously questioned if he does not earn a good living. And one who is very clever at juggling words will be considered a learned scholar.

"A person will be called un-blessed if he does not have money, and hypocrisy will be accepted as virtue". Marriage will be arranged simply by verbal agreement; the bond of marriage would not need to be backed up by moral values and a proper Vedic ceremony. External cleanliness (for example a bath) will be considered sufficient. No attention will be paid to Godly-character, knowledge, purity of thought or way of living.

Lord Krishna foretold in Brahm Veivart Puran, “Kali Yuga will be full of extreme hardships for people with ideals and values”.

Apart from this, Lord Krishna also declared in Shrimad Bhagvata Mahapurana, “Ganga! At the end of Kali yuga, when

then Brahma - Supreme God will descend as Kalaki to rectify the situation and bring back chastity in the world. That period of 10,000 years will be the golden time in Kali yuga. By the time the Kali yuga ends, the world is already like Sat yuga".

Radha Govind Geet - Couplets illustrating path to emancipation in Kali yuga
Although, life in Kali yuga is tainted by a multitude of vices, yet Kali yuga is endowed with one great quality, which hides all those faults and makes it desirable. That quality being “only by chanting the divine names of Shri Krishna along with loving mental remembrance, one can cross the ocean of the material world and from that moment on attain the divine abode for eternity”. 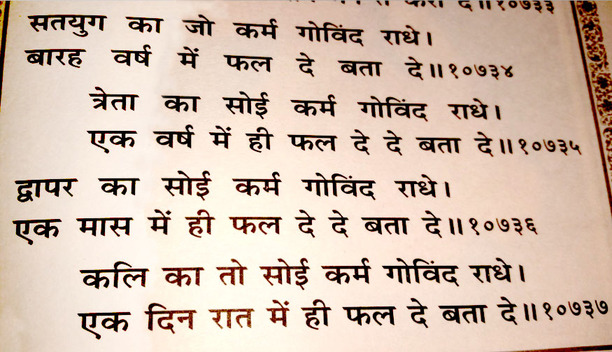 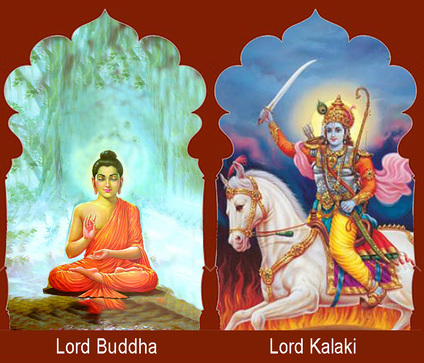 God's descension in Kali yuga
Jagadguru Shri Kripalu Ji Maharaj has shed light on another great quality of Kali yuga, which is extremely beneficial to all spiritual aspirants. Due to this quality even great paramhans desire to descend on earth at this time.

The benefit of performing devotion for the mentioned time in the respective yugas is equal
In other words God-realization in this yuga has been made the easiest.

This age is famous for the ninth and tenth avatars(descents) of Brahma - Supreme God i.e. Lord Buddha and Lord Kalaki. Lord Kalaki will herald the Golden age.

71 cycles of Chatur yuga make a Manvantar (मनवन्तर​). Manu (मनु) means first ancestor of human beings and antar means span of time. Descendants of Manu are called manushya (मनुष्य​) or humans. Manu is created by Brahma. In one day of the creator Brahma there are 14 Manus. Each Manu rules for one Manvantar which lasts for 306,720,000 human years. When one Manu dies Brahma chooses the next one. Thus altogether there are 14 Manvantaras governed by 14 different Manus. The end of the 7th Manvantar marks the mid-day of Brahma’s day.

The 6  previous Manus were:
​
The seventh Manu, who is governing at present, Vaivasat and is the son of Vivaswan. So the name of present Manvantar is Vaivaswat Manvantar. According to Shrimad Bhagawat (4.30.49) Vaivaswat Manu has lived 27 Maha yugas (116,640,000 years) already and is in the Kali yuga of 28th Manvantar.

After the end of the last kalpa in 100 years of Creator Brahma’s life, the final dissolution of the universe will happen. Brahma - Supreme God will rest for 100 Brahma years. After that Brahma - Supreme God reveals the world as it is. Thus the same cycle of creation starts.

Current age of the creation

As of 2015 AD of the Roman calendar, we are in the first day after the 50th birthday of Creator Lord Brahma. In that first day we are in the 28th Kali yuga of the 7th Manvantar. 5,116 years of Kali yuga have already elapsed and 426,884 years still remain. Putting it all together this brahmand is a little over 154 trillion human years old and will last for another 154 trillion human years.