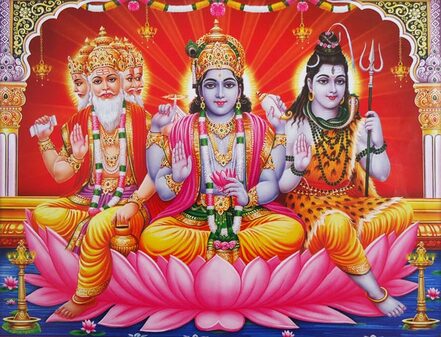 The three governors of each brahmand: Brahma (creator), Vishnu (sustainer) and Shankar (destroyer))
Of these three governors, Lord Brahma is the creator, Lord Vishnu is the sustainer and Lord Shankar is the destroyer. This Brahmand, where we live, is the smallest of all universes and is created by Chaturmukhi Brahma which means Lord Brahma with four faces. The size of this Brahmand is 4 billion miles.

There are Brahmas with 12 faces, 500 faces, 5000 faces and some Brahma’s have millions of faces. The size of a Brahmand is directly proportional to the number of faces of Brahma.

The Supreme Governor of all these uncountable cosmic universes  and their governors is the Supreme Lord Shri Krishna. 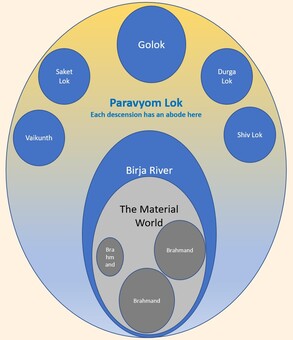 Shri Krishna is not governed by anyone. He is the Brahm - Supreme God – Superior-most (Paratpar) amongst all The Supremes.

As once Narad Ji said to Him, in a lovingly teasing manner
"You are supremely independent. That is why you do whatever you wish”.

The Vedas say:
“Shri Krishna is the Brahma - Supreme  God”.
“Let alone be greater, none is even equal to Him”

But Shri Krishna says all the theories that I am self-willed, supremely independent and greatest are false. Why? Because even though the innumerable universes and their governors remain under my control yet I am a bonded slave of my fully surrendered devotees. 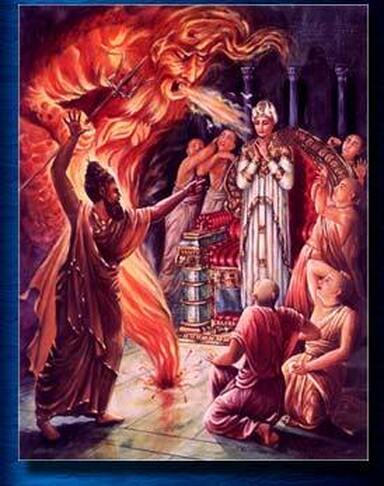 Shri Krishna saves King Ambarish from the demoness Kritya which was produced by Durvasa
“O Brahmin! Although I am completely independent yet I am under the control of My devotees". Just like one of my powers Maya makes the entire world dance to its tune, my devotees make Me dance to their tune.

Rishi Durvasa didn’t pay heed and went to show off his might to king Ambarish. King Ambarish and his queen were performing great austerities. For twelve months they had been fasting on every ekadashi. Their austerities was about to end. On the morning of the last day of austerities, Rishi Durvasa and one hundred of his disciples arrived at King Ambarish's palace. Ambarish was overjoyed and welcomed the saints. Also, he requested the saints to accept a banquet. Rishi Durvasa agreed but wanted to perform mid-day ablution before accepting the meal.

Rishi Durvasa and his disciples hadn't returned  and the opportune time (mahurt) for ending the fast was about to end. The king's priests advised him to eat a leaf of Tulsi plant to break the fast and Ambarish followed it.

Rishi Durvasa, with his mystic powers, knew that Ambarish had broken his fast without offering the food to the saints. 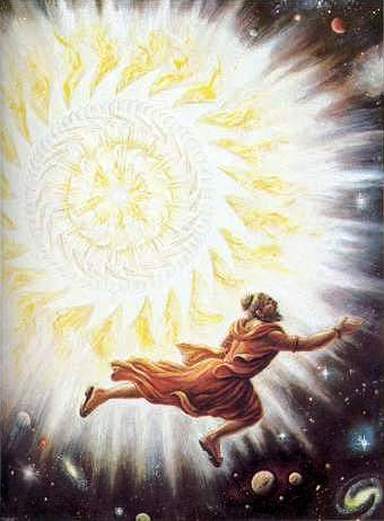 Durvasa Runs for his life and Sudarshan Chakra follows him
Enraged he reached Ambarish's palace. Ambarish folded his hands and sought apology but Rishi Durvasa would not relent. Rishi Durvasa decided to punish Ambarish for his impertinent behaviour. He plucked out a hair, turned it into a demoness Kritya and commanded her to eat Amabarish. Amabarish didn't resist instead he stood politely with his folded hands.

Saints consider themselves a soul and realize the impermanence of the body. So they remain unfettered by anything that might happen to the body. But, Shri Krishna, seeing his devotee in trouble could not bear it and set His Sudarshan Chakra after Rishi Durvasa.

First, Chakra burnt the demoness to ashes, then moved towards Rishi Durvasa to burn him as well. Seeing Sudarshan moving towards himself, Durvasa was frightened and ran for his dear life. Rishi Durvasa went to all the planets in an attempt to save Himself, but he could not get rid of the Sudarshan Chakra.

He tried to seek refuge from Lord Brahma, Lord Shankar and other sovereign personalities, but none could grant refuge against Lord Shri Krishna's Chakra.

Finally, he was advised to seek protection from Amabarish. Upon request from Amabarish, Sudarshan Chakra forgave Durvasa and retreated. Saints have a very tender heart. If anyone honestly apologizes they are quick to over look the offense and forgive.
Shri Krishna says - ​
Imagine a couple is proceeding towards each with outstretched arms with great lust. As they are about to embrace throw a plastic snake in between them. Then observe how they run in the opposite directions screaming in fear. It proves we care for our body a lot more but there is nothing dear like soul.

Shri Krishna loves His devotees even more than He loves Himself. It is for this reason that He takes utmost care of his devotees. That is why He is referred to as Bhakta Vatsal. He asserts in Gita with challenge, 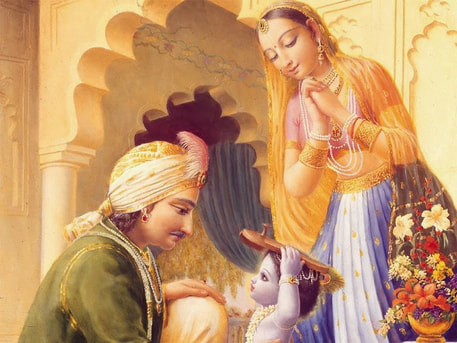 Shri Krishna places Nand Baba's footwear on his head
“My devotee cannot falter because I assume full responsibility of My devotee”.

At the time of God-realization, Lord Shri Krishna pardons all past sins of His devotee and assumes full responsibility of the devotee's actions in the future, and as if that was not enough, He goes on to render His personal services to them. He becomes their slave.

You must have heard numerous stories of Shri Krishna serving His devotees by picking up cow dung for the gopis, picking up and bringing footwear of Nand Baba on His head, upon loosing a bet becoming a horse for his friends to ride on and letting them kick him in His stomach to run faster.

Who can fathom this infinite ocean of love that Lord Krishna has for His devotees!