<- Religious Festivals (When, What, Why)
India is famous for the religious characteristic of its festivals. Readers may be inquisitive to know the spiritual significance of Holi? The most prevalent notion, in this regard is that Holi is a festival of playing with water colors and gulal, having loud fun, eating lots of sweets and rich and fried food!! However, relatively fewer people know that this festival relates to Bhakta Prahlad whose life is an outstanding example of the power of devotion, which can effortlessly nullify the mightiest of demonic powers.

Thus, the true meaning of Holi, is to understand the philosophy propagated by Bhakt Prahalāda (प्रहलाद) and put it into practice to conquer all evils and attain the unfathomable divine grace.

Who was Prahalāda?
Prahlad was the youngest and most virtuous son of demon king Hiranyakashyapu. Only one virtue of Prahlad i.e. his natural love towards the lotus feet of Lord Shri Krishna from the time of his birth is sufficient to describe his glory.
वासुदेवे भगवति यस्य नैसर्गिकी रतिः        भागवत
Vāsudēvē bhagavati yasya naisargikī ratiḥ bhāgavata
Since his childhood years, Prahlad had no interest in playing. Instead he used to be lost in deep remembrance of the Lord. Lord Shri Krishna's grace and kindness had so captivated his heart, that he was not conscious of the outside world. He would feel that God Himself had taken him in His lap and was embracing him. Being lost in such intimate feelings about God, Prahlad used to go about performing the worldly chores such as eating, drinking, sleeping, sitting, walking etc., without even realizing that he was doing so. Sometimes he would start crying loudly, thinking that God had left him and gone. Sometimes, experiencing in his mind that the Lord is right in front his eyes he would start laughing in ecstasy. Sometimes experiencing sweet happiness by remembering Him, Prahlad would start singing loudly. Sometimes ignoring the world around him, he would start dancing in gay abandon. Sometimes Prahlad would get so lost in thoughts of Shri Krishna's pastimes that he would forget himself and start imitating Him. Sometimes experiencing the soft divine touch of the Lord, he would become ecstatic and sit down quietly. At those times, each and every pore of his body would rejoice. His partly open eyes would be full of steadfast love and tears of happiness.

The demons had appointed Lord Shukracharya to be their priest. Shukracharya had two sons - Shand and Amark. Both his sons, lived next to the Kings palace and taught the virtuous and competent Prahlad and other Asura kids about diplomacy, economics etc. Prahlad would listen to his Guru's teachings and repeat the same back to them. However in his heart he did not find it good. One day, Prahlad's father asked his son Prahlad -"Son! What do you like?". On hearing Prahlad's answer, Hrinyakashyapu felt a pain much deeper than the pain he had felt on hearing about the slaying of his younger brother Hiranyaksh.

Prahlad smilingly said:
"Father! I like going to the forest and performing uninterrupted devotion to Shri Krishna, the best".

Hiranyakashyapu was blinded with anger. He called for Shand and Amark - Shukracharya's sons. And said "Take Prahlad away! Let him not be in front of my eyes. Make him understand, teach him to read and write. Teach him about the 4 diplomatic principles of sām(साम)-reasoning, dām(दाम)-monetary allurement, danada(दण्ड)-punishment, bhēda(भेद)-creating divisions, educate him on the objective of the kings, their subject etc". What did Prahlad have to learn? He was a descended saint. Despite that, whatever Guruji used to teach him, he would recite the same back to his Gurus unwillingly. In his heart he found that knowledge useless. After a while when his Gurus were convinced that Prahlad was sufficiently educated in the diplomatic affairs of pacifying public leaders, appeasing them by giving them lucrative posts, dividing and ruling over them, and punishing them in cases of disobedience, they took him to his mother. Prahlad's mother very lovingly gave him a bath, dressed him in nice clothes and beautiful ornaments, and presented him before his father. Prahlad paid respects to his father. Hiranyakashyapu again took a happy Prahlad in his lap and tears of love started flowing from his eyes wetting Prahlad. He asked, "Son, Now tell me, what do you like? What have you learnt? What have you understood from your Gurus?
श्रवणं कीर्तनं विष्णो: स्मरणं पादसेवनम् ।
अर्चनं वन्दनं दास्यं सख्यमात्मनिवेदनम् ॥ भा. ७.५.२३
"śravaṇaṃ kīrtanaṃ viṣṇoḥ smaraṇaṃ pādasevanam,
arcanaṃ vandanaṃ dāsyaṃ sakhyamātmanivedanam" Bhāgvatam, 7.5.23
One must take the shelter of the goddess of Shri Krishna Bhakti from early childhood. Leaving devotion to the future is a grave mistake.

​Do not procrastinate saying ”I will do it tomorrow. I will do it tomorrow”. It is possible that you may not live to see the light of tomorrow. This human form even though so precious, that it is elusive to the celestial Gods, is temporary. Therefore, one must commence Krishna Bhakti right away and not leave it to the future. Taking shelter of the Lord's lotus feet is the only success of this human form. Because God is the master, friend, beloved and soul of all living beings.

​To please God, it is not required to make a lot of effort, because He is the soul of all living beings. Prahlad declared:
Shri Krishna's grace can only be obtained by selfless devotion, rest all other means are an illusion. Their result will be material. Meaning thereby that celestial forms increase ones tendencies towards enjoying sensual pleasures, other forms such as inanimate forms and forms of birds, animals etc do not have the power to grasp the Divine knowledge and philosophy. Therefore, it is only possible to achieve the ultimate objective of life in the human form, by performing devotion to Lord Krishna. Prahlad further said, "Friends! In this world or in the human form the biggest objective is to attain Lord Krishna's unalloyed devotion". 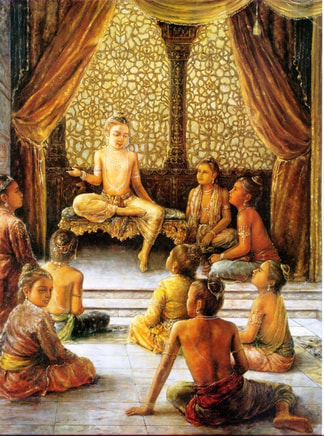 Prahald instructing his friends about God
The Asura kids asked him – “Brother Who imparted you this knowledge and When?” He informed he had obtained this knowledge in the mother’s womb. Hrinyakashyapu had gone to perform penances after Hiranyaksh was slain. It is at that time, that Prahlad was into Hrinyakashyapu’s wife Kayadhu’s womb. Indra thought – “This is a perfect opportunity! Destroy his entire family!” So, he attacked Hrinyakashyapu’s kingdom with an army of all devatas. And he also tied up the pregnant Kayadhu and abducted her. He met Sage Narada on the way. Narada Ji asked “What are you doing?” “What am I doing? I am taking my enemy’s wife to imprison her in a jail in Swarg”. Narada Ji reprimanded him saying “You fool. She is carrying a saint in her womb and if you even contemplate hurting her – Your controller- God will take you to task!”. Naradji freed her from Indra. Naradaji then took Kayadhu to his Ashram and recited philosophies from different scriptures. Prahlad heard all those lectures, memorized them and surrendered himself to Lord Shri Krishna. He became a devotee of Shri Krishna. Lord Krishna appeared to him in His divine form. All this happened inside his mother’s womb. Hearing the story, all Asura kids started lovingly admiring Prahlad. Prahlad gave them instructions on practicing devotion to Shri Krishna. Listening to Prahald’s discourses, their minds got affixed to God. 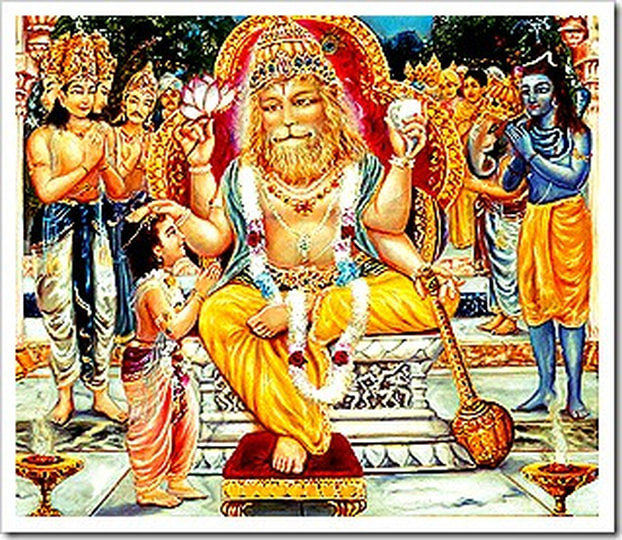 Seeing this, their Guru got scared and went and informed Hrinyakashyapu. Hrinyakashyapu started shaking in anger hearing this intolerable and unacceptable action. Since Prahlad wouldnt stop worshipping God , Hiranyakashipu ordered his men to soldiers succesded in kill Prahlad. Since none of his soldiers succeeded in killing Prahalad, Hiranyakashipu decided to kill Prahlad with his own hands. He asked Prahlad – “Where is your God? If He is omnipresent, then why can’t He be seen in this pillar?" Prahalad answered yes he is in this pillar and he sits in your heart too. At this Hiranyakashipu could no longer control his anger, he jumped from his throne with a mace in his hand and slammed the pillar with great force. At that precise moment, there was a loud noise from the pillar. It sounded as if the entire universe had exploded. A scared Hrinyakashyapu started looking here and there. Narsingh Bhagwan (half man half lion) stood right in front of him. His form was terrifying. Nobody had the strength to go in front of him. Reaching the gates of the courtroom, Narsingh Bhagwan placed Hrinyakshyapu on his thighs and playfully tore him apart with his nails. Seeing Narsingh Bhagwan’s bright and angry face, no one could muster enough courage to serve him. Brahma, Shankar etc all demi-god’s could not pacify Narsingh Bhagwan’s anger, nor could they go close to Him. Devata’s requested Mother Lakshmi to go and pacify Him, but seeing His incredible angry state even She could not muster enough courage to go close to Him.

Then The Creator Lord Brahma sent Prahlad. Lord’s anger was immediately pacified, seeing Prahlad. He picked up Prahlad and made him sit in His lap and placed His hands on his head. Prahlad became ecstatic and divine love started flowing through his heart and tears of love started trickling down his eyes.

Glory be to Prahlad- The Crown Jewel of Devotees
<- Religious Festivals (When, What, Why)