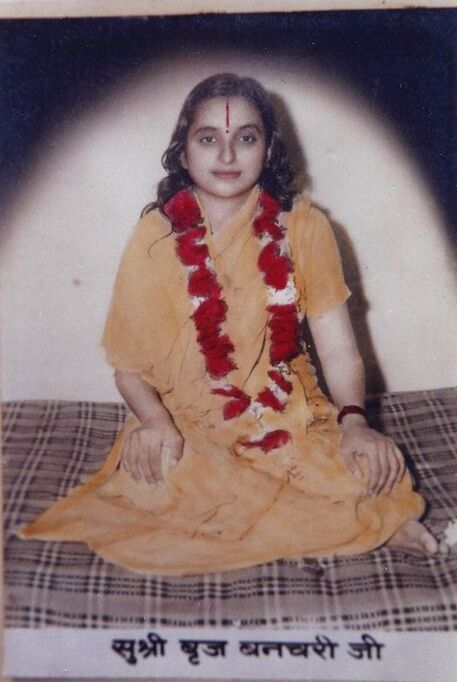 Braj Banchary Devi, founder of Shri Kripalu Kunj Ashram, is affectionately known as Didi Ji. She is one of the foremost disciples and senior-most preacher of Jagadguru Kripalu Ji Maharaj (Shri Maharaj Ji), the fifth original Jagadguru in the history of India. Didi Ji has spent her entire life in the service of her revered Guru.

Didi Ji was born in 1945 in Pratapgarh District of Uttar Pradesh, India, as the youngest child of Shri H. P. Mahabani. Mahabani Ji was an intimate devotee of Shri Maharaj Ji. Shri Maharaj Ji lived in their home like a family member for 15 years. By Shri Maharaj Ji's grace, Didi Ji grew up in very close association of Shri Maharaj Ji from her infancy and learned her first lessons in spirituality.

Didi Ji grew up to be a brilliant student. According to her interests, she earned a double M.A. in Sanskrit and Music. When Shri Maharaj Ji instructed her to become a preacher she miraculously completed her studies of the Vedas and other Hindu scriptures in a brief period of four months! In 1978 on the auspicious day of Sharad Poornima, Shri Maharaj Ji ordained Didi Ji to become a sanyasi and changed her name to “Braj Banchary”. Shri Maharaj Ji further blessed Didi Ji by entrusting her the responsibility of propagating the philosophy of divine love bliss.

In the early 1980s, Shri Maharaj Ji used to send the newer preachers to Banchary Ji to practice shloks. This seva was later given to Shyama Didi (Manjhali Didi).

As a preacher Didi Ji traveled in India and gave lectures in several cities in India for a couple of years. Impressed by her dedication and skill, Shri Maharaj Ji sent her abroad to teach the same philosophy. In 1982, Didi Ji toured Sweden, various cities in the US, and reached Canada on December 4th 1982. Shri Maharaj Ji insisted that she stay in Canada and preach there. In 1983 established the International Bhaktiyog Sadhana Society (IBYSS), a nonprofit religious organization. This organization is still spreading the teachings of Shri Kripalu Ji Maharaj and the philosophy of the Hindu scriptures through Sadhana Mandir. Since 1983 regular devotional services, special spiritual retreats and celebrations of religious holidays are being held in this temple thus benefiting many aspirants.

In 1986, Didi visited UK for a lecture tour. Seeing the success of that tour Didi Ji wanted to give the devotees an opportunity to continue to do devotion. With that purpose in mind Didi Ji established IBYSS in England and spearheaded this effort for several months. After that the responsibility of UK-based organization was passed on to other preachers of JKP, who are successfully continuing this mission.

Didi Ji's teachings have deeply touched thousands of families over the years. Children of some of those families were so deeply touched that they became preachers of JKP and have dedicated themselves to serving Shri Maharaj Ji's by spreading his philosophy all over the world. 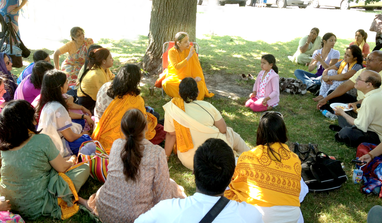 In 2007, when Shri Maharaj Ji visited Houston, He instructed Didi Ji to establish an organization in the city. Later in 2007 Shri Kripalu Kunj Ashram, a nonprofit charitable organization was established in Houston, Texas. Since then regular devotional services like kirtan, spiritual discourses are organized in the ashram. Annually, 12-hour long intensive sadhana sessions are also organized, where devotees get to drink the nectar of divine love bliss.

Didi Ji conducts spiritual retreats every year at the end of December and July. These retreats are organized to give practical instruction in sadhana bhakti, and teach how to integrate this experience in one’s daily life. Didi Ji provides ample time in the retreats for question and answer sessions, which many testify have removed lifelong doubts about their spiritual path. These family retreats are a venue for many other activities like devotional plays, talent shows, and dances. Children are also offered opportunity to learn harmonium, dholak (Indian drum) and manjira (cymbals). During these times, Didi Ji freely shares the experience of her lifelong association with Shri Maharaj Ji, as each and every part of her life is related in one way or another to Shri Maharaj Ji.

"Didi Ji is a unique sanyasi and spiritual teacher as she is dedicated with absolutely every fiber of her being to the teachings of her divine Guru. There is no doubt that being raised from earliest childhood around Sri Maharaj ji, and being cared for and repeatedly blessed by him throughout her whole life has granted her a special divine place among Sri Maharaji ji's closest family and associates.

Being around her, one can surely sense she has no one and nothing in her life but Sri Maharaj ji. Her uncompromising attitude with the material world is a blessing to behold as she tirelessly helps all those who come to her for guidance. Her lectures are spontaneous and right to the point, always taking the listeners to deeper and more profound levels of surrender and realization of the divine presence.

One of the many benefits of her association for me has been that the path to our universal divine goal has been cleared of obstacles, made more enjoyable, and simultaneously made simpler than it was before meeting her. Didi Ji's ability to open the receptive listener's mind to even the most intimate loving exchanges between the Lord and His devotees is enlightening and amazing.

I am grateful to be blessed by her association, and always feel helped by being in her satsang."   DB, Houston, Texas, USA

“Braj Banchary Didi Ji has been a source of tremendous inspiration for me. The first time she conducted satsang at our home, the way she explained philosophy and resolved your doubts made me feel as if Shri Maharaj Ji himself was there. Her kirtan is melodious and fills you with divine love. She talks fondly of her childhood association with Shri Maharaj Ji. She paints a living picture of Shri Maharaj Ji's life from those days which seems to come alive. Learning about Shri Maharaj Ji from Didi Ji is a unique and a very pleasant experience.It seems the philosophy of divine love is part of the very fiber of her being.”