"The governors of the uncountable brahmands emanate from a part of Shri Krishna, and they survive with the support of His single breath. What more can be said when even MahaVishnu is a revelation of just a single expertise (कला) of Shri Krishna." This assertion means that Shri Krishna is the Supreme God and all others are His descensions.

These statements naturally create confusion in minds of the seekers who wonder - “Are MahaVishnu and Shri Krishna two beings or are They the same in different forms ?”

Thus, it is ascertained that, MahaVishnu is the revelation of Shri Krishna’s power’s power. That’s why it is said -
Conclusion

There are two kinds of descensions of Shri Krishna i.e. Yugavatar (युगावतार) Krishna and Swayam (Himself) Shri Krishna.

Yugavatar and MahaVishnu are the avatars whereas Swayam Shri Krishna (स्वयं श्री कृष्ण​) is called Avatari or the source for all Avatars (descensions). Avatari and all His Avatars (source of descensions) possess unlimited divine bliss and have the same powers. But Swayam Shri Krishna alone is the ultimate governor of all the divine powers whereas the Avatars are not the Supreme controller of those powers. In other words, Lord Krishna bestows all His powers to the Avatars and can He can take it back any time.

All these testimonies prove, there is One Supreme God and all other avatars are the manifestation of His power or His power’s power's power aka descensions of Tritiya Purush. 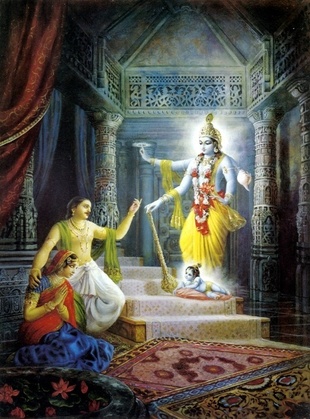 In the jail before Shri Krishna MahaVishnu appeared in front of Devaki and Vasudev
Shri Krishna Himself descends after one kalpa. Shri Krishna, who descended 5000 years ago as the son of Yashoda and Nand, was Swayam Shri Krishna. Every time He descends His sole aim is to impart divine love to the deserving souls. During His descension other actions - like killing demons, helping in Mahabharata - are performed by Yugavatar through the divine form of Swayam Shri Krishna.

Q. If Shri Krishna, who descended 5000 years ago, was not a descension of Vishnu Ji then why did He reveal His Vishnu-form to Devaki?

Shri Krishna is Almighty Brahma-Supreme God. He can reveal Himself in any form at any time. He showed His divine form to Devaki to assure them “I am God. I have come in this form to show you that I'm fulfilling my boon and satisfy your desire of being My mother”. After appearing on the earth, as per the desire of both Devaki and Yashoda, he would hid His divinity and acted like an ordinary human child. Moreover, He had to put forth some important ideals for human beings to follow.
Love our Publications!!