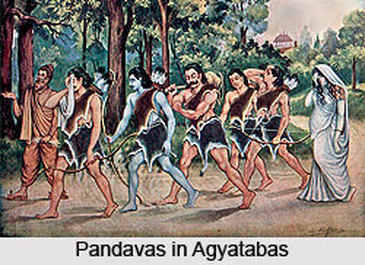 This episode is illustrated in the Aranya Parva of the great epic Mahabharata.

The 5 sons of King Pandu along with their wife Draupadi were nearing the end of their twelve-year exile in the forest. They had just entered into the thirteenth and final year of their exile, during which they were required to remain in complete anonymity. As the 5 brothers were roaming in the dense forests trying to keep their identities a secret, they felt tired and thirsty and decided to sit down to rest under the shade of a large tree.

The eldest Pandav Yudhishthira, asked the youngest brother Nakula to go and fetch some water for everyone to drink. After walking around a little distance, Nakula spotted a beautiful lake with clean blue water flowing through the lake. As he bent down to fill up his pitcher, he heard a loud powerful voice saying,
मा तात साहसम् ... पिबस्वा च हरषस्व च  ॥
Mā tāta sāhasam... Pibasvā ca haraṣasva ca 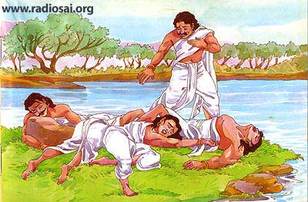 Yudhisthir finds his fours brothers lying dead at the banks of the lake.
Dare not touch the water without answering my questions, young man. . .

It was the voice of Yaksha, who lived in the lake. Nakula did not pay any attention to the voice and bent down to drink water. As soon as he drank the water, the Yaksha drew Nakul into the water and sucked the life out of him.

When Nakula did not return for some time, Yudhishthira sent Sahadeva to look for him and bring water. Sahadeva arrived on the scene and was shocked to see Nakula lying dead. To fulfill his brother’s instruction to bring water, he bent down to fill his pitcher. As soon as the pitcher touched the water, he heard the same warning message, which he ignored and was killed by the Yaksha.

Now it was Arjuna's turn to go look for his brothers and fetch water. Arjun carried his Gandiva bow with him. On arriving at the lake he found his brothers lying as though dead. To follow his older brother’s instruction, he tried to fetch water from the lake and was warned by the Yaksha. Arjuna did not ignore the warning, instead challenged the voice to identify and present himself in front of Arjun. When no-one presented themselves, he bent down to fetch the water and was killed by the Yaksha.  Bhima met with the same fate.

Eventually Yudhishthira decided to go and look for his brothers. When he arrived at the lake, he was faced with the dreadful sight of his four brothers lying dead at the banks of the lake. 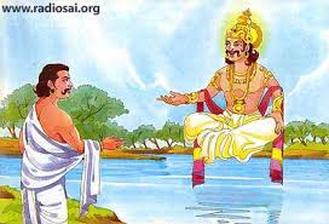 The voice replied: "Yudhishthir, I am a Yaksha"
There are neither signs of violence on their bodies, nor foot-prints anywhere. The killer must be a supernatural being.

Convinced that this has been caused by some supernatural being, he approached the edge of the water to fetch some water to begin the last rites for his brothers. He was startled by a voice.  “I am the cause of your brothers death. If you drink the water from this lake without answering my questions, you will meet with the same fate."

Yudhishthira asked, "Who are you, O Noble one? Are you a Rudra, Vasu, or Marut? You must be very strong as neither Gods, Gandharvas or Rakshasas could stand up against my brothers.  Why did you kill them? What do you want?

The voice replied: "Yudhishthir, I am a Yaksha". As he heard these words, Yudhishthira saw a massive image with monstrous fiery eyes and a thunderous roar, emerge in front of his eyes". The Yaksha said, “I had warned your brothers. But they would not listen to me. They are all dead. This pool belongs to me and unless you answer my questions you cannot touch the water in this pool”.  Yudhishthira replied,
न चाहंकर्णये यक्ष तव पूर्व परिग्रहम् ।
Na Cāhaṁkarṇayē yakṣa tava pūrva parigraham
O Yaksha, I have no desire to violate your property
पृच्छ माम्
pr̥ccha mām
Yudhishthira respectfully folded his hands and stood humbly in front of the Yaksha and requested him to ask his questions.

Yaksha was very pleased with Yudhishthir’s humility and asked him 60 questions covering the essence of deep knowledge of the Vedas. The answers to these 60 questions are very precious and enlightening for us.

The first and most important of those questions was
किमाश्चर्यम ।
kimāścaryama.
What is the biggest surprise in the world? 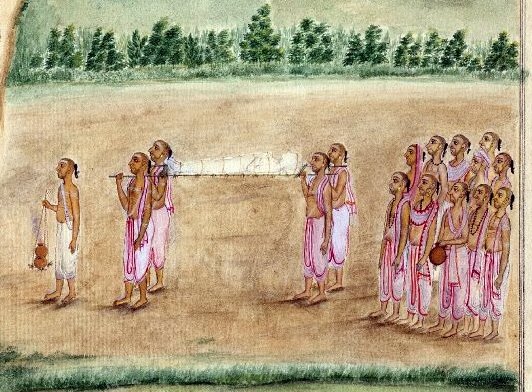 We are witnessing that living beings of all ages are departing from this world every-day. Yet those, who are alive, do not believe that they will die. They consider themselves to be immortal! Can there be any bigger surprise than this?

This answer of Dharmraj Yudhishthir reminds us that body is mortal. Soul will have to leave this body without any prior notice. It is also each of our's personal experience that we see and hear about people of different ages dying everyday, yet we do not accept the fact that we will also die one day. And when will that fateful day arrive, no-one knows. Because we do not realize the transient nature of our own life, we continue to postpone our spiritual practice that we know will lead us to our real goal - attaining boundless, ever-lasting, ever-increasing bliss. Instead we keep getting more and more engrossed in the pursuit of material pleasures which are temporary in nature and ultimately result in sorrow.
This story awakens us to the truth regarding the transient nature of the body and inspires us to strive to attain real happiness as early as possible, as no-one knows when this body will be taken away. Adi Jagadguru Shankaracharya J Maharaj had said
यदहरेव विरजेत् तदहरेव विरजेद् , गृहाद्वा वनाद्वा ब्रह्मचर्याद्वा ॥
Yadaharēva virajēt tadaharēva virajēd, gr̥hādvā vanādvā brahmacaryādvā.
Whenever you get that awakening, regardless of who you are - a child, house holder or sanyasi, renounce the world and proceed towards the ultimate goal of your life.