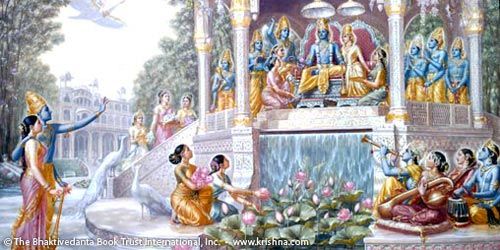 In Vaikunth devotees respect Lord MahaVishnu and bask in His glory. But, they cannot have any closeness with Him.
Devotees in Baikunth Lok, worship Lord MahaVishnu and sing His glories. But, they do not enjoy physical intimacy or closeness with Him. This Maha Vishnu form of Shri Krishna is known as Paramātmā (परमात्मा). Maha Vishnu is ever adorned with four arms, each holding a conch, disc, club and lotus. His permanent divine abode is Baikunth Dham. He reveals His name, form, abode and attributes but does not exhibit any pastimes or have any associates.

Baikunth is a place of unlimited majesty. His divine form with four arms, the radiance (तेज​) and speed (गति) of His disc (सुदर्शन चक्र), the club (गदा) are constant reminders that He is omnipotent God. Those who follow the path of Yoga and the devotees, who worship Lord Vishnu, go to divine abode of Baikunth where they get a beautiful divine form (2) similar to that of Lord Maha Vishnu. In Vaikunth they respect Him and bask in His glory. But cannot have any closeness with Him. 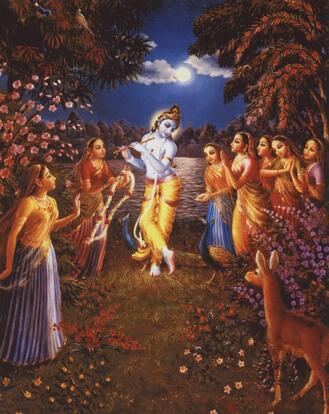 Shri Krishna called Gopis by playing His flute
The third form of Shri Krishna is known as Bhagavāna (भगवान). His divine abode is Golok. In this form Shri Krishna conceals His majesty (ऐश्वर्य​) then descends on Earth in a human form with the sole purpose of distributing love to deserving souls. He is endowed with names (नाम), form(रूप), pastimes(लीला), attributes (गुण), abode (धाम​)and His associates (परिकर​).

In this form, the Supreme God hides His divinity and comes down to the level of the common man. Then He showers love abundantly on His devotees through ever-new fun-filled pastimes. His pastimes are most edifying as well. Thus, it is the sweetest form of God. Therefore, worshiping this form is the easiest way to realize God. In this form devotees do not fear the majesty(ऐश्वर्य​) of Paramātmā. Devotees who worship Lord Krishna in this form, do not need to walk the arduous path of Gyan Marg to reach the apex of renunciation (see Difference between the vairagya of gyani and bhakt). Those who worship this form of Bhagavāna attain divine bliss and Golok Dham or Saket lok.

Examples of this form are Shri Krishna, Shri Ram.

It seems that Brahma, Paramātmā and Bhagavāna are the same. Are they?

Yes, just like water, ice and vapor are three forms of water  with different properties. Brahma, Paramātmā and Bhagavāna are different aspects of the same Brahma-Supreme God. Unlike material water which can exist in one state at any given time, all three aspects of God have coexisted since eternity. Also, Their attributes are eternal too.
चयस्विषामित्यवधारितं पुरा ततः शरीरीति विभाविताकृतिम्।
विभुर्विभक्तावयवं पुमान इति क्रमादमुन्नारद इत्यबोधि सः ॥
शिशुपाल वध​

Why are there 3 aspects of God?

People have different tendencies based on their sanskaars. Because God is a wish-granting tree (kalp-vriksha कल्प वृक्ष​), He gives whatever one wishes. He is gracious that is why He has these three forms to suit people's devotional sentiment called bhav. He has also described the outcome of worshiping each of the forms. And He lets Jeev make the choice of which form to worship.

There is only one Supreme Entity - Shri Krishna. He has eternally existed in multiple forms. Devotees worshipping all different forms of Shri Krishna attain God realization. Those seekers, who wish to follow the easiest path which delivers the sweetest results, choose to worship Bhagavāna. Performing bhakti to this form of God delivers the highest kind of bliss, a devotee can aspire for. So, one should know about all the forms of God and the characteristics associated with each form and choose the one that suits one’s temperament.
If you enjoyed this one, you might also enjoy