The personal form of Shri Krishna, the Brahma-Supreme God is known as Paramatma also called Lord Vishnu. He is the epitome of majesty. Another personal form is Bhagavan, wherein His majesty is concealed by love. In this form as well He manifested Himself with three different characteristics.
1. He revealed the divine majesty and a tinge of love in Dwarika.
2. He revealed His loving form in Mathura with a glimpse of Majesty.
3. Whereas in Braj He completely concealed His divine majesty and showered only love on the inhabitants of Braj.
रसो वै स: ।
raso vai saḥ
"He is bliss (rasa)".

This definition applies to the formless aspect of God as well. In Braj, by the grace of Shri Radha, He is known as
रसो वै रसतमः
raso vai rasatamaḥ 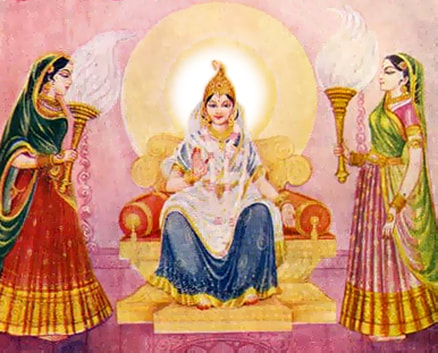 "He is the unfathomable apex of nectar of love".

Now He is not just rasa instead, by the grace of Shri Radha, Shri Krishna is the pinnacle of bliss or rastamah (रसतमः). In the rastamah (superlative of rasa) form He is engaged in loving pastimes with Shri Radha, the Gopis, Nand and Yashoda, and the cowherd boys. There, He profusely and exclusively showered the nectar of love, that is why He was referred to as rasik shiromani (रसिक शिरोमणी) which means the supreme embodiment of divine love.

Shri Krishna is the beholder of innumerable divine powers. The power of divine-love is ranked as the highest of all those powers and is very unlike other powers. Every power, by its nature, remains under the control of the power-holder. But the power of divine-love is so unique that it does not remain under His control. Rather it controls its power-holder Shri Krishna Himself. All the pastimes of Braj are the example of this fact. 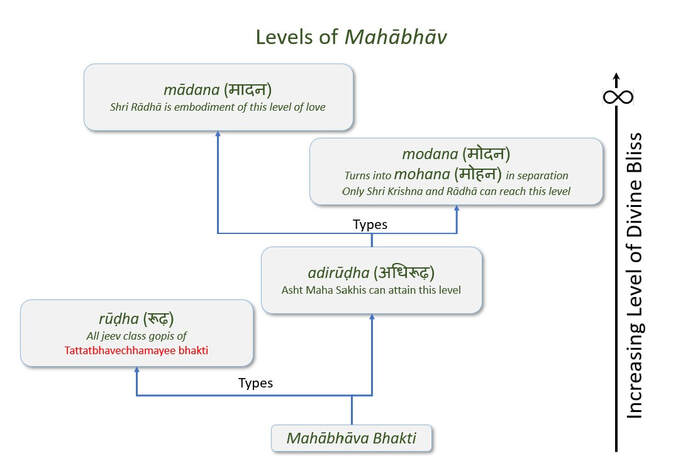 Another aspect of this philosophy is that all the powers of God are always divine and personified. There are eight personified levels of divine love power. The highest level of love is called mahābhāva (महाभाव). Mahābhāva is divided into two branches called rūḍha (रूढ़) and adirūḍha (अधिरूढ़). Only the eternal associates of Shri Radha known as the Gopis are at this level.

Adirūḍha is higher than rūḍha, and it is divided into two branches called modana (मोदन) and mādana (मादन). Modana is the apex of the collective nectars of divine love. Only Shri Krishna and Rādhā are at this exclusive stage of love. The same modana becomes mohana in the ecstatic state of separation. Yet, above all these stages of love there is the stage of mādana mahābhāva (मादन-महाभाव), which is exclusively reserved for Shri Rādhā. Shri Rādhā is the supreme embodiment of mādana-mahābhāva.

Shri Radha is pleased only when Her beloved Shri Krishna is pleased. This means practice of bhakti to seek self-happiness is contrary to the supreme example of Shri Rādhā's divine selfless love. The perfected state of this love is found only in the Gopis who are eternal associates of Shri Rādhā and their associates.

The devotees who practice sadhana bhakti and follow this example of Shri Rādhā's love, get to enjoy the supreme bliss of mahārāsa (महारास). Mahārāsa is the divine leela where Shri Radha-Krishna incessantly shower unlimited nectar of every kind of divine-love-bliss. There is no higher bliss beyond this experience. Even Lord Shankar assumed the form of a Gopi in order to get the opportunity to participate in this divine pastime. So, those who selflessly love Shri Krishna as their Beloved and Shri Radha as their swāmini (Governess) can participate in mahārāsa, but only with the permission of Shri Rādhā.

The devotees who follow the example of Shri Rādhā's love can be classified into 2 groups
Devotees who wish to reach up to this level of devotion have to follow the above mentioned philosophy of love under the guidance of a Rasik Saint, who guides the devotees on this path with clear revelation of the secrets of this philosophy.

You can read a complete description of this philosophy in "Prem Ras Siddhant" (The Philosophy of Divine Love) by Jagadguru Shri Kripalu Ji Maharaj.
Suggested Reading