Table 1
Yet out of sheer graciousness of the Supreme Lord, He makes insignificant jeev as great as Himself. Altogether there are only three entities in existence: God (brahma), the souls (jeev) and the cosmic energy (maya).

All of these are eternal and everlasting. Both God and the jeev are conscious whereas māyā is inert. Although, maya is eternal yet Sansaar-The World created by maya is temporary.

The jeev and Brahma are both conscious and eternal yet there are vast differences between them. Listed in Table 1 are a few of those differences.
There are many forms of the same Almighty Supreme God. We can divide them mainly into two forms:

This is the imperceptible, all pervading, formless aspect of Supreme God. All powers of God are dormant in this state except for the power of sat (the unlimited power of existence), chit (the unlimited knowledge) and ānanda (unlimited divine bliss). That is why the abstract form of brahma is called the form of saccidānanda. The followers of the path of gyan or non-dualism (gyanis) worship this aspect of God to attain the ultimate goal of absolute liberation called sayujjya mukti. After being liberated from the clutches of māyā, their soul merges into the formless aspect of Supreme God. From then on is drowned in divine bliss. The extent of that ﻿bliss﻿ never changes. 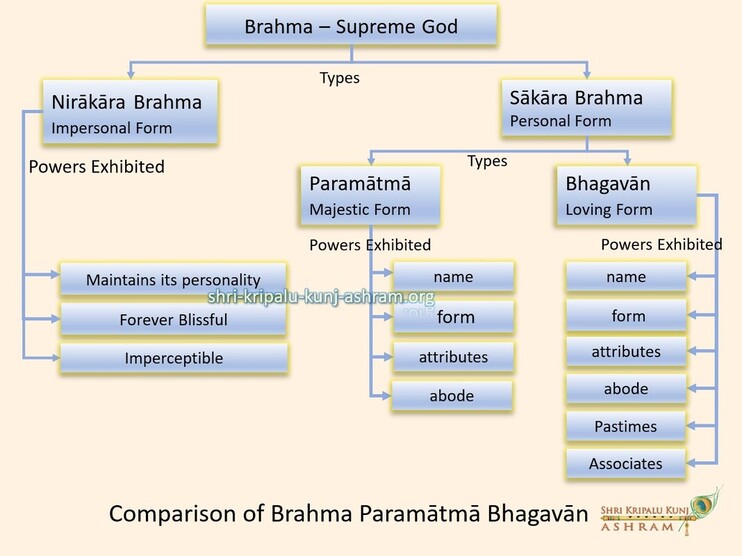 The appearance of the same sākāra brahma on the earth in a human-like form is called Bhagavān. In this form, the Supreme Lord hides all of His divine powers and reveals the unique power of divine love through His form, name, attributes, pastimes and associates.

​This form of God is what is adored by devotees because God's love potency is predominant in this form. So, the devotees drown in their feelings of love for God. They forget about His divinity as God and enjoy intimate loving relationships with Him with any of the four bhav; as their Master, Friend, Son and Beloved. The nectar of this form of God and freedom of loving Him, without an inkling of His divine status as almighty God, is unfathomable. That is why devotees reject the bliss of liberation and the bliss of Vaikuṇṭha. Even atmagyanis (see Gyan) reject their brahmanand and become devotees e.g. being Shukdev Paramhans, King Janak, Shri-Krishna's friend Uddhav etc. But there hasn't been a single bhakt who became a gyani.

The Supreme God is known as Lord Kṛṣṇa. There are many descents of  Supreme God. They are all swansh of Shri Kṛṣṇa and all all God. All those manifestations are revelations of one power of the Supreme Lord. That’s why all other forms of God are called avatāra (अवतार​) or descents, whereas Lord Kṛṣṇa Himself is called avatārī (अवतारी) which means source of the descents.

Since, He is the first manifestation of Shri Krishna He is also referred to as pratham purush (प्रथम​ पुरुष​).

Garbhodaśayī Mahavishnu (गर्भोदशायी महाविष्णु) is in turn the revelation of one power of Karaṇārṇavadaśayī Mahavishnu. Since, He is the second manifestation of Shri Krishna He is also referred to as dwitiya purush (द्वितीय​ पुरुष​).

Kṣīrodaśayī Mahavishnu (क्षीरोदशायी महाविष्णु) is the revelation of one power of Garbhodaśayī Mahavishnu. Since, He is the third manifestation of Shri Krishna He is also referred to as tritiya purush (त्रितीय पुरुष​).

The Supreme Brahma - Lord Krishna  descends only once in every kalpa (day of Creator Brahma). 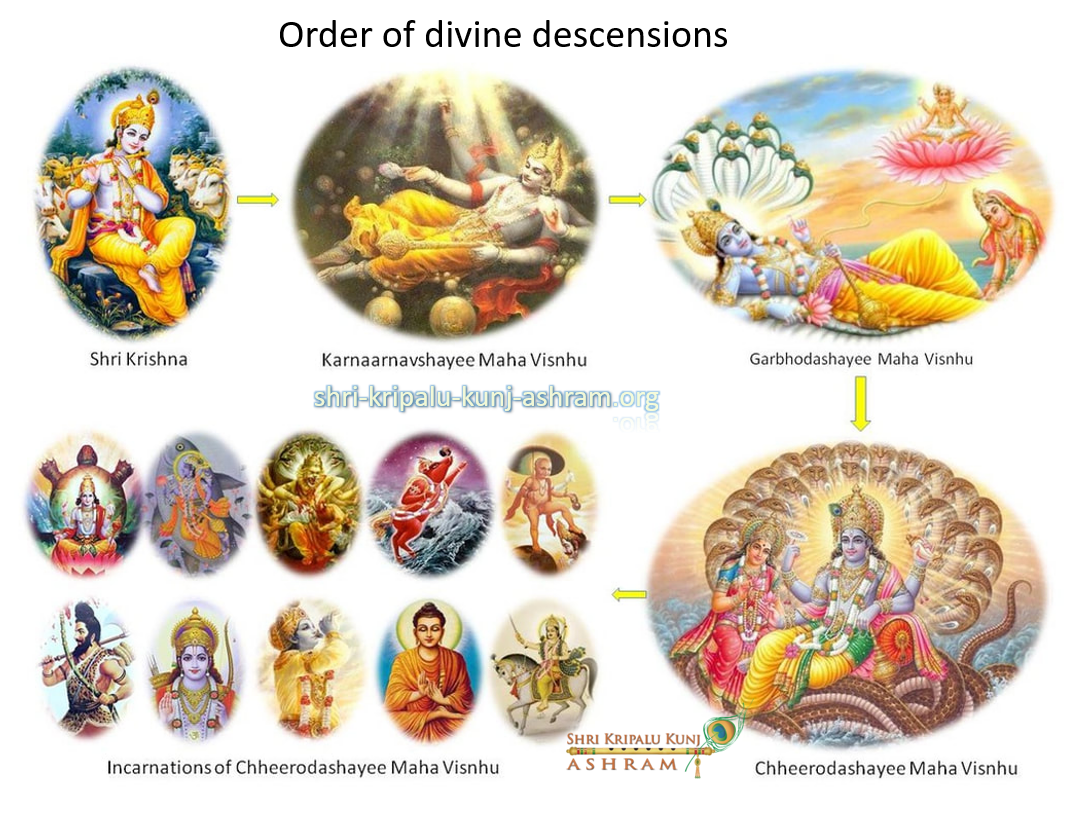 The order of descensions of avatars
Please Note: In every kalpa there are 994 (1) dwapar yuga and in every dwapar yuga Shri Kṛṣṇa descends. However, in 993 (out of 994) dwapar yuga Kṣīrodaśayī Mahavishnu descends as Shri Kṛṣṇa. This avatāra does leelas of majesty e.g. Mahabharata but the most intimate pastimes of the Supreme Brahma - Shri Krishna are not done by these avatāras. Those intimate leelas happen only when Radha Krishna - The Divine Couple descend together in the 28th dwapar yuga of the 7th manvantar of the kalpa. In this kalpa Supreme Brahma - Shri Krishna Himself descended with Shri Radha 5000 years ago and did the leela of Mahaaraas (2) amidst many other intimate leelas.
In every chaturyuga, which is 4,320,000 human years, several avatāras of God descend on this earth. Since, these avatār descend in every yuga those descents are called yugāvatāra. Being uninformed of this secret, many think Mahāviṣṇu is "Supreme God." Scriptures clarify that Kṣīrodaśayī Mahāviṣṇu is on the fourth level of supremacy.
Bhagavan-Shri Krishna is the Supreme-Brahma. One can attain divine-love-bliss only upon attaining Lord Krishna. Attainment of divine-love-bliss is possible only with His grace. His grace is attained by exclusively, sincere and constantly practicing Sadhana Bhakti. Also, one must desire exclusively for the Lord's happiness. Selfless love is essential (3) to practice devotion and receive the grace of brahma Lord Krishna.
If you enjoyed this one, you might also enjoy