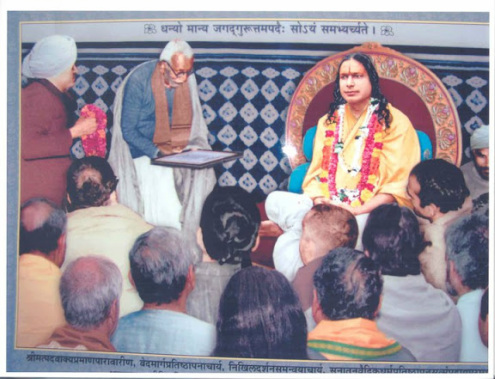 What does "original (mool) Jagadguru" mean? The word jagad (जगद्) means the entire world. Guru (गुरू) means the one capable of dispelling our ignorance and granting divine knowledge. Such a Spiritual Master who is unanimously accepted by all spiritual scholars of his age as the supreme spiritual teacher is called a Jagadguru. Such a saint is an original Jagadguru as the title is directly conferred on Him. Once that saint leaves this world, his most qualified disciple inherits his Guru's seat as his successor. Since the successor has inherited the position of his master, he is also called a Jagadguru. However he has not earned this title by exhibiting his divine spiritual knowledge, hence he is not called an “original" Jagadguru.

Who is qualified to confer this title? This title is not a degree that can be attained by going to a school. When the world is engulfed in the darkness of ignorance and the true meaning of religion has been distorted and people are totally confused about what path to follow, out of His merciful nature, God sends a divine personality or Saint, on this earth. When this Saint propagates the true meaning of religion, he reveals divine knowledge and the path of devotion or love for God (also called bhakti).

Why is Shri Maharaj Ji referred to as the fifth original Jagadguru? In 1957, the Kashi Vidvat Parishat of Varanasi, India, an organization comprised of 500 of India's topmost Vedic scriptural scholars, invited Shri Maharaj Ji to engage in a scriptural debate to test his level of understanding. First, Shri Maharaj Ji was requested to speak for two hours a day for ten days on scriptural topics. At the end of his lecture series, the debate was scheduled to start. On the seventh day, the lectures were stopped and the scholars unanimously decided that Shri Maharaj Ji's knowledge of the scriptures was unprecedented and could not be acquired by an ordinary human being, even in thousands of lives. They agreed that His knowledge was divine. This organization unanimously conferred upon him the title of “Jagadguruttam” (supreme Jagadguru) along with the titles listed below:

Srimad-pad-vakya-praman-paraavareen - The one who is proficient in all philosophies propounded in “Vyakran” (Pada), “Vaisheshik” (Vakya), and “Nyay” (Pramaan);

Ved-marg-patrishtapan-acharya - The supreme teacher who establishes the true path of God realization as propagated by the ancient Hindu scriptures and Vedas;

Nikhil-darshan-samanvay-acharya - The one who reconciles all philosophies propounded in the Hindu scriptures and Vedas;

Sanatan-vedic-dharm-sansthapan-sat-sampradaya-param-acharya - The supreme teacher who promotes the eternal Vedic religion and the supreme master of all the authentic Vedic schools of philosophy;

Bhakti-yog-ras-avtar - The one who is the personified descension of bhakti yoga and the nectarean bliss of divine love.

At present there are eleven main religions in the world. They all appear to propagate contradictory views regarding the path to the supreme goal of Happiness. In fact, there are contradictions within every religion. Jagadguru Shri Kripalu Ji Maharaj reconciles all these seemingly contradictory views and expounds a universal path that respects all religions and faiths.

It is our greatest fortune that we may benefit from the knowledge, grace and association of the fifth original Jagadguru in the history of the age of Kaliyuga, Jagadguru Shri Kripalu Ji Maharaj, whose divine knowledge is illuminating the entire world with its radiance.
Next topic Braj Banchary Devi