Know the Results of Actions 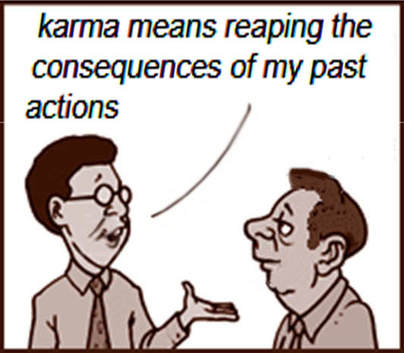 Broadly speaking, all things in the world are categorized as being either good or bad. Even the karma (actions) that one performs, is categorized as:


Within the spiritual realm, the very first thing to understand is that the mind is the doer and thoughts are actions. Each thought that crosses our mind constitutes an action. Every action bears a fruit and one has to undergo the fruits of those actions (karma). In spiritual records, only actions performed by the mind are noted. Neither the karma performed by the action-oriented organs (karmendriya) nor the karma performed by the sense-oriented organs (gyanendriya) are considered karma. e.g. if one decides to commit a murder, but does not eventually do so, no negative action is noted in the world. However, in the spiritual world, the thought of planning a murder is synonymous to have actually committed that action and is recorded as such, even though the murder was not physically performed.

Bhagwat Gita and other ancient scriptures firmly establish the fact that good karmas bear good fruits and bad karmas bear bad fruits. But there are finer nuances within the theory of karma that need to be understood. Shri Maharaj Ji explains this theory in a very simple manner.

2.   Good Karma: Based on their outcome, good karmas can also be divided into 2 categories.

a.       Sattvik karma (सात्त्विक​ कर्म​): Vedas tell us about the do’s and dont’s of the spiritual realm. The righteous actions prescribed in the Vedas are called punya (पुण्य​). Examples of such actions are truth, non-violence, love, sympathy, mercy, honesty etc. These karmas are inspired by Sattvik (good mode) of Maya.
सत्त्वगुणी पहिचान गोविंद राधे । मानस शान्ति जितेन्द्रिय बता दे ॥
sattvagunee pahichaan govind raadhe .maanas shaanti jitendriy bata de .
“Those dominated by Sattvik guna have peace of mind and have control over their senses”. The consequence of such actions is life back on earth in various life forms. 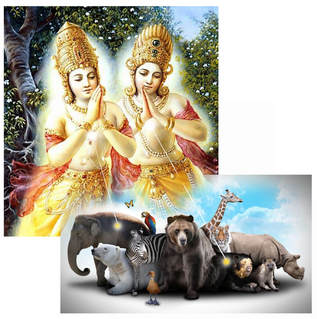 “Upon living in celestial worlds for the allocated time, they are kicked out of those worlds onto the earth and made to suffer in the cycle of birth and death for millions of lives again.”

Even though righteous karma are considered better than bad karma (rajas and tamas), it is not considered wise to expend so much effort to learn and follow the rules of the Vedas. Why? Because this ultimately results in misery.

However, amongst the three karmas - tamas, rajas and sattvic, sattvic karma is considered superior to the other two for following reasons. By practising sattvic karma


So the question still remains Which action will eradicate all misery forever? There is another type of karma which is described below.

b.      Gunateet karma (गुणातीत कर्म​)- The karma which are beyond the three modes of Maya (sattvic, rajas and tamas) are devotional actions (bhakti). These actions take us towards God realization. In scriptural language it is called “Gunateet Dharm” or “Spiritual Dharm”. It recommends –

i.       Take shelter at the lotus feet of a God-realized soul, who is referred to as a real saint or Mahapurush (see Saint or Imposter to distinguish the two). Because only the one who has reached God can lead us to God. The Vedas say:
परीक्ष्य लोकान् कर्मचितान्ब्राह्मणो निर्वेदमायान्नस्त्य कृतः कृतेन ।
तद्विज्ञानार्थं स गुरुमेवाभिगच्छेत् समितपाणिः क्षोत्रियं ब्रह्मनिष्ठम्॥ मुंड.१ मुं.२ खंड. १२ मंत्र​
pareekshy lokaan karmachitaanbraahmano nirvedamaayaannasty krtah krten.
tadvigyaanaarthan sa gurumevaabhigachchhet samitapaanih kshotriyan brahmanishtham. mund.1 mun.2 khand. 12 mantr
ii.      The practice of devotion, under the guidance of such a pure saint will purify our mind and transform it into a divine entity. Only then will the mind be infused with divine bliss and divine vision of God and become free from the bondage of Maya. Once we are liberated from Maya, all the problems created due to Maya, like rebirth, sufferings of body and mind (panchkosh, panchklesh, trikarm, tridosh, trisharir etc.) will be annihilated for ever.

We have been tirelessly striving to attain the aim of life which is everlasting bliss. Furthermore, our experience from innumerable past lives proves that there is no happiness in this Sansaar-The World. God alone is the embodiment of bliss and the attributes of Maya are contrary to those of God. Human beings are rational and have been blessed with an analytical mind, hence it is imperative that we take advantage of our experience and listen to the teachings of the scriptures and saints, to attain that bliss. All other actions including austerity, pilgrimage, fasting etc. cannot lead us on the path of bliss.

We must contemplate on the words of the great poet saint Tulsidas Ji  –
सब साधन शून्य सम गोविंद राधे । प्रेम अंक बिनु सब शून्य बता दे ॥
राधा गोविंद गीत २२७४
All religious practices are like a collection of numerous zeroes without a leading number One. Love for God is that  leading number One, without which uncountable zeroes have no meaning. Similarly without having love for God, practicing all other measures like fasting, austerities, pooja etc are meaningless and offer no benefits.
- Jagadguru Shri Kripalu Ji Maharaj
If you enjoyed this one, you might also like