The following 7 material planets are called urdhav lok (उर्ध्व​ लोक) or upper planets. In the physical space these lok are stacked one above the other with Bhoolok being the lowest and Brahmlok is on the top. Our planet earth is also included in these 7 planets. Some of these lok are subtle whereas as some are gross therefore they can be experienced with our senses.

Bhoo lok (भू लोक) has many names; Earth or Human planet, mirtu lok, manushya lok. This world can be experienced by our senses. Countable jeev live here on the earth in a wide variety of life-forms . Based on where they live, they can be categorized into 3 categories
Another classification of living beings on earth is based on mode of birth

Bhuvah lok (भुवः​ लोक​) is the space between earth and the sun and is also called Pittrilok (पितृलोक). This lok is a collection of many celestial bodies. Of the numerous bodies in this lok, 5 bodies are well known namely Dhruva lok, Sapt rishi lok (abode of 7 saints), zodiac stars (Nakchhattra Lok), Chandra lok (moon) and Soorya lok (sun). The Sapt Rishi lok is the abode of seven famous Rishis and it is situated 200,000 yojan below Dhruva lok, which keeps revolving around Dhruva Lok.

Many spiritually elevated humans beings dwell in this lok. They help the celestial-gods in various ways. Depending on the quality of service rendered to the celestial in higher planets, they may attain place in Swar lok (heaven). If they excessively indulge in luxuries of that planet they will be sent one level lower to Bhoolok as in the form of human beings. 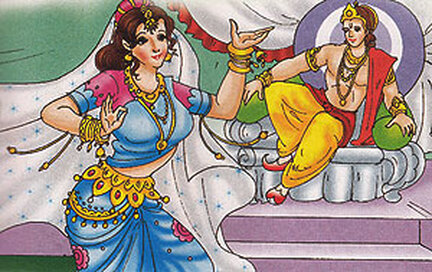 King of celestial abodes Indra lives in the svar lok
Svar lok (स्वर लोक​) is located between the sun and pole star at the peak of Meru Mountain which is situated at the center of the brahmand, at the height of 80,000 Yojan. It is planet of maximum opulence. Though this lok is also made of Maya yet it is subtle and cannot be perceived by our senses. Those who perform good deeds according to the ideals of the Vedas, attain this lok for a limited time according to the amount of their good deeds.

The king of heaven is Surendra or Indra, who is the Lord of Rains. Apsaras (celestial nymphs and dancers), Vasus, Gandharvas (master of celestial music), Varun the devata of ocean, Kuber the king of Sumeru Mountain (mountain of gold) etc many devi (goddesses) and devata (gods) live in this lok.

The celestial devi-devatas who live here don't have any physical afflictions like illnesses or aging. There body is ever youthful, beautiful, fragrant and strong. They walk above the ground, they don't cast a shadow, their eyes don't blink, they don't need to eat and don't need to excrete. They can procure any material object by resolving to get it. They are endowed with many super human psychic powers, have space crafts and mystical weaponry e.g. Thunderbolt (vajra) of Indra. At their will they can appear anywhere and even appear in multiple forms. These celestial beings, even the most ordinary Devi or Devatas, are thousands of times superior than humans in scientific as well as in spiritual pursuits but they don't have the right to perform fruit-yielding actions (see Karma).

Mahar lok (महर लोक) is the expanse of Maharlok is 10,000,000 Yojan. It is place of sages and seers such as Bhrigu and Narad Ji etc.

Jana lok (जन लोक) exists above Mahar lok and the expanse of Jana lok is 20,000,000 yojan. It is the abode of the eternal illustrious sages e.g. Kumaras.

Tapo lok (तपो लोक) is further four times bigger in size than Janalok. Videh (bodyless) Viraja and many other devatas reside in this lok.

Satya lok (सत्य लोक​) is the highest material planet and is also called Brahmlok. Lord Brahma, the creator of the world owns this planet. His consort Goddess Saraswati and other spiritually elevated soul may reach this planet after being free from the bondage of Maya. During Maha pralaya the inhabitants of Satya Lok, enter the divine abode of Maha Vishnu i.e. Baikunth which is situated 26,200 yojan above Satya Lok. And, after recreation of the entire brahmand they come back to this lok.

This is a divine abode but it is inside the brahmand which is created by the cosmic energy of God called Maya. There is an ocean of milk (kchheer sagar), which is the abode of Kchheerodshayee MahaVishnu (for details see Brahma-Supreme God), towards the eastern side of Dhruva Lok. This planet is known as Baikuntha lok which is divine and it can never be annihilated even at the time of Mahapralaya. Lord Vishnu dwells here with Maha Lakshmi and His divine associates. All living beings in Baikunth are divine and the lok itself is divine.
Suggested Reading