Whatever we do in our life is known as action or karma(कर्म). Different faculties to used to perform these actions. Hence actions are performed in three different ways, those being -
God only takes note of the thoughts in your mind and disregards your physical activity.  Thus, any physical action cannot deliver a Jeev from Maya. Mind alone is the cause of suffering or liberation.  We do not get any result of actions performed in our dreams or our physical actions.

There is another categorization of karmas

Kriyamaan karma (क्रियमाण कर्म) is every action performed in wakeful state, whether they are mental or physical plus mental, yield fruits. These actions are called kriyamaan karma. In other words, when we choose to perform any action according to our present situation, that is called kriyamaan karma. We get the recompense of our every action of this kind. We undergo consequences of some of them in this life for example eating food fills up our stomach. Kriyamaan karma are like the arrows that are on the bow to be shot. We have the choice of deciding when, at whom and where we shoot them.

Prarabdh karma (प्रारब्ध कर्म) are the actions for which we need to ebar the fruit in the current life time.

Out of all the karma performed in previous lives (sanchit karma) only a handful are selected for which one has to bear the fruits in this lifetime. Those handful of karm are called prarabdh karma. These are also called fate or destiny. Thus, in a lifetime, we receive fruits of deeds performed in many of our previous lifetimes. In other words destiny is not determined by just one previous life or present life only. These are arrows that have already been shot.
There are five things that are already decided for us according to our destiny. They are;
Apart from these 5 predetermined things, every human being is independent to perform any action according to his own free will.
आयुः कर्म च वित्तं च विद्या निधनमेव च। पंचैत्यान्यपि सृज्यन्ते गर्भस्थस्यैव देहिनः ॥
हितोपदेश
Āyuḥ karma ca vittaṁ ca vidyā nidhanmēva ca. Pan̄caityān'yapi sr̥jyantē garbhasthasyaiva dēhinaḥ.
Hitōpadēśa
Even though some things are destined, one should always strive to do the very best in life, as we do not know what our destiny holds for us. Anything that we receive or lose without any desire or effort on our part should be considered as predestined. People who are lazy often do nothing to progress in life and blame their destiny. Having known this philosophy, one should never blame or get upset on any loss or failure, since it is caused by our own past or present actions. Hence, we should only perform good actions for our own bright future. We do not remember all our good and bad actions performed in uncountable lives. However, if we ponder deeply, we will realize that most of the things are quite satisfactory in our life most of the time. We may encounter some hardships sometimes, yet we blame God and others for them instead of being thankful to God for the rest of the good things.

Altogether there are four kinds of Karmas.

Karmakand (कर्मकान्ड) specifies performance of those actions, which are written in the Vedas according to the classification of four castes. There is no trace of devotion (Bhakti) in this kind of action.

Various kind of righteous actions (Karma) are written in the Vedas based on the caste system. The Vedas divide all human beings into four varna (castes) depending on their innate skills. Those classes are:

a. Brahmins (ब्राह्मण ): who can read and teach Vedas,
b. Kchhatriyas (क्षत्रीय): who are physically strong with the quality of a warrior,
c. Viashyas (वैश्य): expert in farming and business and
d. Shudras (शूद्र): people who have no specific qualifications. They were deputed to serve and help the other three. Righteous actions and rituals are properly specified for the people of each caste in the Vedas.

Absolute implementation of the commands of the Vedas in this respect is called karma or Karma kand. Karma kand also includes four kinds of actions.

a. Nitya karma (नित्य कर्म) mandatory for basic everyday living example: eating, hygiene etc
b. Neimittik karma (नैमित्तिक कर्म): Causal actions, which are performed for some special purposes, for example, fire sacrifices to get rid of any sin, or for the purification of the house environment etc.
c. Kamya karma (काम्य कर्म): are those actions which are performed to fulfill a desire. For instance, performing yagya or fire sacrifice to bring auspiciousness to a new born son, or to have good crops and so on.
d. Prayashchit karma (प्रायश्चित कर्म):  the action of atonement. Performance of a particular ritual to rectify any error in performing the above three ritualistic observances is known as prayashchit karma or the ritual of atonement.

If a person performs all these types of Karma exactly as described in the Vedas, without any mistakes, he may possibly achieve life in celestial abodes or heavens to enjoy the fruits of his good deeds. Once fruits of good deeds, allocated for that life are borne, he is bound to come back in the same cycle of birth and death. Hence, this type of action is not acceptable to a wise person.

Karma Yog (कर्मयोग) means constant remembrance of God while performing the righteous deeds depicted in the Vedas. In this category of karma total emphasis is given to devotion, yet a karma yogi performs actions in the world as long as long as they are not a hindrance in his devotion. They see God as the reward of their actions, since they remember God only. It is an adorable kind of action.

Karma Sanyas (कर्मसन्यास) is a kind of action in which one remembers only God, regardless of the commands of the Vedas. Thus he also gets liberation from Maya and receives Divine Bliss. This kind of action is also regarded as admirable. 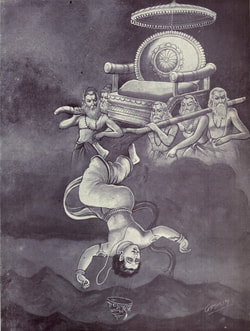 Once fruits of virtues are borne, one falls from the celestial abodes into lower life forms on earth
Vikarma (विकर्म) is reprehensible, as having no belief in the words of Vedas, or having no faith in God. The performer of this kind of action is called Vikarmi and goes to hell (see narak).

What are the good Karmas?

Karma Yog and Karma Sanyas are both praiseworthy. They cut the bondage of karma asunder and enable us to attain permanent peace and happiness. On the other hand, both Karmakand and Vikarma are considered deplorable for they increase the actions for which one has to bear consequences.

Amongst all, Karma Yog is regarded as most noteworthy for the house-holders. It specifies performing all your material duties while keeping the mind engrossed in the Divine thoughts. Thereafter, even if your mind is absolutely absorbed in the Divine and you become totally oblivious of the external things, including the presence of your own body, you need not worry as God Himself assumes responsibilities of all your duties.

As Shri Krishna said in Gita (9.22)
अन्याश्चिन्तयन्तो मां, ये जनाः पर्युपासते। तेषां नित्याभियुक्तानां, योगक्षेमं व हाम्यहम्॥ गीता ९.२२
An'yāścintayantō māṁ, yē janāḥ paryupāsatē. Tēṣāṁ nityābhiyuktānāṁ, yōgakṣēmaṁ va hāmyaham. Gītā 9.22
Any karma, outwardly spiritual or material, cannot provide any spiritual result, without having sincere attachment to God. God notices only the disposition of the mind. One can worship God all the time, but if the mind is wandering in the area of the world, the worshiper will not attain any benefit of his worship. On the other hand, if someone is always occupied in household chores or business, yet his mind is constantly thinking of God, he will attain full benefit of his devotion.

Actually devotion means love, and love is not the subject of senses at all. Total and complete attachment to God is devotion or surrender or bhakti. Any deed that is bereft of wholehearted devotion is a mere physical exercise and gives no spiritual benefit of peace, happiness, and divine grace. Rather it makes one egoistic as it creates a false sense of pride and one may think of oneself as a great devotee. Having ego is the main obstacle in ones devotion. 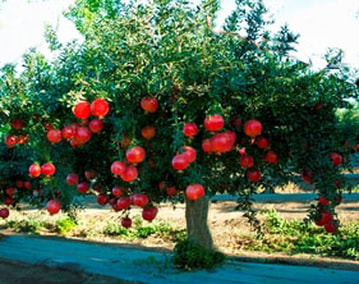 A tree laden with fruits, bends under its own weight, even when pelted with stones, it drops fruits.
One cannot even start devotion without "being more humble than a blade of grass, more forbearing than a tree and being respectful to others, while having no desire of self respect". Grass when trampled on bends and then again stands up. Similarly devotee needs to be humble yet stay steadfast on the path of bhakti; no matter how many people oppose him. A fruit laden tree bends downwards. When a person pelts stones on the tree , the tree drops the fruit.

Our physical devotional activities positively help in practicing devotion. But one should not be confined to the physical actions only. Our mind has to be involved as well; otherwise it will wander off elsewhere in the material world. Therefore, it is best to engage both the mind and the senses in devotion. Only then an aspirant can get the best results of his devotion.