This philosophy is depicted in the Vedas and Tantras as well, Yet, the greatest expounder of Yoga-philosophy is Maharshi Patanjali.  He revealed a scripture on Yoga “Patanjali Yoga Shastra”, in which he described the 8-fold spiritual practices to get control on mind. That is called “ASHTANG – YOGA”. There are 8 limbs, which gradually help to get hold on that mind, which is perpetually moving towards the world in the hope of attaining happiness. These 8 limbs are mentioned below -

1. Yama (यम) – This is the beginning of Yoga. Principles of Yama are meant to slow down the speed of mind which is aimlessly wandering around in the world. The Yamas are twelve; 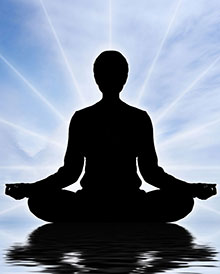 3. Aasan (आसन ) – some exercises to keep body healthy in order to increase ability of mind to meditate for longer hours.

4. Pratyahaar (प्रत्याहार ) – practice of withdrawing the senses from material matters to help the mind to meditate.

8. Samadhi (समाधि) – Deep meditation, wherein the practitioner gets totally engrossed in divine thoughts being oblivious to the external world or even their own physical presence.

There are two kinds of Samadhi of a yogi: The ultimate goal of aspirants of Yoga is not to become one with God to attain salvation. They worship Maha Vishnu and attain the divine bliss and divine abode Baikunth of Maha Vishnu.
Aspirants following the path of yoga meditate in 2 different ways:

Yogis of sagarbh and nigarbha both are of 3 kinds. Thus altogether there are six types of yogis.
Sagarbh or nirgarbh Dhyan culminates into Sagarbh or nirgarbh prapta – siddhi – These are those who realize God and have become eternally free from Maya.

In modern age, there are several misconceptions about yoga. Some of those misconceptions are: Yoga is
The authentic practice of Yoga starts from the Yama and Niyam. A precursor to stepping on the path of yoga is to control the mind and senses. This is a spiritual science to attain a spiritual result which is to become free from Maya and realize the Brahma - Supreme God. It is not confined to the Asana (postures) only.

The first five steps are meant to prepare the body and mind for the practice of yoga, which comprises of control on mind and senses to detach mind from the allurements of this mundane world. Last three i.e. Dhyan. Dharana, Samadhi are purely related to the practice of realization of God.

There is no point of practicing yoga without following all the eight steps of Yog-Shastra. Several people go all out in their practice of yoga but to no avail due  to lack of proper knowledge of this spiritual science. All this is due to the lack of proper teacher of Yoga.
Suggested Reading