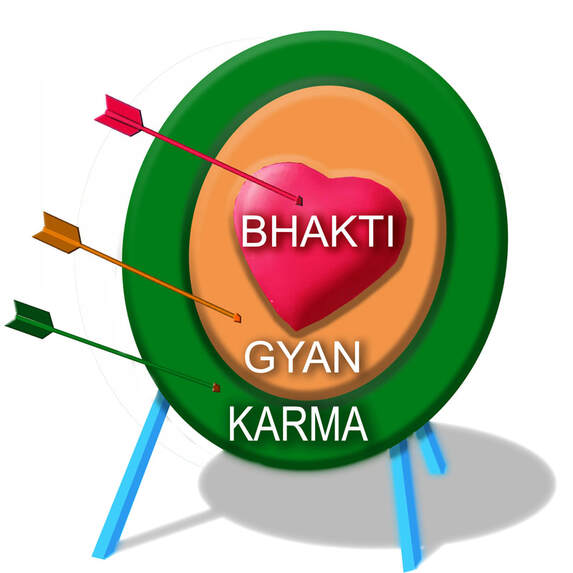 Each of us can relate to our desire of being “happy forever”.  In fact, all jeev want to be happy and have been searching for happiness forever, yet even after expending numerous efforts over uncountable lifetimes, they have not achieved that happiness and their search continues. Possibly a thought may cross their mind that since happiness has not been attained through the attainment of material wealth, perhaps there may be another path to attain that happiness. Jagadguruttam Shri Kripalu Ji Maharaj says, our scriptures show us the path for attaining that happiness.

The first criteria for evaluating whether our chosen path is right or not is called anvaya. The word  anvaya means that “the goal should be achievable through this path”.

​First, let us evaluate the path of karma.

​If one observes to perfection, each of the prohibitively strict rules of karmakand prescribed by the Vedas, then one will earn temporary residence in heaven (swarg). After enjoying the luxuries of swarg for a finite duration, the jeev is again sent back into the lower forms of life. 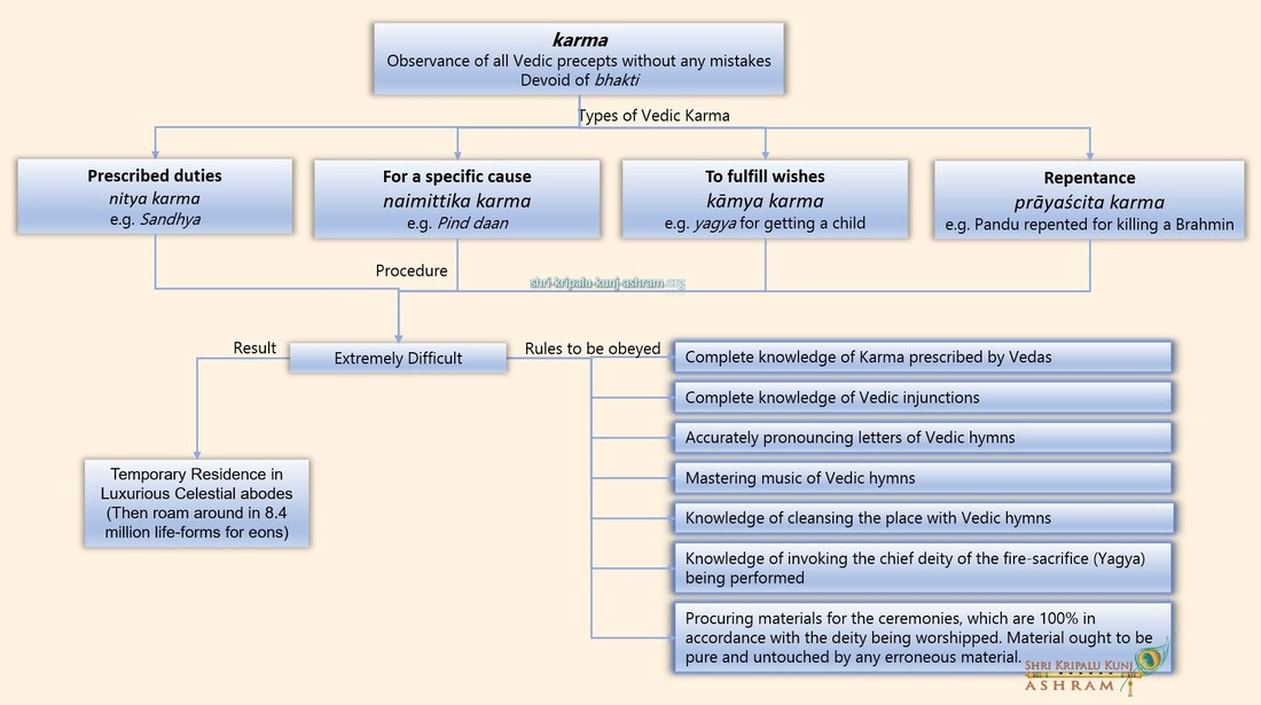 ​Veda says -
“Those who follow the path of karma are extremely foolish, for after toiling so hard they attain luxuries for a brief period, thereafter the jeev might be banished into the lower life forms”. ​ 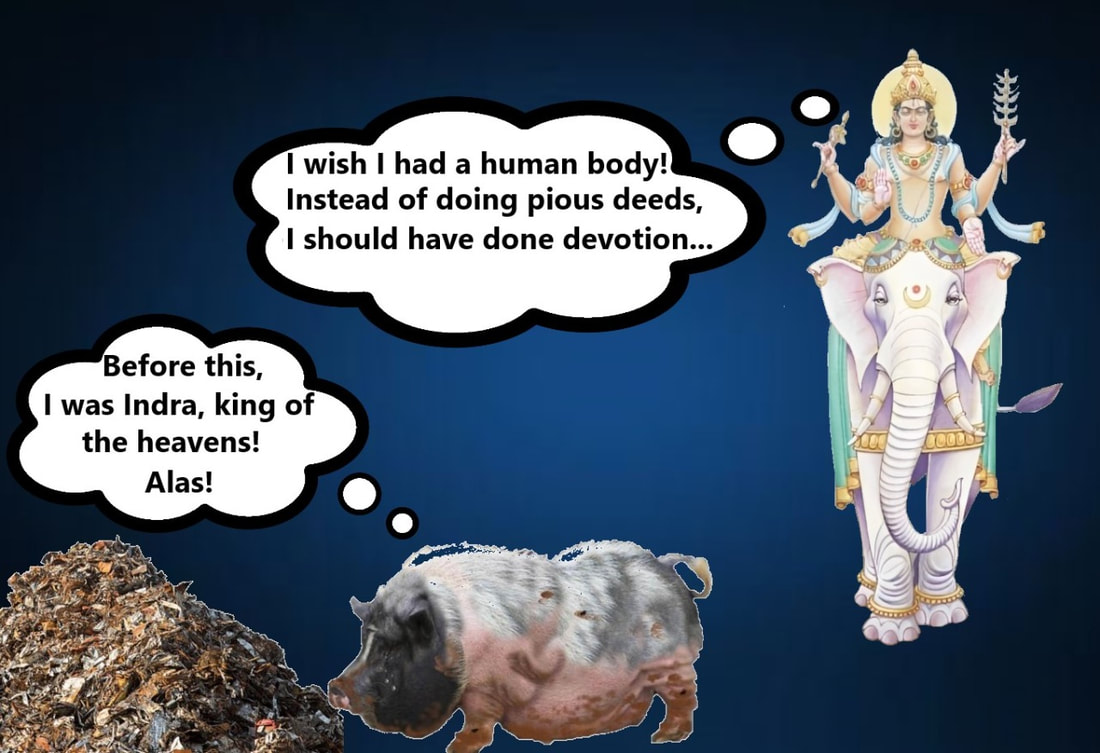 "Whether one follows the path of gyan ​or any other path, he will have to worship Me”. Because -
““Only through bhakti, can one gain complete knowledge of My infinite glory and only then will one attain mukti". So the path of gyan also does not live up to this criterion.

All Vedic scriptures proclaim that God can be attained ONLY through the path of devotion or bhakti.

​Shri Krishna revealed this secret to Arjuna in the Gita. 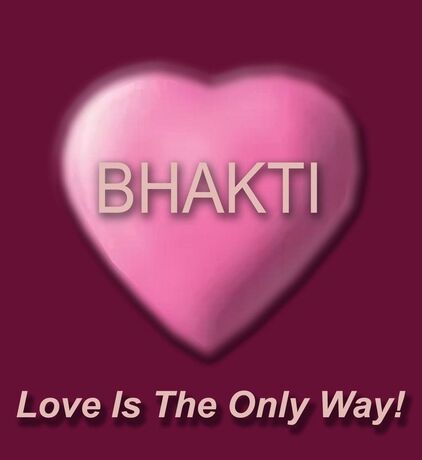 “Only by devotion can I be known or seen. One can be absorbed in Me only by bhakti.”

Shri Krishna did not say one can see Me, know Me by gyan or by karma !

​Therefore, out of the three paths, only the path of bhakti meets the criterion of anvaya.

Bhakti alone can unite the jeev with Brahma-Supreme God.
Top
If you enjoyed this one, you might also like 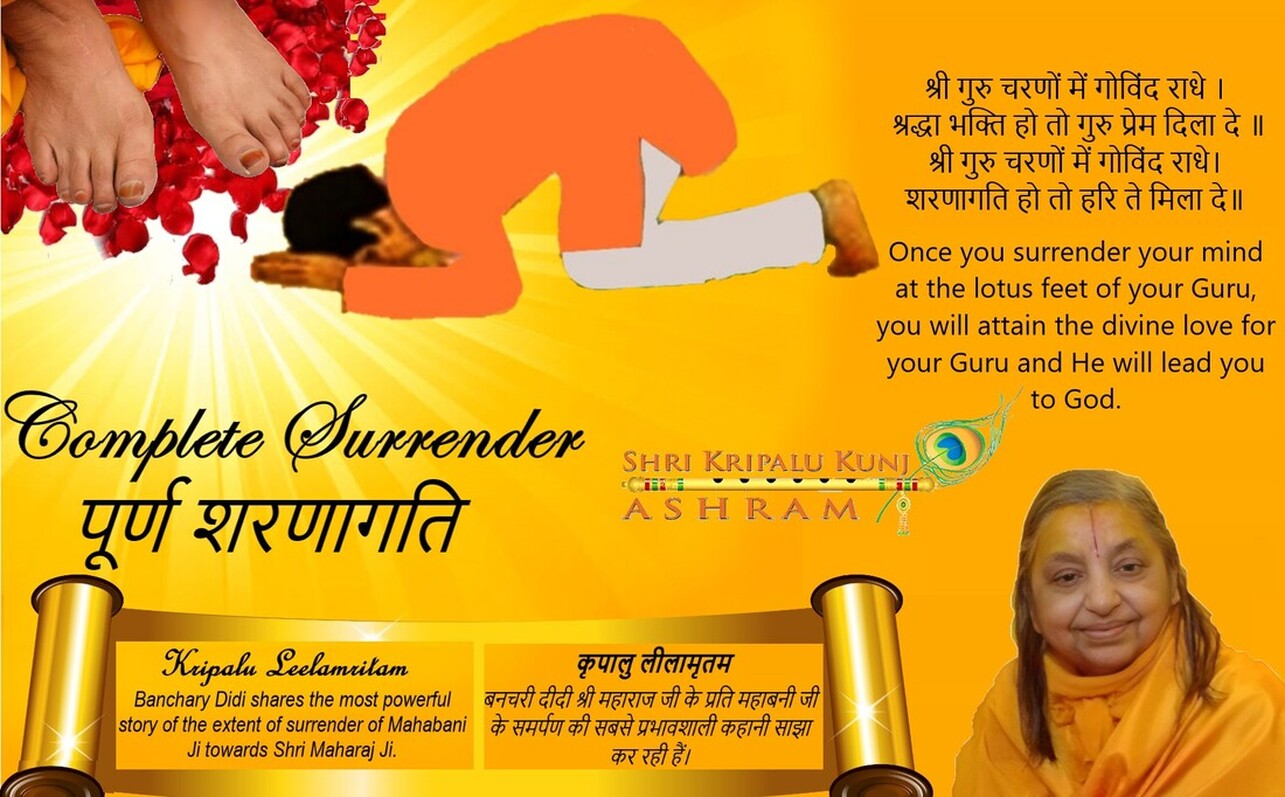 How Deep Should My Level Of Surrender be?

As the saying goes “the more flexible the branch is, the more it can be flexed”. Mahabani ji was such a devotee. He completely surrendered to Shri Maharaj Ji. Such was his level of surrender that throughout his life he did not save a single penny as security for his old age or his family. For 14 years, Shri Maharaj ji stayed with Mahabani Ji in his residence like a respected member of the family .

The king of Pratapgarh was a friend of Mahabani Ji. All through his life, Mahabani Ji lived on rent in a bungalow owned by the king. The bungalow had a sprawling lawn and was called Peeli Kothi (Yellow Bungalow). Keertan was held in Peeli Kothi three times a day - in the morning, evening and night. The devotees were served meals prior to each keertan session, after which they comfortably enjoyed the keertan. Mahabani Ji was a food Inspector by profession. He used to spend his entire income in the service of the devotees. And when needed, he used to withdraw money from his retirement fund as well in the service of the devotees.

His colleagues used to make fun of him by passing side comments such as “Mahabani Ji has lost his mind. He has been brain-washed by Shri Maharaj Ji. He withdraws money from his retirement fund on the pretext of his daughter's wedding, but till date we have yet to receive an invitation for any of his daughter’s wedding” and so on. But Mahabani Ji was firm in his resolve. Till the very end, he remained completely devoted to the service of Shri Maharaj Ji and his
devotees.

When Shri Maharaj Ji learnt of his passing away in 1959, He said “today Pratapgarh has become a widow”. (a phrase that means "has lost all of its charm"). After his passing away Mahabani Ji’s family had no means of livelihood. All four of his daughters were unmarried and did not have a job to earn a livelihood. The son also did not have a job and there was not a penny in his retirement fund. Seeing this situation, Raja Saheb agreed to sell the Kothi to the Mahabani family for ₹ 5000, but the Mahabani family did not even have ₹ 5000. So, the whole family had to move to Lucknow with Mahabani ji's younger brother.

In due course Mahabani Ji's son got a job. When Shri Maharaj ji came to know that Mahabani Ji's son got a job, He breathed a sigh of relief. Shri Maharaj ji's words were, "Today I have taken a bath in the holy Ganges river” (a phrase which means - I have fulfilled my responsibility). The entire family of Mahabani ji was taken care of by Shri Maharaj ji. For the rest of her life Mahabani ji's wife lived in Guru Dham, Mangarh. One of his daughters became a lecturer in degree college, college, two of his daughters (Nagari Didi, Banchary Didi)were given a lifetime opportunity to serve Shri Maharaj Ji as His preachers and the fourth daughter spent her life as a saint in Braj. 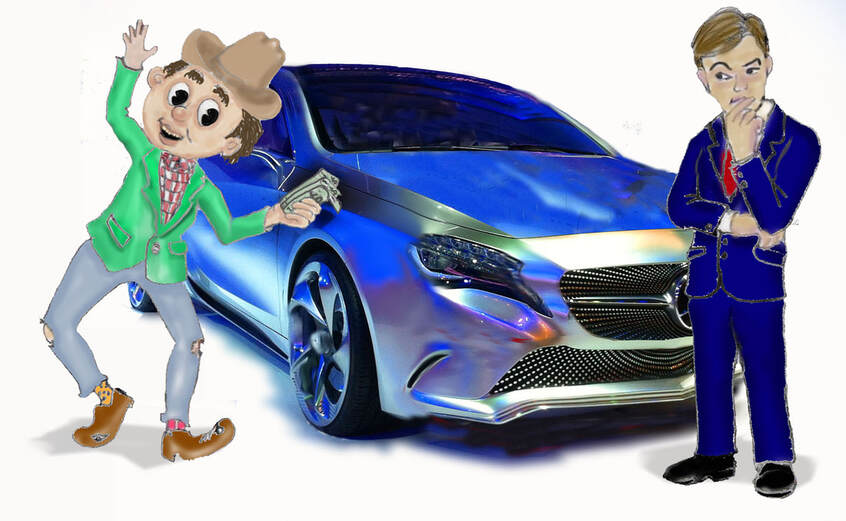 The higher you value worldly responsibilities and achievements proportionately less will be the value of God and Godly things. So even if you believe  that you are 100% surrendered, God will not bear complete yogakshem (take care of everything you have and give you what you don’t have).

People ask what is surrender? I have written several articles on this website on the topic How do I Surrender,  Why yield to a saint, not directly to God?, ​How does Guru help us in spiritual growth?. Since sometimes an example is needed to understand the concepts. So, giving you a very real and recent example of surrender to Guru.

Perhaps from this true story, you would have gotten a practical glimpse of “what complete refuge under the lotus feet of God and Guru looks like ''. Lord will bear your yogakshem, or in other words, the burden of your responsibilities such as providing for food, shelter, clothing and children's education to the extent of your surrender. The more you surrender to Him, the more God Himself will carry your burden. Finally, when you make God your only goal and use all your resources to attain that goal, then God will bear your yogakshem fully. You will never need to ask; He is so gracious that He does it without our even having to ask.

Until and unless you surrender everything, and  everything means 1. everything that belongs to you and 2. also you yourself, then God and Guru will not bear your complete yogakshem. This is God's irrefutable law. Whether you accept it today or not, and choose to take infinite births and go round in 84 lakh life forms, is in your hands. God has given freedom to every living being to determine his own goal.

Maybe, as of this moment you are not as surrendered as Mahabani Ji’s and don’t even see the path of being able to reach there. Maybe, to maintain a peaceful situation you have to make compromises with others in your life. But, if you long for reaching this level of surrender, here is an option that Shri Maharaj Ji (2) has offered us. Start with Sadhana - Daily Devotion (3). Do it daily and earnestly, by Guru’s grace you will start progressing on the path. Gradually but surely, devotion will reduce your miseries and create an environment conducive to doing bhakti. When a dangerous  dacoit like Ratnakar (4) can attain God in the same birth then why won't you? Just resolve once to do it and follow it through. God is waiting with outstretched arms to bear your yogakshem.

There is a saying that “a hint is enough for the wise”.
Top
If you enjoyed this one, you might also like 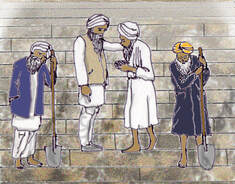 Guru Amar Das Ji, the third Guru of Sikhs purchased some land in Goindwal and laid the foundation of a Bawli (a well with descending steps) in the year 1559. All Sikhs joined in the work of digging the Bawli. There was tremendous activity throughout the duration of the construction of the Bawli. After digging very deep, they found bed rocks which hindered the excavation progress.. The underwater reserve was just below those stones.

The Guru asked the Sikhs if there was any one who would be courageous enough to drive a peg into the base to remove the obstruction. He, however, warned that the operation had great danger because if the person could not avert the gush of water, he might drown. All Sikhs remained silent and no one came forward to take such a risk. At last, Manak Chand of Vairowal, who was married to a niece of Guru Ji, offered his services.

Manak Chand, invoking God's name and through the grace of the Guru, was able to wedge through the stone and the stream of water immediately overflowed the Bawli. He was overtaken by the gush of water and drowned. However, by the grace of the Guru, his body came to the top of the water from where he was taken out by Sikhs. He was then brought back to life by Guru Amar Das Ji with the grace of God. Therefore, he was called Marjiwra'(revived after death).
​
The Bawli, when finished, yielded fresh drinking water. The Sikhs rejoiced at the successful completion of their labor. But the one who rejoiced the most was Marjiwra who found eternal bliss by following his Guru’s orders.

Also, since God serves the Guru and makes his every word come true. So Guru always helps his surrendered soul at all times in all situations. There is no limit to what he can do.  So, don't be scared of following his instructions.
Top