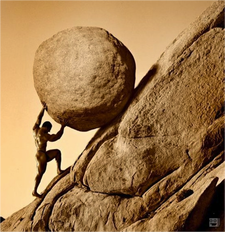 Seemingly impossible six states of mind are prerequisites for stepping on the path of Gyan
An unwavering realization of reality is called gyan or true knowledge. Thus, firm knowledge of God is Gyan. Knowledge of God is comprised of the knowledge of eternal and temporary matters, which results in detachment from the entire realm of Maya i.e. from this world up to the abode of Brahma (creator).

The path of knowledge for attaining God is called gyan marg. Before learning "a b c" on the path of knowledge one has to master the following four traits. One who has mastered these states is called Sadhan-chatushtaya-sampann  (साधन चतुष्टय सम्पन्न​)
Once these mental states have been mastered then the person has to practice practice Vairagya which means neither affinity nor malice anywhere in the world. Then he crosses other levels of Gyan namely:
In fact all these levels are the progression of detachment. Eventually the aspirant conquers one aspect of Maya. There are two aspects are
Swaroopavarika Maya is that part of ignorance which hides our own self from us. We are souls, immortal and divine, yet, we do not know this reality just because of swaroopavarika Maya. The gyani crosses this part of Maya and becomes free from the two modes of Maya. Yet, the third mode sattva guna still remains and the jeev attains the knowledge of self (atma or soul).

The knowledge of atma is so blissful that the aspirant mistakenly feels that he has actually attained the bliss of God-realization. This state of a gyani is called brahmbhoot avastha (ब्रह्मभूतावस्था), the level where he knows or feels nothing except the bliss of knowledge of soul. The Gita says for such a gyani:
﻿ब्रह्मभूतः प्रसन्नात्मा न शोचति न कांक्षति। समः सर्वेषुभूतेषु मद्भक्तिं लभते पराम् ॥ गीता १८.५४
Brahmabhūtaḥ prasannātmā na śōcati na kāṅkṣati. Samaḥ sarvēṣubhūtēṣu madbhaktiṁ labhatē parām. Gītā 18.54
"A gyani at this stage is ever cheerful. Neither he feels sad nor does he desire anything". He feels Atma in everyone and everywhere. Hence he becomes totally impartial.

Ultimately, he has to practice devotion to realize God. God cannot be realized by any means other than devotion.

The path of knowledge is more difficult as compared to the path of devotion. Since there is nothing to help in meditation like name, form, pastimes and attributes of God, it becomes difficult to focus on God.
But if someone prepares himself to choose this path and  bravely faces all the hardships, still he may have to face other difficulties on the path of Gyan such as,

कहहु भगति पथ कवन प्रयासा। जोग न जप तप मख उपवासा॥ रा.च.मानस
kahahu bhagati patha kavana prayāsā. Jōga na japa tapa makha upavāsā. Rā.Ca.Mānasa
3.       If someone successfully meets the prerequisites to follow the path of knowledge, there is always a possibility of downfall at every step because the gyani relies on his own knowledge and detachments, and does not take the support of God. On the other hand, a devotee walks on the path depending completely on the grace of God and with total reliance of God. The Bhagavat says the same in the following verse:
येऽन्येरविन्दाक्ष विमुक्तमानिनस्त्वय्यस्तभावादविशुद्ध बुद्धयः ।
Yē̕n'yēravindākṣa Vimuktamāninastvayyastabhāvādaviśud'dha bud'dhayaḥ.

Yes, the greatest difference actually begins now. Because a gyani, who does not believe in any form of God and wishes to have liberation from material agonies only, he gets freedom from Maya and cycle of birth and death forever. His soul, which is not material, merges into Supreme Being forever after leaving this body. Thus he becomes one with God, who is the ocean of bliss. Then how can he ever enjoy that bliss? If you yourself become a sweet, then how would you enjoy the taste of that sweet?


All of them only had the subject of one sense, and experienced such an extraordinary divine bliss that they forgot about their transcendental meditation. Such is the bliss of the personal form of God.

A gyani, who worships the abstract form of God and attains liberation, cannot attain the bliss of love, because there is no form or name or pastimes to love.
Suggested Reading