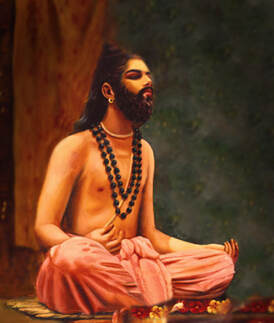 The first step for the Gyanis is to be Sadhan-Chatushtaya
Question:

Answer
Those who follow the path of Gyan (knowledge) are called gyanis. Before God realization a gyani is able to reach an intermediate state where he can realize the atma or the soul (or self). It is also a universally accepted fact that the atma is divine and is not comprehensible by a material mind or intellect. In this intermediate state, a gyani is still under the control of Maya and possesses a material mind. Then how does a gyani attain the realization himself to be the soul?

Our Vedic Hindu scriptures say that "I" is an epithet for the soul.
The soul is divine, eternal and cannot be destroyed. It is an inseparable part of the Brahm - Supreme God, who is an infinite ocean of Bliss. We have also heard that "the body is mine." According to Grammar (and also logic) whatsoever is "mine" cannot be "me" e.g. we say my house, my car, my wife etc; that means house, car, wife etc are different from me. Yet, we don't differentiate between me and mine when it comes to soul and body. However, we are inclined to believe that “I am the body."

The root cause of this ignorance is Maya. If one overcomes Maya, this ignorance will cease to exist. That is why gyanis aim to attain freedom from the clutches of Maya.

To overcome Maya, the first step for the gyani is to be Sadhan-Chatushtaya (साधनचतुष्टय), i.e. master the following four concepts:


After accomplishing these four concepts the gyani continuously chants the Vedic mantra:
तत्त्वम्असि
tat tvam asi
"You are Him."

With constant contemplation of this mantra over a span of many lifetimes, a gyani’s mind develops this deep-rooted faith, that there is no difference between the soul (referred to as “You” in the shloka above) and God (referred to as “Him”).

But this mantra differentiates between “Him” (God) and “You” (soul). So somewhere in his mind, he is not truly convinced of the unity between “Him” and “You”. So, to remove this differentiation as well, gyani starts practicing:
अहंब्रह्मास्मि
ahaṃ Brahmaāsmi
"I am Brahm" or in other words I (the soul) is non-different from the Supreme God.

According to the gyanis the belief that "I am a part of the Supreme God" is an illusion. They believe that there is only one entity called Brahm. They say:
एको ब्रह्म द्वितीयो नास्ति
eko brahma dvitīyo nāsti
"All that exists is Brahm. There is no entity other than Brahm.'' According to them, Jeev, or Maya are non-existent. Through constant practice of many lifetimes the gyani is convinced of non-duality.

After mastering this concept, he reaches the stage of Samadhi, in which his meditation becomes so deep that he forgets about the self. Hence instead of saying “Aham Brahmaasmi” he just feels Brahm, Brahm, Brahm.

Thus, he forgets about:
The triputi (त्रिपुटी) three aspects of Gyata, Gyan, Gyey (ज्ञाता, ज्ञान, ज्ञेय) merge into the self. This is called Niranjan Gyan. It is a very high stage of Gyan, where the aspirant conquers Rajas and Tamas guna of Maya. These two parts of Maya are together called Swaroopavarika Maya.
Because,
सत्वाद् संजायते ज्ञानम्
satvād saṃjāyate jñānam
“Knowledge rises from the sattva mode”; So far, due to lack of knowledge, he considered the body to be the real “I”;. But, after the emergence of knowledge, the clouds of ignorance get dissolved and the individual realizes himself to be the atma. Hence, Atma-Gyan means realization of the self.

​So, it has been clarified that the material intellect does not realize atma. Since the mind and intellect (aka Gyata) cease to exist, it gives rise to the realization of atma.  ​

Also, no one can overcome Maya on their own. As Shri Krishna says in Gita -
दैवी ह्येषा गुणमयी मम माया दुरत्यया ॥
daivī hyeṣā guṇamayī mama māyā duratyayā, māmeva ye prapadyante māyāmetāṁ taranti te
“This Maya, which is Mine, consists of the three gunas and no-one can overcome it on their own. Only those, who are fully surrendered to Me are able to cross this ocean of Maya, by My grace.”