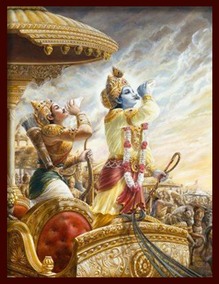 “Arjun! I don’t need to accomplish or earn anything in all the Treilokya. Yet, I perform my duties just to set forth an example karmayog. People follow the sovereign ones. If I don't do so then the lesser personalities will follow My footsteps and become reluctant towards their duties. And I will be accused of leading people astray.”

Arjun was born in a kshatriya family. As per the Vedas duty of Kshatriya is to protect the righteous. Arjun had cast away the weapons and was sitting like a coward for he feared the atrocities of Narak as a consequence of killing so many people. Shri Krishna tried to steer Arjun away from his inhibitions and fears, by further adding, ”You will be the most recognized person in history. You will be the ideal of how a kshatriya (क्षत्रिय​) warrior ought to behave.”

​The material beings adapt this line in their own context to imply “each and everyone of us ought to perform our duties to set an example to others”. Is that the right interpretation of what Shri Krishna said to Arjun? Let us examine what it takes to set examples for other to follow...
Is setting up ideals really our job?
Please reflect on this point: People who set examples
We are ignorant beings, therefore our actions are full of ignorance. We work for fulfilling our own selfish interest. All day long the mental state changes our actions also keep changing. ​Then how can we set an ideal?

​Those who set examples for others to follow
ब्रह्मविद् श्रुतिमूर्ध्नि
brahmavid śrutimūrdhni
“they are authorized to place their foot on the head of the Vedas, since they have already attained the ultimate aim of life”.
Though God and God realized saints don't need to follow rules written in Vedas yet God and some God realized saints are seen following the Varnashram dharm written in Vedas. They do so to practically demonstrate how to lead life while abiding by all Vedic rules. They intentionally set an ideal for the masses to follow. Unlike us, who while performing worldly duties get engrossed in the world, God and saints remain aloof from the world and immersed in the unlimited divine bliss.

While some saints establish these ideals, it is very much possible some others may even choose to abandon these rules. ​As Shri Hit Harivansh, Shri Haridas Ji, Rishabh dev, Meerabai and many such saints remained immersed in divine love bliss. Whereas all the previous four Jagadgurus, Mahaprabhu Chaitanya and our revered Guru Shri Maharaj Ji, were thoroughly engaged in inciting a spiritual awakening of the masses so that they might realize the ultimate aim of life. They also put forth the ideals of how to lead a successful human life.

​So can we also set an example? Material beings cannot set an example since we have not attained the real aim of life. We easily get perturbed in  adversity and forget to pursue our aim of life. But God and the saints are self complacent, they have attained everlasting divine bliss, and they are Omniscient. They have a power of Yogmaya, which is –
कर्तुमकर्तुमन्यथाकर्तुं समर्था
kartumakartumanyathākartuṃ samarthā
“Able to do everything, able to do nothing and even capable of doing opposite”.
So only they can act to effectuate an ideal. Sadly, we cannot even imitate them fully, so we must follow those instructions of the saints which is relevant for our spiritual level. As the Bhagwat says -
ईश्वराणां वचः सत्यं तथैवाचरितं क्वचित् । भा. १०.१३.३२
īśvarāṇāṃ vacaḥ satyaṃ tathaivācaritaṃ kvacit ।  bha. 10.13.32
तेषां यत् स्ववचोयुक्तं बुद्धिमांस्तत् समाचरेत् ॥
teṣāṃ yat svavacoyuktaṃ buddhimāṃstat samācaret ॥ 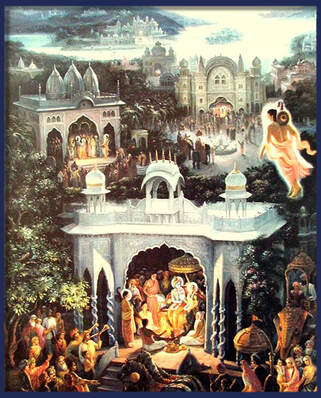 Narad Ji paid a visit to Shri Krishna in Dwarika
"The words and actions of divine personalities are always divine and pure hence adorable. However, one is expected to imitate only those actions, which are applicable to our spiritual level". There are separate guidelines for the seekers versus those who have attained perfection.

Shri Krishna had married 16,108 wives. The Devarshi Narad once wondered, how can He satisfy all His wives? Hence, one day Narad Ji paid a visit to Dwarika to check on him. Lo and behold! Narad Ji witnessed that He was simultaneously present with every queen in her room. Every wife was totally content. Again, each wife of Shri Krishna had 10 progeny. Later, all of those 161,080 sons fought and killed each other. Yet in all situations, Shri Krishna was unmoved and equipoised.

Imagine: can any human being marry that many women, please all those women and yet remain unattached to all of them? Shri Krishna was so unattached that when all sons killed each other then also He was unperturbed. Our heart starts palpitating on job loss, death of loved one and myriads of things.
Lord Shiva drank halahal. Lord Shiva drank halahal. It was such potent poison that due to its fumes the devatas and demons started losing their consciousness. Lord Shiva held that poison in his throat. That is why his throat is blue and He is called Neelkanth (one with a blue throat). If an ordinary man were to drink 50 grams of iodine the consequences will be dire. Can you even fathom how He could drink that poison, hold it in his throat and yet stay live!

God and His swansh have the power of "doing opposite". So they can do whatever they like but we cannot. Hence, we should not even attempt to imitate them blindly.

The two above mentioned examples pertain to God and His swansh. Now let us consider another example where a saint from jeev class has set an example worth following:

Prahlad realized God at an early age(3). Then God ordered him to reign on the entire earth. His only son Virochan was the crown prince. When Virochan and his Guru’s son were young boys, it so happened that both of them fell in love with the same girl. They both decided that the one who is superior will marry the girl and the other one will be sentenced to death. Guru's son said, ”My father has said that Prahlad cannot be unjust, hence he should adjudicate this matter”. Virochan intervened, saying,”Prahlad is my father. If he rules in my favor then you will claim that he is biased”. At this Guru’s son said, ”My father, has said that Prahlad cannot be biased. Hence, he is the only one who should adjudicate this matter”. They both approached Prahlad and asked him to give his judgment. Prahlad said,”my Guru is superior than I hence my Guru's son is superior to my son”. Consequently, he ordered Virochan to be hanged until death. 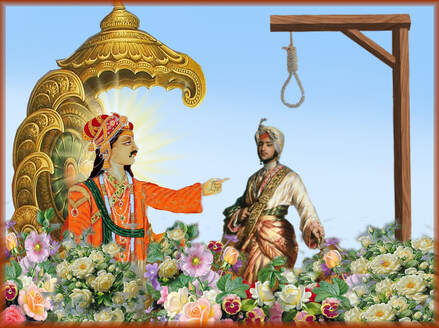 Bhakt Prahlad ordered his only son Virochan to be hanged till death
As the guards were about to hang Virochan, Guru's son stopped the guards and asked again "Prahlad! Who is superior? You or I?" Prahlad bowed down and said "you are superior since you are the son of my Guru". Guru's son said "then you will have to obey my orders". Prahlad agreed "yes I shall. If you wish I will order myself to be hung along with my son". Guru's son ordered, “Prahlad! Let Virochan go". ​Prahlad ordered his son to be freed.

Prahlad did not flinch even the slightest bit while ordering his son to be hung or let go. His voice did not quiver, his legs didn’t shake, his heart didn't miss a beat. He was completely tranquil.

Devatas (celestial gods who live in swarg) witnessed this and showered flowers on Prahlad because they could not have been so impartial, just, equipoised and humble.

Prahlad demonstrated the characteristics of a good ruler. Such a behavior is not possible before realizing God. After God realization all physical bonds are severed and material attractions are eradicated. Not only that since Maya has lost its grip on the jeev (1), no new bonds or attractions can be formed. Only after attaining this blessed state can someone act in such an impartial and equipoised manner.

Setting an example is a very tall order. So, setting up an example, for masses to follow, cannot be a task for material beings. Just like, first a person learns to swim then gains strength and expertise. Eventually, he passes some tests and becomes a certified lifeguard. Now he's capable and entitled to be a lifeguard and thus save others. To begin with, he was incapable of saving even himself. Without the training and expertise if he tried to save somebody he would have drowned along with the person who he was trying to save.

​Thus, we ought not expend our precious time in human life (2) in doing actions to set ideals for others to follow. A better use of our time would be to follow the teachings of our Guru to attain the wisdom and knowledge which is needed to reach the point where we can become capable of setting examples of ideal living for others.
If you enjoyed this one, you might also like
Does Selfless Love Mean Always Being Unhappy?

Indulge yourself in spiritual material