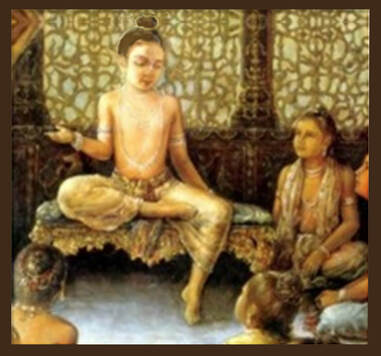 Prahlad preaching to his fellow classmates
The Festival of Holi reminds us of Prahlad, the crest jewel of all saints (Bhakt Shiromani), and his steadfast devotion towards the Supreme Lord Shri Krishna.

One day creator Lord Brahma's 4 divine son called Kumars went to visit Lord MahaVishnu in His divine abode Baikunth. Upon reaching the gates of Baikunth, they were stopped by Jay and Vijay, the gatekeepers of Baikunth. Infuriated at being stopped from entering Baikunth, the Kumar brothers cursed Jay and Vijay to be born as demons on earth who would fight relentlessly against their dear Lord. Jay and Vijay were born on earth as Hiranyakashipu and Hiranyaksh.

Hiranyaksh was a cruel demon who tortured all who he came in contact with. He was eventually killed by Lord Varah. The death of his brother infuriated Hiranyakashipu and to avenge his death, Hiranyakashipu performed severe penances to please Lord Brahma with the aim of seeking a boon from Him that would make him almost invincible. Upon attaining that boon, Hiranyakashipu became very arrogant and forbade his subjects from worshiping God. He ordered everyone to treat him as God and perform their worship to him. 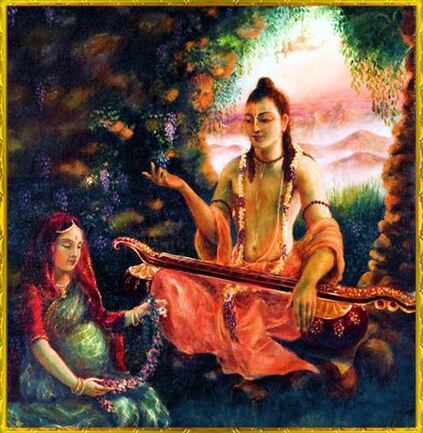 Hiranyakashipu's wife Kayadhu was carrying Prahlad. While Kayadhu dosed Prahlad carefully listened to teachings of Sage Narad
At this Hiranyakashipu pointed towards the stone pillar in his palace and asked Prahald, “Does your God dwell in this pillar too”? “Sure, He does”,  replied Prahlaad. The demon smashed the pillar with his mighty club. The Almighty, Omnipresent Supreme Lord appeared from that pillar in the form of half lion and half man. This form of the Lord is known as Lord Narsingh. He picked up Hiranyakashipu, placed him on His thighs and killed him with His sharp claws, thereby saving Prahlad from his father's wrath.

Before ascending to His Divine abode, Lord Narsingh told Prahlad to ask for a boon, which perplexed little Prahlad, as he had learnt while in his mother’s womb that one should never ask for anything from God.

While Hiranyakashipu was performing penances to please Lord Brahma, Indra, the king of celestial abodes, abducted Hiranyakashipu’s wife Kayadhu. At that time she was pregnant with Prahlad. Sage Narad intervened in the situation, rescued Kayadhu and gave her shelter. While sage Narad preached to Kayadhu, Prahlad carefully listened to the teachings. He learned them well and perfected his devotion before birth. Now, although Prahlad was merely a 5 year old child, yet he was an accomplished devotee of the Supreme Lord.

So Prahlad answered:
अहं त्वकामस्त्वद्भक्तस्त्वं च स्वाम्यनपाश्रयः ।
भा. 7.10.6
ahaṃ tvakāmastvadbhaktastvaṃ ca svāmyanapāśrayaḥ ।
bhā. 7.10.6
“O My Master! What are you saying? It would be out of place for a servant to ask the Master to do things for the servant! Haven’t You accepted me as your servant (daas)? " 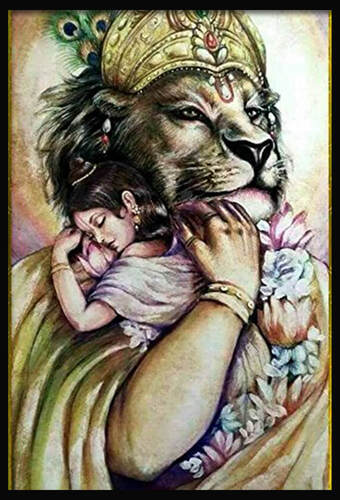 Lord Narsingh picked up Prahlad in His arms. His anger abated and He started dancing in joy.
“In Your pleasure lies my pleasure”.

All desires for self pleasure are the reason for our unhappiness. The state of no-desire is unnatural and thus unattainable. However, the jeev can attain God’s grace by replacing the desire for self-happiness with the desire to please-God. God is self-complacent yet when the jeev desires to please Him, the all-gracious Lord graces that jeev. The Gopis had one and only one desire and that was to please Shri Krishna. Shri Krishna is so gracious that He considers Himself indebted to the Gopis for their exclusive, pure and selfless devotion unto Him.

Hiranyakashipu had a sister Holika who had the boon that fire won’t burn her. So Hiranyakashipu ordered Holika to sit in pyre with Prahlad on her lap. The idea was that Holika would live while Prahlad would die. Hiranyakashipu’s plan was thwarted by God; He saved Prahlad whereas the fire consumed Holika. The auspicious occasion of Holi, is a commemoration of how Prahlad was saved by the Lord's intervention. On this day we must prudently remember the great ideology of Bhakt Prahlad and firmly resolve to selflessly devote every living moment of our life in the loving remembrance of God. And that remembrance is only to please the Lord  and by His grace attain the goal of our lives, which is God realization.

Hence, a devotee must aim only for divine bliss. This bliss is achievable only by selfless devotion like bhakt Prahlad.
Love our Publications!!