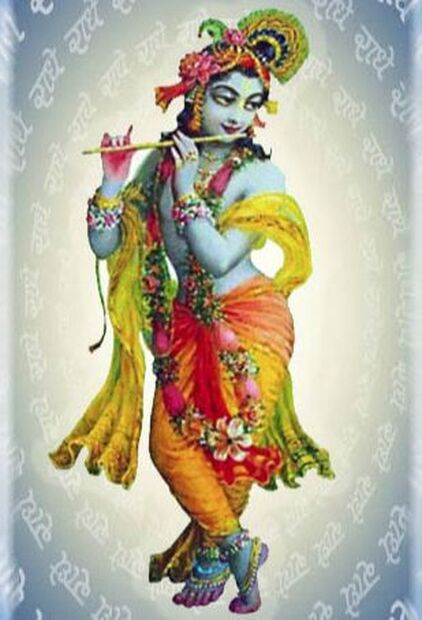 What is special about Shri Krishna’s divine form, that who so ever sees Him get mesmerized?
​​Answer :
“The beauty of the sapphire-complexioned Shyamsundar is incomparable. Those who get even a glimpse of Him, place their hand on their heart and fall unconscious (unable to bear the infinite bliss)”.

On the spiritual journey, an aspirant naturally desires to attain the same bliss as is mentioned in these verses by Jagadguru Shri Kripalu Ji Maharaj. However, maybe only a handful start their journey in this state!

​So, what do average sadhaks (aspirants) need to do to reach this state? Please read the rest of the article as we explain how to get the nectar which is described above.

​Shri Kripalu Ji Maharaj coined the word Roopdhyan which means to lovingly visualize and meditate upon the divine form of Shri Krishna. This is a powerful means to increase the longing to meet Him. However, an aspirant who has never seen the form of Shri Krishna or seen His leelas can be perplexed about how to make His image in their mind. For this, it is important to learn more about Shri Krishna. This knowledge (महात्म ज्ञान) will increase our love and longing for Him (मिलने की व्याकुलता). In order to strengthen our Roopdhyan, in this edition of Divya Ras Bindu, we will dive deep and learn about Shri Krishna’s divine form and His divine qualities. When we repeatedly contemplate on His attributes during Roopdhyan, our eagerness to meet Him will start building multifold and we will start getting closer to our aim of life.

​In order to learn about Shri Krishna’s body, first let us examine the different kinds of form in which jeev can appear (1).
​
​In the entire creation all the material bodies can be one of the 9 material body types. In addition to that there is 1 divine body. Even in the divine bodies, Shri Krishna’s body has attributes that are unique to Him. Below we will describe His body in Shri Maharaj Ji’s words. 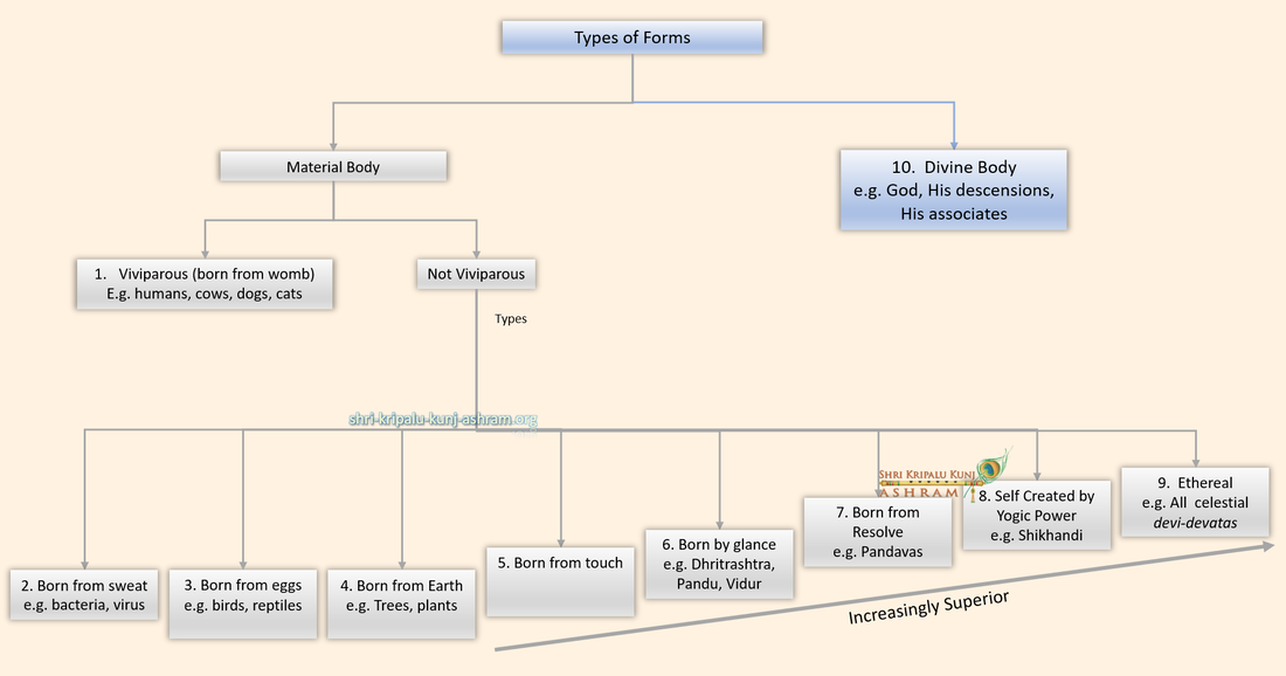 ​So what are the qualities of such a body? Let us read further to know.

The qualities of Shri Krishna’s body

Such a body has several qualities that are not there in any other body. Some of those qualities are mentioned below:

​In material bodies each body part has a different capability
"Each pore of Shri Krishna's body is capable of doing the work of the mind, intellect and all the senses".
"Shri Krishna and His divine body are one and the same". This characteristic called svagata bheda śūnya​ (स्वगत भेद शून्य​) is found ONLY in Shri Krishna.
"There is no body-soul difference between Shri Krishna and His body". In Him, there is no difference of virtue and the virtuous either.
"The name of Shri Krishna is Shri Krishna Himself", just as one name of Shri Krishna is Ajit which means one who cannot be defeated, and he is invincible.
"Shri Krishna's name, form, divine pastimes, divine qualities, abodes and His saints are all Shri Krishna Himself". Yes, He Himself becomes His abode. So if you touch a particle of dust in Golok you will experience the same bliss as you would if you embrace Shri Krishna.
Color of Shri Krishna's Body
Shri Krishna's color is blue. It is not the blue color we see in this Sansaar - The world. What to say of a paramhans, even an ordinary human being cannot let go of their meditative bliss on looking at any blue color in this world. Saints thought for long and hard to figure out how to explain His color to us material beings. Since there is nothing in this world of an equivalent color, saints have accepted defeat and compared His body to these three things because of two qualities each of them possess - 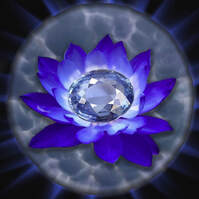 Krishna's color - Neelmani or Blue Sapphire
​For the purpose of Roopdhyan, multiply both the qualities of the above three things infinite times and make a divine body. In that body, also establish the following qualities. Though it is impossible to describe the body of Sachchidaanand in material words, still we will throw some light on some of the qualities of Shri Krishna’s body.
Enumerating some more characteristics of Shri Krishna's Body

More blissful than Brahm
Shri Krishna’s blissfulness is so unique that since time immemorial, there is not a single example of one who, after attaining Brahm, has not gotten completely enchanted upon seeing Shri Krishna. His form is so blissful that if  the bliss of brahmanand, the bliss of Brahm, is multiplied by a hundred quadrillion (1 followed by 17 zeros), even then it will not be equal to even a drop of the bliss of premanand, the bliss of love.
Sweeter than sweetness
​Whatever may be the sweetest thing you can imagine, multiply its sweetness infinite times. Shri Krishna is even sweeter than that.
Naughtier than naughtiness
Mesmerizes Cupid (Kamdev)
Shri Krishna is the ornament of His ornamental attire
Softer than softness
In the world tenderness is compared to petals of a lotus flower. The body of Goddess Mahalakshmi is infinitely softer than lotus petals. Goddess Mahalakshmi’s hands are infinitely softer than Her body. Shri Krishna’s body is infinitely softer than Her hands, and Shri Krishna’s feet are infinitely softer than that. His divine form is so tender that nothing in the world compares to the softness of His divine body. And His face is even softer than His body.
Fragrance of Shri Krishna
Each one of us has a unique body odor. To combat those odor we humans spray fragrance on our bodies. The bodies of devatas are fragrant but those are also nothing as compared to the Shri Krishna's divine fragrance. From various parts of His body eight kinds of fragrances emanate.

The six stages not present in Shri Krishna’s body 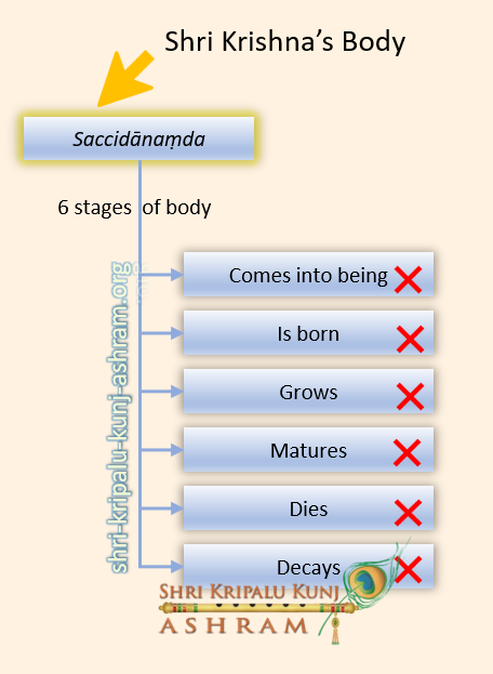 ​In Golok, Shri Krishna’s body does not have any of the above mentioned states. He always remains in a 16 year old youthful state.

​You may ask about - what happens during His descension?

During Shri Krishna’s descension, the mother feels as though the baby has entered the womb, in other words, the state of asti or beginning. The mother only has such a feeling, but in reality Shri Krishna enters her inner consciousness, not the womb (3).

Then in the state of being born, i.e. jaayate. Even here, you would have heard during the descension of Ram, that when He was born, He appeared as a 16 year old in front of the mother Kaushalya. That is when mother asked Him to become an infant. Additionally, she sought the boon that she forgets His Godliness. He granted her the boon and changed into the form of a one day old baby. Similarly, in Krishna's descension as well, first Devaki saw His 16 year old divine form and then He became a infant. He was not born like an ordinary child. Yet, in both cases mothers were convinced that He was born from their womb.

Later, Shri Krishna’s body grows for 16 years. This state is called vardhate. Though He was a child, yet He was NOT confined to that state. You must have read in many poems in Prem Ras Madira that  in order to please the devotees, Shri Krishna used to become older at will e.g. during Maharas and also the situation described below.
"O Queen of Nand! you alone stay in Braj Dham. We are all leaving this place for we are fed up of your son's non-stop pranks. Don't think He is a little baby. He grows up whenever He feels like it". This is a rasik gopi's queer way of getting an opportunity to see Him and talk about His pastimes without seeming like she is smitten by His sweetness. 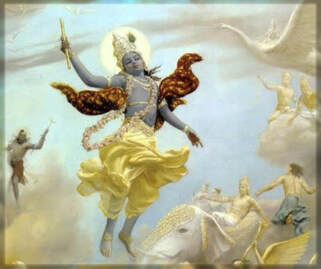 Krishna's ascension from Earth to Golok
Even during His descension on Earth the last three states;
​Viparinamate - maturing,
Apaksheeyate - wearing off,
Vinashyati - ending
do not exist in Shri Krishna’s body. You might have heard in Shrimad Bhagawat Mahapuran that after 125 years Shri Krishna ascended to His Golok along with His divine form. Shri Ram ruled Ayodhya for 11,000 years and then submerged in the River Saryu (Jal Samadhi) and disappeared.

There are many more unique qualities in His body, which are indescribable through words. But as you progress in devotion you can experience them.
So, what is the point of describing all of these characteristics of Shri Krishna's divine form?

In general people are not attracted to just an object; instead they are attracted to beautiful objects. Hence, grow all these good qualities to the greatest extent that your mind and intellect can conceive. Assimilate and imbue all of them in one divine body.

Without practice one cannot attain one’s goal. Hence, while doing Roopdhyan, create a divine body with all these attributes. Then worship this Shri Krishna, who is imbued with all divine qualities. On reaching the culmination of ﻿Bhav bhakti﻿, Guru, through His grace, will transform your material mind into a divine mind. After that, you will also get the vision of that very divine form of Shri Krishna, which forcibly abducted the minds of great   paramhansas like Kumars in satyuga, king Janak in tretayuga, Shukdev in dwaparyuga and Shankaracharya in Kaliyuga. Just like they left their state of non-duality and became completely engrossed forever in the sweet duality of Shri Krishna, you too will get immersed in the divine form of Shri Krishna. Just keep doing sadhana bhakti then you too will one day say
If you enjoyed this one, you might also like
We have quoted these sweet verses from the following books. These books are a treasure for spiritual aspirants. And you can order them online. We do hope you will choose to explore the divine treasures and benefit from them.
https://www.jkpliterature.org.in/en/product/prem-ras-madira-arth-vol-1-2-
https://www.jkpliterature.org.in/en/product/prem-ras-madira-1
​https://www.jkpliterature.org.in/en/product/radha-govind-geet