SHRI KRIPALU KUNJ ASHRAM
to  Deepen  your  understanding  of  Philosophy  of  Divine  Love  Bliss
You have seen and heard living beings being born in multiple ways. In the scriptures you might have heard of some types of births that might be difficult to comprehend. And, there might be some that you have not even heard.

​So here we briefly describe the types of life forms found in the creation and divine world. Total there are ten life forms; nine of which are material and only one is divine.

​Let us briefly discuss them here 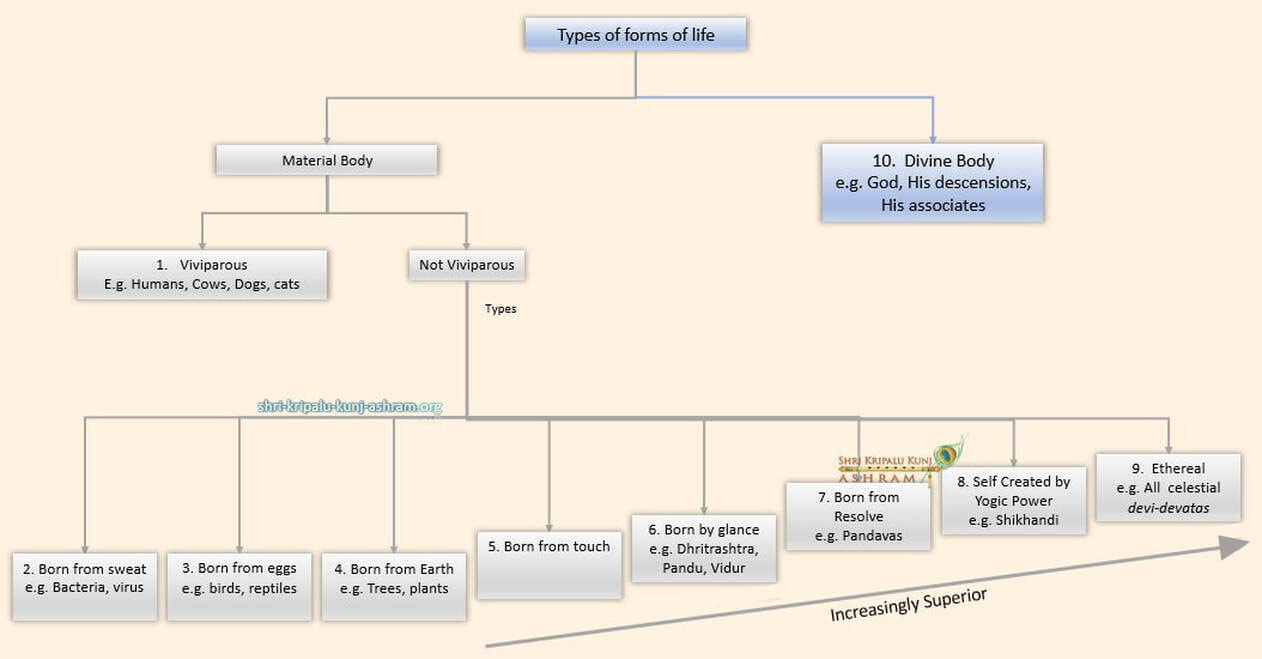 ​1. When the baby's body is developed inside the body of the parent those are called viviparous life forms. These includes human beings and many animals like cows, goats, whales etc.

In the not-viviparous category there are many sub categories. Of the ones listed below first three are very well known to us since those are within our everyday experience on earth. ​

2. Born from sweat (Svedaj) – Sved means sweat. So those bodies that are created by sweat or moisture fall in this category e.g. lice, bacteria, viruses etc

3. Born from eggs (Andaj) - The bodies created from an egg, such as sparrows, snakes etc.

4. Born from land (Udbhij) – those that are created from earth. Ud means ‘created’, and bhij means ‘from earth’. E.g. trees, shrubs etc.

​There are 5 more not-viviparous type of bodies. Some of these you might have heard in the  scriptures. Each of these subsequent one is increasingly superior than the previous one.

5. Born from touch of the upper body is called ūrdhvaretā saṃkalpajaj (​ऊर्ध्वरेता संकल्पज शरीर). The body of a child born merely by the touch of the part of the body above the waist.
​

6. Born by glance (​दृष्टि से उत्पन्न): You must have heard this in Mahabharat, where Ved Vyas cast his glance on Ambika, Ambalika and their maid, and subsequently Dhritarashtra, Pandu and Vidur respectively were born
​

​There are 2 more material bodies that are not formed by union of male and female, yet they too are material.

10. God Himself and His descensions all have divine bodies (सच्चिदानन्द​). In addition to them, after God realization, a soul also gets a divine body (सच्चिदानन्द). Though both body and jeev are divine yet after God realization there is a distinction between the body and the jeev. In other words, the soul and its body are two separate things. In this category, the attributes of Shri Krishna's body are different from all others. (1)

Read about Shri Krishna's body in more detail in ​What is so special about His Divine Form?
If you enjoyed this one, you might also enjoy