Why the condition of selflessness? 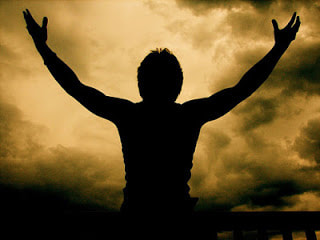 Crying out to God
Question: Crying out to the Lord Almighty without any trace of a desire for self happiness is considered as the strongest pillar of devotion. However, we tend to call out to God, our most merciful all powerful eternal father, only when we are in despair, when all the doors are closed on us, we lose all hope or when we really want something and cannot find a way to get it. Is there anything wrong in calling out to God, in such situations?

Answer:
It is true that God is all-powerful, all-merciful and our only and true well-wisher. He is the sole Master of the material and the Divine worlds. He is the Only source of All happiness. This is unanimously stated in all scriptures.

To answer the above question, let us try and analyze the characteristics of different types of people, who ask God to fulfill their desires: 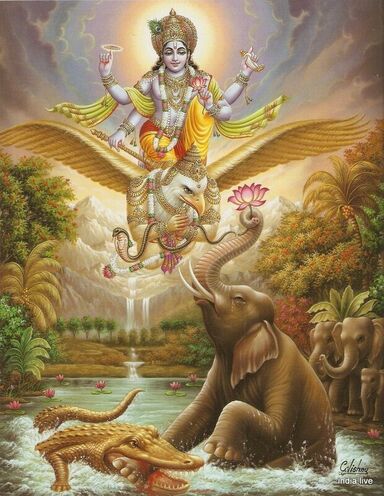 Hearing the desperate call of His devotee, Lord Krishna appeared to save him.
1. Those who are fully surrendered to God: Such surrendered devotees get whatever they ask for. These devotees can be further sub-divided into 2 main categories:

a.       Those who ask God for material objects: For example, Draupadi called out to Shri Krishna to save her honor when she was being disrobed by Dushasan in the court of King Dhritarashtra. Draupadi was a fully surrendered devotee of Shri Krishna and Lord Krishna came to her rescue.

Little Dhruv prayed to God to grant him his father’s kingdom. God granted him that wish.

Gajraj, the king of elephants, went with his family to a lake at Trikut for a drink. While he was in the water, a crocodile grabbed his leg. His family tried to help him but could not release him from the clutches of the crocodile. He fought hard to free himself, but was unsuccessful. Finally when he lost all hope, Gajraj called out to Shri Krishna to save his life and held up a lotus flower in his tusk as an offering to Him. Hearing the desperate call of His devotee, Lord Krishna appeared to save him. Eventually Lord Krishna sent Gajraj to His divine abode of Baikunth.

So whenever a fully surrendered accomplished devotee asks God for anything, God grants the devotee his wish. But in this case, the devotee gets the short end of the stick. God promised in Gita:
अनन्याश्चिन्तयन्तो मां ये जना: पर्युपासते | तेषां नित्याभियुक्तानां योगक्षेमं वहाम्यहम् ||
ananyāścintayanto māṁ ye janā: paryupāsate | teṣāṁ nityābhiyuktānāṁ yogakṣemaṁ vahāmyaham ||
“To those who worship Me exclusively, I grant what they lack and preserve what they have”.

But he cleverly said in a verse of Shrimad Bhagavat 11.20.32
यत्कर्मभिर्यत्तपसा ज्ञानवैराग्यतश्च यत् योगेनदानधर्मेण श्रेयोभिरितरैरपि ॥
सर्वं मद्भिक्तियोगेन मद्भक्तो लभतेंजसा, स्वर्गापवर्गं मद्धाम कथंचिद् यदि वांछति ॥ भा.
yatkarmabhiryattapasā jñānavairāgyataśca yat yogenadānadharmeṇa śreyobhiritarairapi ॥
sarvaṁ madbhiktiyogena madbhakto labhateṁjasā, svargāpavargaṁ maddhāma kathaṁcid yadi vāṁchati ॥ bhā.
The devotees of The Supreme Lord attain the rewards of the path of Karm, Gyan, Yoga and any other foreseeable means. After attaining Divine love bliss, the devotee rejects all other achievements and remains thoroughly absorbed in the ecstasy of the Ocean of the nectar of love. After counting all the measures and material and spiritual gains, in the end He cleverly added:
कथंचिद् यदि वांछति
kathaṁcid yadi vāṁchati ॥ bhā
“If ever the devotee wants to enjoy the fruits associated with any other means, those fruits are already granted to the devotee”. A clever devotee does not ask for anything. Not even liberation. Lord Ram offered liberation to both Kagbhusundi Ji and Hanuman Ji  but both of them refused.

God is the greatest personality; He is the master of all powers, yet He is enslaved by love. A devotee, who only desires to please his Lord with his devotion, attains the love of God. But if a devotee asks for a particular thing, he gets only what he asks for, nothing more. God is very eager to bless an individual soul with different supernatural powers and even liberation but is very reluctant in imparting divine love. He bestows divine love on a select few; as after granting divine love to a devotee, God becomes an eternal bonded slave of that devotee. 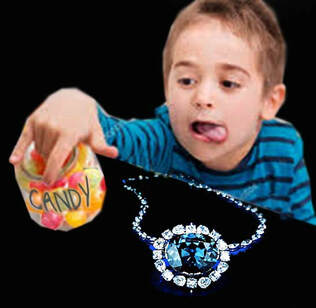 Just like a child doesn't know the value of things and chooses candy over a precious diamond necklace, we don't know where true happiness lies hence we chose the worldly pleasures
2This kind of love, though not deplorable, is not commendable as this love is highly dependent on the amount of attention paid by the beloved to the lover. It waxes and wanes and does not even remain constant, let alone be ever-increasing.

​2.       Those who are not surrendered:  Most of us fall in this category. Devotion, which is practiced while harboring material desires has many dangers.

a.   The aspirant doesn’t know where true happiness lies – in the material world or in God. Most people barely worship God, at best for couple of hours a day and remain fully engaged and attached to the material world for rest of the time. Due to those couple of hours of devotion, they may claim to be real devotees. And, whenever any problem arises or there is a strong desire to attain anything, they ask God. These people do not love God; instead they love their desired object and worship God as a means of attaining it. They innocently believe that probably their physical acts of devotion would deceive God and He will satisfy their desire. They ask divine God for material matters. It denotes such aspirants do not even know if happiness is in the world or in God. They should think about it deeply. If happiness is in God, why do you ask for material matters. And, if it is in the world, why should you go to God?

b. When after offering constant prayers, people finally acquire material possessions as per their own destiny, they misunderstand it to be due to the Grace of God: and when they don’t receive it, as it is not in their destiny (2), they take it to be a sign of God’s wrath. Thus, a person remains a believer as long as he acquires worldly possessions and becomes an atheist when he is deprived of them.

c. God does not break his law of granting possessions contrary to one's destiny:
कर्म प्रधान विश्व रचि राखा । जो जस करइ सो तस फल चाखा ॥
karma pradhāna viśva raci rākhā । jo jasa karai so tasa phala cākhā ॥
“One gets the assets of the world, according to his own destiny created by his own karmas”.

It is God’s law “Everyone gets awarded a result of each action, which is known as destiny in future”. If someone claims that God always listens to their prayers and fulfills them, then he is a fortunate exception, for whom God has violated His own law. Now, why doesn’t he ask God for God Himself, so that the habit of begging ceases forever.

Why does he keep asking for material objects and continue to add fuel to fire of ever growing desires? It is good that the person considers getting things as grace of God. But the harmful consequence is that when his material desires are not fulfilled then faith in God also disappears.
“When I am specially gracious to someone, I deprive him from him of his material wealth”, since deprivation of material happiness makes a person humble and humility is the first step for devotion. In this state, a person is not intoxicated with the pride of material opulence. This is the reason why Kunti asked Lord Krishna for an amazing boon –
विपदः सन्तु नः शश्वत्तत्रतत्र जगद्गुरो । भवतो दर्शनं यत्स्यादपुनर्भवदर्शनम्॥ भ १.८.२५
vipadaḥ santu naḥ śaśvattatratatra jagadguro ।
bhavato darśanaṁ yatsyādapunarbhavadarśanam॥ bha 1.8.25
“O Lord of the Universe ! I beg You to give me sufferings at each step of life, so that I may remember you all the time”.

Therefore, we should desire this blessed state. What is the point of asking for material things from God that distract us and cause us to forget Him?

So, in the preliminary stages of devotion, all desires of material objects and desire of mukti should be renounced. We should desire only for “Our” self-interest i.e. the self interest of the soul, that is attainment of selfless Divine Love for God.

We must beg God for His divine vision and love. The sole aim of attaining divine love is to serve Him to please Him. This selfless love, enslaves the Almighty God and He bestows all His divine property to the devotee viz; divine knowledge, His divine abode, His divine bliss and His divine beauty.
जब लौं न त्यागा स्वार्थ गोविंद राधे । तब लौं न प्रेम श्रीकृष्ण में बता दे ॥
Love for Shri Krishna will not take root till you give up the desire for self happiness.
- Jagadguru Shri Kripalu Ji Maharaj
If you enjoyed this one, you might also like