Though all Jeev are eternal servants of God, He has given us permission to worship with with any of the following devotional sentiments. These sentiments are called bhav.  Also, He promised to reciprocate every bhav in intensity and sentiment. 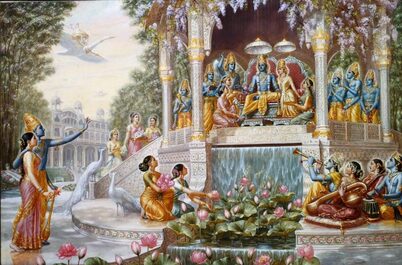 In Vaikunth devotees cannot have intimate relationship with Lord Maha Vishnu
In Shant Bhav (शांत भाव) God is the king and jeev are the subjects. The devotees of Shant Bhav go to Baikunth Lok and always live in association of Lord Vishnu. His four arms, the divine disc and the club are a constant reminders of His divine powers (ऐश्वर्य​).

In Vaikunth the devotee can never have any intimate relationship or close association with Him. Devotees love and pay immense respect to Lord Vishnu but from a distance.

The subjects enjoy unlimited divine bliss of his beautiful divine form and association constantly. Yet there are no eternal associates(परिकर) or leelas (लीला). Hence there is always a distance between devotee and God.
​
These devotees can go up to Prema bhakti.
शान्त​ भाव वालों को गोविंद राधे। भक्ति प्रेमा भक्ति तक ही पहुँचा दे ॥ राधा गोविंद गीत 5615
śānta​ bhāva vāloṃ ko goviṃda rādhe। bhakti premā bhakti taka hī pahum̐cā de ॥ rādhā goviṃda gīta 5615
That’s why the rasik saints do not count it in the area of rasa (nectar of Braj). The realm of rasa starts from Dasya Bhav. The other four relationships that can exist with Shri Krishna are listed below - 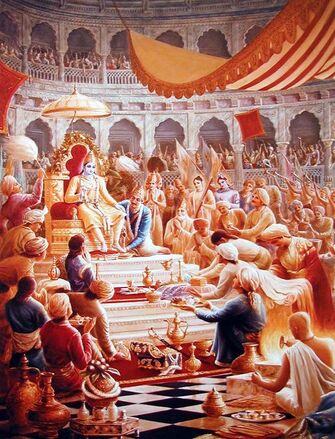 But there is no parity between sewak (servant) and Swami (Master); a servant can’t sit beside the Master or embrace him. A servant gets more association (darshan), personal sewa (bliss of touching His divine body and smelling His divine fragrance), conversation (bliss of hearing His divine words) and a chance to witness His pastimes (bliss of seeing His divine leela).

To top it all the sewak attains love and favor of Shri Krishna. His mind remains so engrossed in servitude that he serves everyone wholeheartedly viewing his master sitting in their hearts too. Desire of sewa and loyalty are the main virtues in Dasya Bhav.

A sewak can aspire only up to this extent-
"O my swami ! I wish to serve you till eternity. Hence when I die, I wish the water element (जल see Panch Mahabhoot) of my body should mingle with the water of that pond in which You enjoy bathing, the fire (तेज) element merges into that mirror in which you see your face, the space (आकाश) element merges into in the ambience of that place, where you play joyfully, the air merges into the air (वायु) of fan which gopis use to serve you and the element of earth (पृथ्वी) should merge into the earth of your popular way of walking.” 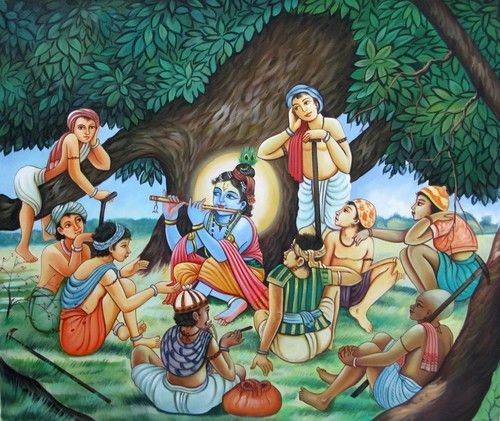 1. Who love Shri Krishna adoring His majesty: examples of this relationship are Arjun and Uddhav

The following verse shows their immense love towards Shri Krishna. They did not even have an inkling that He was God (1). 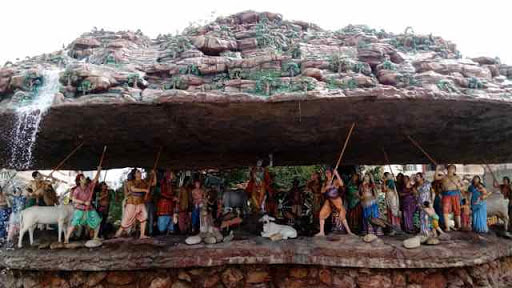 Shri Krishna holding Govardhan Mountain on the nail of his left pinkie
"O Kanha! You are holding this mountain on your little finger of left hand. We are terribly pained to see you hold a single posture and not eat or drink anything for seven straight days. Please hand it over to Shri Dama for a while. Or if you don’t want to do that then please hold it with the finger of right hand. So, we will press your left hand. We cannot see you like this anymore.”

Once, friends had put wager that the loser will become a horse and winner will ride on the losers back. Shri Krishna lost so friends compelled Him to act like a horse and cowherd boys rode on His back. Brahma saw this amazing scene and says
"What a grace on these illiterate cowherd boys! The veritable Bliss, absolute Brahma-Supreme God has become their eternal bosom buddy!!"

Loving Shri Krishna as a son is Vatsalya Bhav (वात्सल्य भाव). Pampering baby Shri Krishna with extreme parental love is the chief traits of Vatsalya Bhav.
वात्सल्य में है निष्ठा गोविंद राधे। सेवा विश्रम्भ ममता बता दे  ॥ राधा गोविंद गीत 5606
vātsalya meṃ hai niṣṭhā goviṃda rādhe। sevā viśrambha mamatā batā de ॥ rādhā goviṃda gīta 5606
The bliss, that Nand Baba experiences when Shri Krishna sits in his lap surpasses words. Mother Yashoda's state is inexplicable when the Supreme Lord drinks her milk. This bliss is so sweet that devotees of Vatsalya bhav never ever want to know that their son is God. They want to enjoy their son to the fullest. Once Yashoda adorned her little baby Kanha in beautiful clothes and tiny ornaments. After sometime she stepped away for a bit. When she returned she saw him playing in mirk (water mixed in dirt).

​She got angry and scolding her child she said,
“Who can be more blessed saint on this earth than mother Yashoda! She has tied Shri Krishna to a mortar. Let alone Shri Krishna Himself, even His name is so potent that it grants liberation to the individual souls. That Shri Krishna is crying and begging Maiya to release Him”.

Shukdev Paramhans also says-
“The grace attained by Yashoda is not accessible  even to the son of Shri Krishna - Brahma, the most loved Shankar and eternal consort Maha Lakshmi, the one who always resides on His chest (the Shri Vatsa sign)”.

Samartha Rati (समर्था रति) is like Kaustubh Mani, which is not found anywhere else in the universe except with Shri Krishna only. Precisely, Samartha Rati is exclusively found in Gopis only.
Samartha rati is laden with unique nature of love-sentiments, which easily fascinates Shyam Sundar. Even a hint of this love terminates shyness, patience, modesty and all other kind of obstacles immediately. A gopi whose heart is brimming with of Samartha rati says –
They openly proclaim, “we don’t care at all if anyone defames us by accusing our character, clan,  immorality, family etc. We don’t care if the entire world rejects us. We also don’t care for achievements of This planet or thereafter or even higher planets. We have chosen the unique path of love and our life is entirely sacrificed to Shyam Sundar alone.” 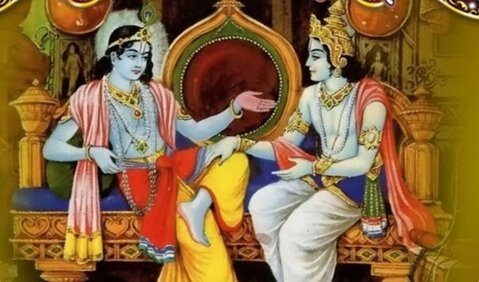 Shri Krishna convinced Uddhav to impart knowledge to gopis
Gopi's love is called Madhu Sneh in which the devotee has a very heightened feeling of “He is mine” hence I love Him. This is the reason, no matter how adverse the situation might be, the fervor of their love never diminishes.

​Based on the bhav and selflessness of relationship, the divine bliss can be categorized into 8 levels out of those Mahabhav is the highest level. Only the gopis can rise up to Roorh Mahabhav.

A Rasik saint depicts their love beautifully in this composition.

Uddhav, the foremost gyani of Dwapar Yug, was very dear friend of Shri Krishna. Shri Krishna wanted Uddhav to give up his gyan of impersonal form of Brahma and taste the sweetness of love. But Uddhav was very proud of his gyan. Also, being a friend he could have dismissed the advice of Shri Krishna. So, Shri Krishna devised a clever plan to convince Uddhav to visit the Gopis. He said,”Gopis used to love Me a lot. Now that I have left Braj they are devastated. Go give them your knowledge, so they can overcome their pain".

The Gopis are the professors in the school of love. Shri Krishna was sure that after seeing the exclusive love of the Gopis, Uddhav would surely discard his pride of knowledge and assimilate the true meaning of knowledge which is true love for God. Without love gyan is nothing but sheer ignorance.

So, Uddhav went to the Gopis to impart the insipid knowledge of Vedant to convince them to forget Shri Krishna. He told them,“Shri Krishna does not love you anymore. The gyan of Vedant will help you renounce all attachments resulting in peace of mind and liberation”.

Hearing this, the Gopis mocked His knowledge and said -
“O Uddhav! Convey this message to your friend as it is. He should not try to be-fool us. We have accepted Him as our beloved. In other words we have solely surrendered  our life to Him. Now we cannot even die unless it is His wish. He might not have submitted His life to us but we have. So, we will wait for Him for millions of lives until He decides to come back. We, however, do fear that the world will lose faith in His graciousness”.
समर्था रति तो गोविंद राधे। सर्वोच्च भक्ति महाभाव दिला दे॥ राधा गोविंद गीत 5648
​samarthā rati to goviṃda rādhe। sarvocca bhakti mahā bhāva dilā de॥ rādhā goviṃda gīta 5648
Those with samartha rati rise to the level of Mahabhav bhakti .
Suggested Reading