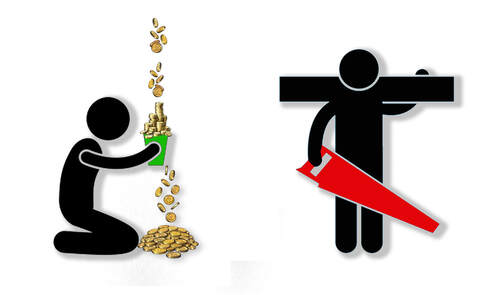 ​Depending on the kind of action performed, it is called one of four things: man, buddhi, chitta or ahankaar
Mind is the doer. It remains in a constant state of activity and does not stay inert even for a fraction of a second. It works even while the body is at rest during sleep. The only time it rests is when one is in the state of deep-sleep (dreamless state) or shushupti (सुषुप्ति).

The actions performed by the mind may involve:
As per the spiritual law, every action (karma) results in an outcome. The karma are divided into three categories. The actions performed, using our rational faculty, are called kriyamaan karma (क्रियमाण कर्म). Even though the result of each action is decided as soon as the action is performed, yet out of His kind mercy, God makes us bear the fruits of only some of those actions instantaneously for e.g. when we eat food, we feel full, when we drink water, our thirst is quenched. For all other actions, we do not have to bear the fruits of those actions instantaneously. These fruits are preserved in the subtle mind and have to be borne in multiple future lifetimes. These countless actions are called sanchit karma (संचित कर्म) or preserved-actions. From the karmas performed in previous lifetimes, God selects a few karmas for which one has to bear the fruits in this lifetime. Those select few karmas are called prarabdh karma (प्रारब्ध कर्म), also known as destiny, fate, bhagya (भाग्य), kismat (किस्मत​), niyati (नियति) etc.

Everyone has to endure prarabdha karma (fate). In everyone's life there are five principal predestined aspects i.e. age, profession, wealth, education and time of death.
“O sons of the demons! Just as the sufferings inevitably befall (without any effort) upon us, similarly everyone attains sense gratification as per their destiny”.
We are rarely grateful to God in good times, but accuse Him or curse our ill-fate in difficult times. As Saint Kabir Das says:
कर्मणां संचितादीनां जीवोऽधीनस्तथापि हि । स्वतंत्रः क्रियमाणे वै कृतो भगवता विदा ॥
karmaṇāṃ saṃcitādīnāṃ jīvo'dhīnastathāpi hi । svataṃtraḥ kriyamāṇe vai kṛto bhagavatā vidā ॥ 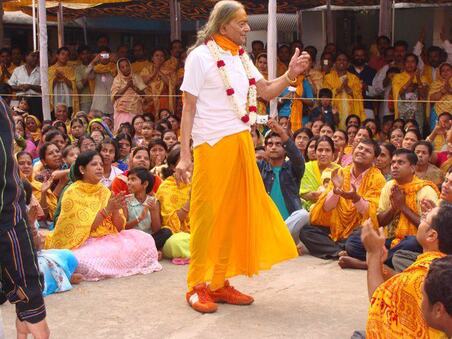 By the association of a true saint, the individual soul becomes familiar with those actions which lead to a happy and ideal future
“Though living beings are constrained by their sanchit karmas, yet they are free to perform good or bad kriyamaan karmas”.

Given our freewill, we have the freedom to perform actions. Also, every action results in an outcome. Since we want to attain an ideal life, a logical deduction would be that we need to perform ideal actions. Following the advice of ignorant beings cannot lead us towards making wise decisions. That’s why satsang - association with a true saint (see Saint or Imposter) - is so important. By the association of a true saint, the individual soul becomes familiar with those actions which lead to a happy and ideal future (see Aim of Life).

All the karmas are driven by one of the three guna of Maya. So they can be classified into three kinds:

1.     Sattvik - virtuous actions. These are also called good actions. Honesty, purity, kindness, sympathy, compassion etc.are considered as virtues. Actions inspired by these virtues are called sattvik karm and lead towards celestial abodes. In those abodes one is provided with great sensual pleasures. However, sense gratification in these abodes is limited and short-lived. One can enjoy the luxuries of heavenly planets only as long as the fruits of one's predestined virtuous actions exist. When these are exhausted then one falls into the cycle of birth and death.

So, if one aims to attain the permanent and ever-lasting happiness then sattvic karm are not recommended.

2.     Rajas - selfish actions - that can best be explained as somewhere in between good and bad. These actions are inspired by selfish motives. These actions result in an individual soul roaming in the cycle of birth and death in various forms of life.

3.    Tamas - bad actions - the bad attributes of dishonesty, anger, passion, greed, lust etc. which lead us towards sufferings are called tamas. The result of these actions is to undergo  sufferings of narak for an unpredictable amount of time.

Thus according to the theory of karma, no good or bad actions are capable of permanently delivering us from our sufferings.

At this point, you might wonder “We have been born in a human form. Is there no action,that can deliver us from the miseries of life forever?” Yes, there are! To learn about such actions we need the association of a true saint, who has already attained that everlasting, unlimited bliss.

The rarest of rare human form is not meant only to undergo the results of our good and bad deeds. We have been given free-will and as a rational being we are expected to progress towards the ultimate goal of life.

Never think ‘’everything would fall in my lap without exerting any effort’’. Suppose, you are destined to be rich. You will attain a lot of wealth in accordance with your virtuous karma. Also, that wealth might last for the whole lifetime or not. If you are not industrious, what will you do when you aren’t destined to be rich? Further, money alone does not provide everything needed for a fulfilling life. You need many other things in life, which may or may not be predestined e.g. attaining unsurpassed bliss. What will you do for those needs of life? So, being a diligent-worker with a positive mindset is very important.

That is the main purpose behind performing well-intentioned good actions.
Love our Publications!!