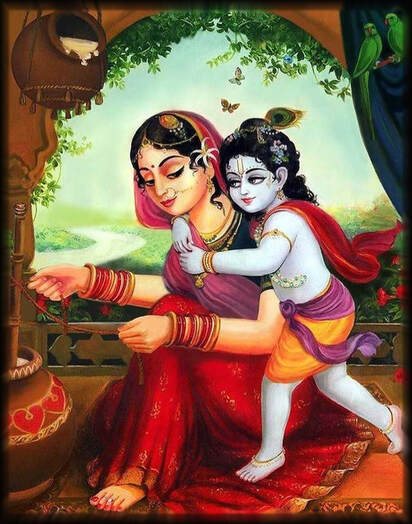 ​It is said that God is self-complacent, which means that He does not have any unfulfilled desires. If this is true then why does God perform any action, let alone actions such as creating the world, permeating it and sustaining it? When He has no desires, why does He take birth, and act like a normal child rolling on the ground to grab Yashoda Maiya’s attention? If you say, God does everything to please His child - the Jeev, then that too is a form of desire. So, the question arises - is God self-complacent or not?

Answer
​
God is self-complacent, because He is Anand-kand (reservoir of bliss), Atmaram (ever happy with Himself), Atma-kreed (enjoys His own self). At the same time, this is also true that God performs innumerable miraculous actions.

​We, ignorant beings have an overwhelming desire to attain unlimited, everlasting bliss. All our thoughts and actions are geared towards attaining that bliss for ourselves.

​For us, it is practically impossible to perform any action without a desire, though it may appear that we perform numerous actions on a daily basis that we dislike such as waking up early in the morning to go to school or work, following the instructions of our boss at work, exercising, eating healthy food or taking medications. Similarly, we also perform certain actions involuntarily without being consciously aware of those actions such as blinking, taking a breath in and letting it out. Behind all of our actions (except the involuntary actions), there is an underlying incentive that prompts us to perform those actions such as maintaining harmony at home, fear of punishment, desire for reward and recognition at work, maintaining good health and more. Now unlike us, God has no unfulfilled needs or desires. Since we can’t do actions without a desire, why He performs any actions baffles us. Yet He does! Why?​

Why Does God Performs Any Action 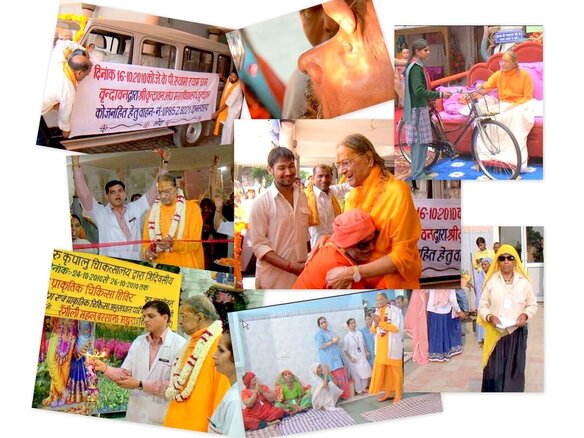 Performing Vedic injunctions while having no love for God does not help attain the ultimate aim of life. Still the mere performance of those actions instills respect for Vedic Scriptures in the minds of people. This in turn inspires them to lead a pious and peaceful life and deters them from engaging in unbridled behavior. Later, this faith in scriptures might reduce the allurement to worldly attractions and instill a desire to attain more true scriptural knowledge.

When Shri Krishna descends on this earth, He abides by the same ideology as He preached in the Gita.  He created the world. Many innocent people ask, why did He create the world of Maya, which is spoiling our innumerable lives. The answer is – His nature of Mercy. The individual souls are eternal. Maya is also eternal. The Vedas say - 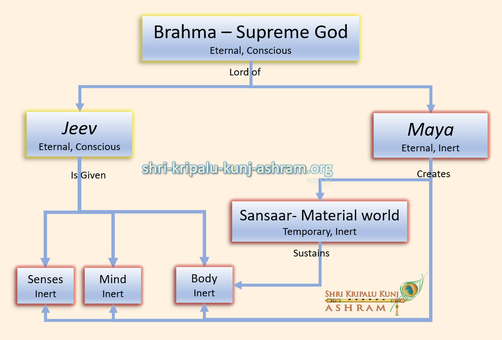 Jeev is the part of God’s power of consciousness (जीव शक्ति), hence it is sentient. Maya is inert. So, sansaar- the world manifested by Maya is inert. Before creation, jeev remained in the infinite belly of God. In that state, they do not have a body or mind hence they are totally inactive and cannot derive any benefit from their existence. Hence, Merciful God gives us a body and mind and sends us into this world.

Body and mind are necessary instruments to perform actions. So, God also created the world of Maya to nourish the body. All this work was done so that jeev can know God and attain unlimited divine bliss. But instead of using the world for sustenance and pursuing God, jeev got attracted to the illusive fascination of the world and forgot the aim of his advent on this earth. ​ 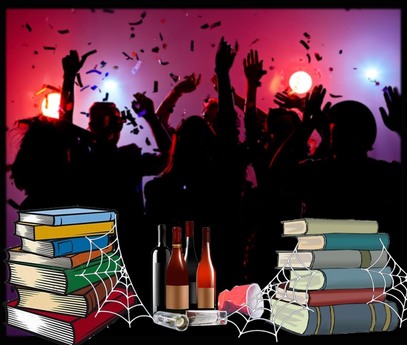 Child forgets the aim and gets involved in other imprudent activities. Whose fault is it?
The sansaar- the world which was given to us to use as a means for God realization, is used as a source of sense-gratification. This can be compared to a child going to another country to accomplish a particular education in a university, but once he gets there, he forgets the aim and gets involved in other imprudent activities. In the process he loses money, puts the desired achievement on the back burner and loses his character.  Would you consider this to be the fault of the University where he enrolled or the parents who sent him for higher education? Similarly, our eternal Father sent us to the university of the world to attain the ultimate goal of life. Teachers appointed by God (genuine saints and scriptures) constantly teach us about our goal and we get punished for our misdoings by Maya. Yet, we indulge in fantasizing the objects of the world and forget our aim of coming into the world as a human being.

God descends (2) from time and time to put forth the ideals of leading an inspirational life. Few of us pay heed to His teachings and follow Him. He instructed all of mankind to follow the philosophy of Karma to be happy in the world, but we ridiculed Him.

He divided Himself in two personalities, Shri Radha Krishna to teach us the real form of Love (3) by His practical ideology and loving pastimes. But we ignorantly criticized Him and rejected His divinity.

He sits in the hearts of everyone and notes down each thought that goes through our mind, so that as soon as we surrender ourselves to Him, He may bestow His grace upon us. He also punishes us for our carelessness, so we become serious about our path to attain the ultimate goal of life.

He kills demons to release the world from their brutalities, yet He is so kind and soft hearted, He sends them to His divine abode after killing them.

Conclusion:
He seemingly performs all the actions an ordinary being does and much more. Yet the reason behind each action is the benediction of the souls alone. ​ 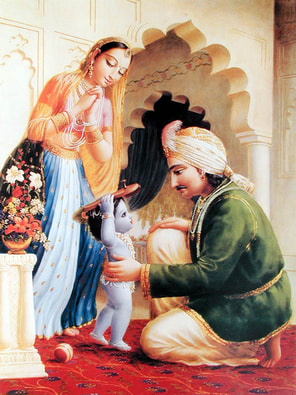 Shri Krishna carrying Nand Baba's slippers on His head
He doesn’t need anything, yet He tirelessly helps the souls because of His merciful nature. He is so gracious, that though He is the Supreme Lord, yet He becomes a slave to His own devotees. He upholds His promise of reciprocating the feelings that a devotee has towards him to the same extent and with the same sentiment towards the devotee. He is the master of all, yet He becomes a son, a friend and a beloved of ordinary devotees. He is a fair and prudent judge, yet, in case a devotee calls Him out just once with complete submission, He forgives all the sins committed by the devotee in their infinite lifetimes (4).​

The self-complacent Almighty God does nothing for Himself. Instead He performs all kinds of actions only for the welfare of the people. Through His pastimes, sometimes He gratifies them and sometimes He teaches an important lesson to all.