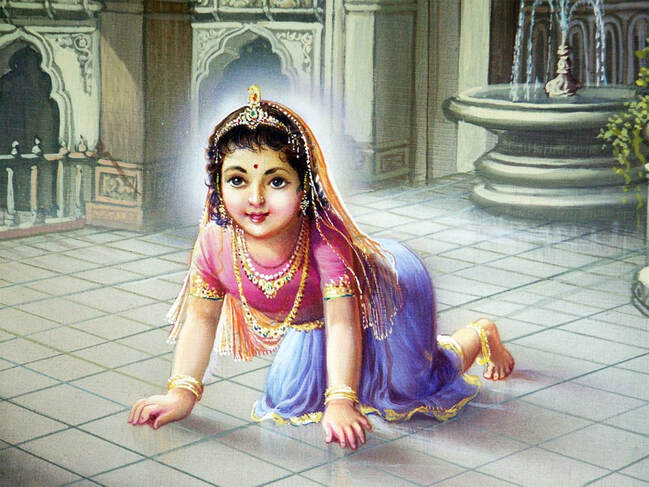 Many people know about descent of Shri Krishna and Shri Rama appeared on the planet earth. But very few people know the about appearance of Shri Radha. This is a brief description of the events when Shri Radha appeared on this earth 5000 years ago in a village called Barsana, in the state of Uttar Pradesh in India. The Sanskrit word for birth is Janma which means Praakatya (appearance).

Kishori ji had appeared in Kirti Maiya’s house. Radha Tattva had descended on earth. Shri Radha is no different from Shri Krishna. The Vedas say, Krishna appeared on earth in two forms - Radha and Krishn.

Just like Shri Krishna descended in mother Yashoda's house and Shri Ram in mother Kaushalya's house, Shri Radha descended in mother Kirti's house. Also, just like mother Yashoda did not want to know the Godliness or Majestic form of Shri Krishna and just wanted to enjoy the loving intimacy of a mother-child relationship with Him. Mother Kirti too wished to shower motherly affection towards God. So, Kishori Ji never revealed Her Majestic form to Her mother. She appeared as an ordinary child and Kirti Maiya had no idea that her beloved daughter was a divine descension. She firmly believed that her daughter Radha was born like a normal baby. When mother claimed that Radha was born to her, all others believed it too.

The scriptures however tell us the truth. Ved Vyas said in Brahmveivarta Purana that Radha was not born from Her mother's womb. Brahmveivarta Purana also quotes Shri Krishn saying "You and I never go into the womb. We go into the mind". Let us try to understand the divine personality of Shri Radha Rani. Absolute Brahma Shri Krishna is referred to as Sat (Eternal) Chit (Knowledge) Anand (Bliss). Sat and Chit are encompassed within Anand. The essence of Anand is "Hladini Shakti" and the essence of Hladini Shakti is "Love". Such is the supremacy of Love that all scriptures and scholars proclaim,” Even if you multiply Brahmanad (bliss of formless God) by billions, it will not even be equal to a single drop of Love Bliss. There are various levels of Love Bliss, each higher than the previous one - Prema bhakti, Sneh bhakti, Maan bhakti, Pranay bhakti, Raag bhakti, Anurag bhakti, Bhavavesh Bhakti and Mahabhav bhakti. Mahabhav bhakti is also of 2 types Rudh and Adhirudh. Of these Adhirudh is a higher state than Rudh. Adhirudh is also of 2 types "Modan" and "Mohan". There is one more state called "Maadan Mahabhav", which is higher than all other states of divine love bliss. No Saint has ever obtained it. Even the intimate friends of Shri Radha Rani - The Eight Mahasakhis (eternal intimate associates) cannot attain it. This seat is reserved for Radha Rani alone.

We can get a glimpse of the state of love-bliss of Shri Radha by learning the fact that during Their descension in Braj, Shri Radha fell in love with Shri Krishna by simply hearing His name once. Hearing His flute, She united with Him. Seeing a picture of Shri Krishn, She went into a trance. Shri Radha - the personification of this highest form of bliss has appeared in Kirti Maiya's home. What can one say about the good fortune of mother Kirti, who got to love, cuddle, scold, punish, rock and fondle Her. Furthermore, she got the rarest privilege of trying to please Her by bribing Her with toys and sweets etc, when She got upset. Fathers generally get a little lesser proximity with the daughter, brothers even lesser and general public even lesser. But whatever little extent they get, it still is infinitely more than the bliss of bliss-of-formless-God (brahmanand). Such Kishori ji has descended in the house of Kirti Maiya. As is customary, Vedic Hymns are chanted on all auspicious occasions. The important factor in reciting Vedic hymns is the pronunciation and the notes. It has to be perfect. When Kishori ji appeared, none other than Brahma Ji, came down from his abode to recite the Vedas for glorifying Kishori Ji. Brahma Ji considered it His extreme good fortune to personally welcome Kishori ji today. Supreme personality has descended in his Brahmand (creation) to shower divine bliss. Since Brahma ji came, Vedas too followed him. Vedas were not being recited in mere words, instead Vedas themselves stood in Her service. Brahma Ji recited the Vedas with all four mouths. Vedas stood there and offered their services. They are not doing this to receive anything from Her. They consider it their duty. They are drenched in divine ecstasy. They could not control themselves and came un-invited to welcome Her.

Narad Ji and other eternally liberated divine personalities also came and sang Her glories ,"She is very Merciful, She is the protectrice of all surrendered souls etc". Along with singing praises, Narad ji also proclaimed "Victory to Radha Rani", all others joined Him in the same. Yaksh, Kinnar, Gandharvs, and Apsara's sang as well. Bhagwan Shankar Himself came to perform a dance. Shankar ji has a special dance called Tandav Nritya. This dance is performed in trance (Samadhi). Shankar ji, is an ardent devout (ananya bhakt) of Kishori ji. So He, in a state of love-bliss-trance, started performing Tandav. Who will perform her aarti?

There are 3 personalities Brahma, Vishnu, Mahesh. Their Hladini power is Brahmani, Rama and Uma. They emerge from the left part of Shri Radha Rani. Hence it is their duty to perform the aarti of their originator. They personally came down and started performing aarti of Shri Radha Rani, with divine lamps. Some siddh paramhans also reached there. There are some paramahans who have not merged into the Supreme personality like Sankadik Paramhans. They too came. They saw Her and their trance-of-formless-God (Bharmanand-samadhi) turned into a love-samadhi. When they finally regained consciousness all they could say is balihaar. i.e. we sacrifice ourselves on such a beautiful form of the brahmaand that we used to experience. The ecstasy of that moment cannot be described in words. Everyone was so drenched in divine-love-bliss that they had no cares for any material things. Mother Kirti and King Vrishbhanu were showering precious jewels on all who had come to visit them. Instead of being enticed by those jewels, all visitors were seen requesting Kirti Maiya to let them catch a glimpse of the new born baby.
Top
Philosophy 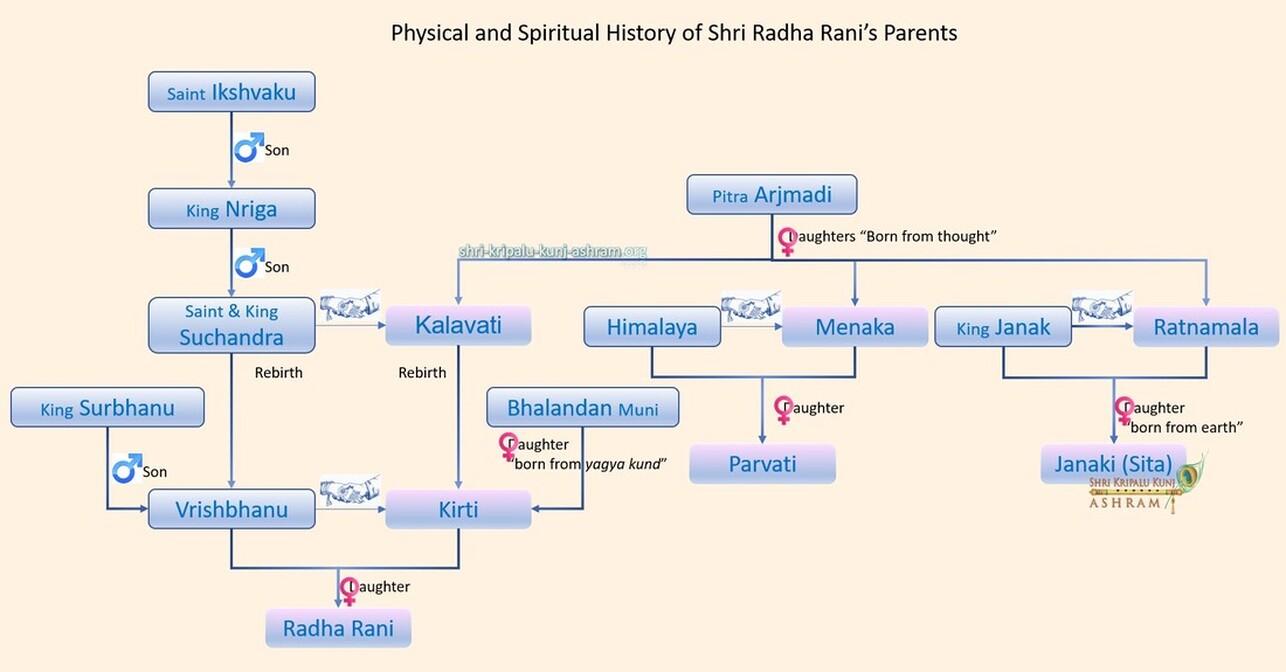 Raja Ikshvaku was a renowned Saint. He had a son named Nriga, who was a benevolent and a just king. He once donated a cow to a Brahmin and somehow the cow escaped and made its way back to his palace and entered the herd of other cows. Per the Vedic precepts re-donating is a sin. Unaware that a donated cow is back in the herd, the king re-donated the same cow to another Brahmin.

When the first Brahmin came looking for his cow, he saw the second Brahmin taking away the cow. The two Brahmins had a disagreement on who was the real owner of the cow. The two went to Raja Nriga for a resolution. Nriga apologized for the mistake. He tried hard to convince both Brahmins to let go of the ownership of the cow in lieu of hundreds of other cows, but both were insistent on having that cow. Unable to resolve their conflict, one of the Brahmins cursed him to become a chameleon.

Once, during the descension of Lord Shri Krishna, his sons Pradyumn etc. were playing and their ball fell into a well. While trying to get the ball back, they noticed a huge chameleon in the well.

They reported what they saw to Krishna. Krishna smiled knowingly and went with them to the well. He rescued the poor chameleon, by extending his arm till the bottom of the well to take him out. As soon as the chameleon was brought out, he turned into a Divine form and attained liberation at the hands of Lord Krishna. Nriga’s son was Suchandra, who was also a great Saint and a just King.

Arjmadi was the Pitr of Pittri Lok. He had three Mansi daughters (born out of thinking) (1)  namely Kalavati, Menaka and Ratnamala.

Kalavati and Suchandra remained celibate and performed severe penances for 12,000 Dev Years, equivalent to 4,320,000 human Years. Brahma Ji appeared and granted them a boon they would be born as Raja Vrishbhanu and Kirti in the Dwapar Yuga and Shri Radha would descend in their household.

​In Dwapar Yuga, Suchandra was born as Vrishbhanu in Raja Surbhanu’s family. Kalavati appeared in the Yagya Kund of Bhalandan Muni, as his daughter Kirti. Shri Radha descended as the daughter of Vrishbhanu and Kirti in Barsana. Unlike a normal material birth, where the soul enters the womb of a mother, Shri Radha did not enter into Kirti Maiya’s womb.
Top
If you enjoyed this one, you might also like
Kid's Story

Saints Grace No Matter What

Once upon a time, there was a devout and saintly old man. Every morning he used to sit on the banks of river Yamuna for several hours to perform devotion to Lord Krishna. One morning, as the old man opened his eyes, after his daily prayer, he saw a scorpion struggling to remain afloat in water. Seeing the helplessness of the poor creature, the kind old man's heart was filled with mercy. With an intention to rescue the scorpion, the old man quickly extended his hand inside the water. As soon as his hand touched the scorpion, the scorpion stung him. Instinctively, the man pulled back his hand. Minutes later, after the old man settled down, he again extended his hand to save the scorpion. This time the scorpion stung him very hard with its poisonous tail. His hand became swollen and started bleeding profusely. The poor old man was in great pain.

The second poisonous sting however could not deter the old man's spirit. He extended his hand yet again to get the scorpion out of the water. A passerby, who was witnessing this incident, could not stop himself and shouted out aloud, “Hey, Stupid old man, what's wrong with you? Only a fool would risk his life for the sake of an ugly, evil creature. Do you want to kill yourself for an ungrateful scorpion?"

The old man turned his head and looking straight into the stranger's eyes replied calmly - "My friend! If this insignificant creature does not give up its habit of stinging, then why should I give up the habit of mercy?

​This is the true nature of real saints. They naturally focus on the welfare of the wicked ones without any reason; likewise wicked people love to infest others without any cause.
Top