Siddhi (सिद्धि) is a Sanskrit word meaning perfection. Attaining a psychic power is called Siddhi (सिद्धि). There are many kinds of Siddhis. All Siddhis, which are attainable by human beings, can be classified into three categories;

Our scriptures assert that Rajas siddhi  (राजस सिद्धि) is the science of liberation. It is the outcome of practicing the knowledge of Tantra and is attained by the grace of Goddess Kali.

The word Tantra is defined in Tantra Sanghita as a combination of two Sanskrit words tanoti (तनोति ) and trayate (त्रयते ). It means the science of expansion of spiritual knowledge and liberation. Since this is influenced by rajas guna, in its truest form it is not evil. Unfortunately, many selfish impious people attain these powers and then instead of using them for spiritual advancement they abuse these powers for obtaining worldly things for their own benefits.

Sattvik siddhi (सात्त्विक सिद्धि) is attained by following the path of yoga and bestowed by celestial demi-gods.  There are eight types of Sattvik Siddhis

i.       Anima (अणिमा) – this siddhi enables it's master to become tinier than the tiniest particle.

ii.      Laghima (लघिमा) – this siddhi enables it's master to become lighter than cotton

iii.     Mahima (महिमा) - this siddhi enables it's master to become heavier than a mountain

iv.     Prapti (प्राप्ति) - this siddhi enables it's master to procure anything from anywhere in the entire universe

v.      Ishittva (ईशित्व) -  this mystic power provides the ability to make the impossible, possible within the material world. The holder of this power can even create a new swarg

vi.     Vashittva (वशित्व) – this siddhi enables it's master to control anything and anyone in the world.

vii.    Prakamya (प्राकाम्या) - this siddhi enables it's master to fulfill all their material desires

viii.   Kamavashayita (कामावशायिता) – this siddhi enables it's master to fulfill their resolutions instantaneously. 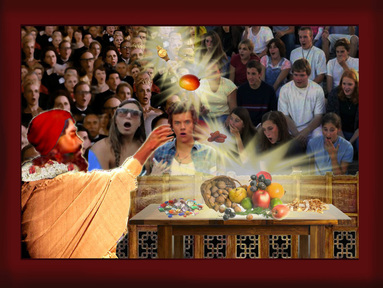 Demonstration of psychic powers to attract peoples faith
All these Sattvic mystic powers seem wonderful, but they are dangerous for both the possessor and the spectator, as for dangers for the possessor of these siddhis include the following:

1.      The possession of these mystic powers creates uneasiness even in the hearts of the yogis.

2.      The possession of these powers inflates the ego, ultimately leading to an aspirant's spiritual downfall. God loves humility.

3.      The power of these siddhis diminishes with each use and eventually disappears.

These siddhis are equally harmful for those who see the performance of miracles using these powers or benefit from these.

The rationale is simple: when ordinary material beings, experience the miracle of these psychic powers, they consider the yogi (i.e. the possessor of these siddhis) to be equal to God, thereby developing faith in the yogi and following his teachings. This wrongful assumption and faith ultimately leads to the aspirant’s spiritual downfall.

Thus, one should realize that sattvik guna is also a mode of maya, and all these sattvic siddhis are material powers.
Suggested Reading