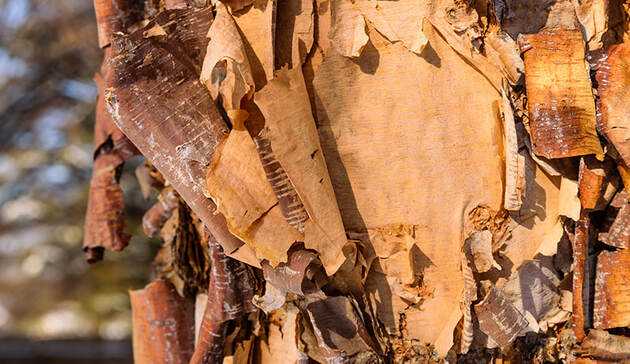 If one keeps peeling off the layers of the bark, the tree would eventually die. Still the tree does not do anything to protect itself and willingly continues to give its bark for the benefit of humankind and ultimately perishes.
“Saints are like a birch tree. They willingly undergo great discomfort and pain for the benefit of others.”

Saints are compared to a birch tree due to their nature of compassion and benevolence. The trunk of a birch tree is made up of multiple layers of bark. In ancient times, manuscripts used to be written on the bark of a birch tree. If one keeps peeling off the layers of the bark, the tree would eventually die. Still the tree does not do anything to protect itself and willingly continues to give its bark for the benefit of humankind and ultimately perishes.

Material beings inherently think only about their own benefit, while saints cannot think of anything other than the benefit of others. Despite undergoing criticism and insults, they continue to uplift the fallen souls.

In the mid 1900’s, there were genuine seekers of God, but they were misled by imposters. Analyzing the situation prevalent during those times, Shri Maharaj Ji identified the following problems -

1.     Teachings of contemporary saints were limited to maintaining harmony in the society. They did not pay any attention to the underlying reasons for conflict.

2.     Lots of pretentious pundits mis-led innocent people in the name of dharma by misinterpreting hymns and scriptural verses.

3.     Shri Maharaj Ji knew that our scriptures were full of seemingly contradictory philosophy, thus, studying the scriptures under the guidance of those who lack practical experience of God would not provide any clarity or deliver practical divine experiences. On the contrary, it would add to the confusion of the mind.

4.     He also realized that the only way for devotees to protect themselves from wrong associations (see Beware of Kusang), that could lead to a spiritual downfall, was by having a sound knowledge of philosophy and a firm resolve to follow the path of righteousness.

5.     The majority of so-called saints presented a very wrong concept of religion. In addition, they condemned the teachings of real saints.

6.     He also knew that He could not successfully accomplish His mission of Jeev-Kalyan (benediction of the public at large) until He would explicitly prove that the philosophy he was propagating, was irrefutable even by the top-most scholars.

Moved by the pitiable condition of the masses Shri Maharaj Ji was determined to provide them with true spiritual guidance. In one phrase, the reason for providing guidance was - His graceful nature. And in one sentence, the only purpose for revealing his divine knowledge as Jagadguruttam was - To make us pause-long-enough to listen to His words attentively to know the higher-purpose of life, beyond what the contemporary popular beliefs were.

Shri Maharaj devised this plan to ensure that people would be forced to take note and listen to his philosophy, which was backed by evidence from our scriptures as opposed to the religious practices prevalent at that time.

Shri Maharaj Ji hosted a summit in Chitrakoot in the year, 1955 wherein he invited 72 scholars from all over India and presented to them questions containing 12 sets of contradictory statements written in our scriptures. He urged the invitees to reconcile the contradiction with each set. When none of the invited scholars even attempted to clarify or reconcile the contradictions, Shri Maharaj Ji took it upon himself to do so. He answered those questions by speaking 3 hours per day for 12 consecutive days. His discourses attracted a large audience. He had gained everyone’s attention. This was disconcerting to the scholars, for this could lead to them losing their clientele and thus their livelihood. Moreover, it was a huge blow to their pride.

Realizing that one convention alone was not enough to get His message across, on the heels of the Chitrakoot convention, Shri Maharaj Ji conducted another convention in Kanpur in 1956.