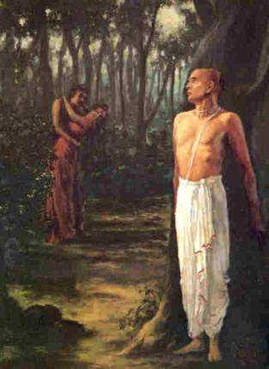 The Bhagawat Mahapuran narrates the story of Ajamil. Using portions of this story, many religious leaders decipher and propagate the message that "it is sufficient to chant the name of God to attain His abode. Having faith in God while chanting his names is not important".

Let us review this in deeper detail and reassess the message from this story.

Ajamil was an astute Brahmin with profound knowledge of the scriptures and a strong control over his senses. He was a house-holder and lived with his parents, wife and children. One day he saw a prostitute involved in conjugal love with someone. He got infatuated at this sight.

For the love of that women, he squandered all his money, lost his house, abandoned his family and finally went to stay with her. He lived with her for several years and had a few children with her. He was very attached to his youngest son ‘Narayan’. One day as the young Narayan was playing outside with his friends, he wandered away to a distance, where Ajamil could not see him anymore. 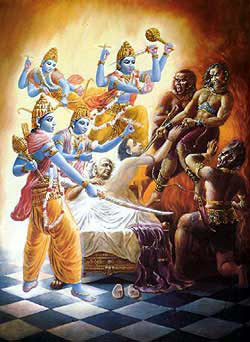 Ajamil panicked at not being able to see his son and started calling out his name Narayan to start looking for him. As he was calling out for Narayan, he had a vision. In that state, he felt that he was dead and messengers of Lord Vishnu called Vishnudoot and messengers of Yamraj, the God of death called Yamdoot appeared in front of him to take him to their respective abodes. The Yamdoots said that he needs to go with them to Yamlok (see narak), as he has spent his life lustfully living with a second woman. They presented the philosophy relevant to the three modes of Maya (Trigunatmak).

Vishnudoot on the other hand presented a different logic saying that he called out for the supreme Lord Narayan before his death, hence he should go with them to Baikunth. In the argument that ensued between Yamdoots and Vishnudoots, Ajamil recollected the entire philosophy of the scriptures and regained his scriptural knowledge.Once he regained consciousness, he realized how he had completely gone downhill, forgetting all about God and the knowledge of the scriptures and fell deep into the clutches of Maya.
​
He remembered how the practice of devotion to God, releases one from the cosmic bondage, while he, a great gyani, had fallen to such low levels in the pursuit of material pleasures.
अजामिलोऽप्पथाकर्ण्य दूतानां यम कृष्णयोः ।
धर्मं भागवतां शुद्धं त्रैविद्यं च गुणाश्रयम् ॥ भा. ६.२.२४
ajaamiloppathaakarny dootaanaan yam krshnayoh .
dharman bhaagavataan shuddhan traividyan ch gunaashrayam . bha. 6.2.24
Being full of remorse, for the bad choices he had made, he left that woman and children and left for the holy city of Hardwar to perform devotion to God.These verses of Bhagvat, clarify that Ajamil did not leave for the divine abode right after pronouncing the name of his son Narayan. Rather by the extreme grace of Shri Krishna,
न मे भक्तः प्रणश्यति
na me bhaktah pranashyati
God gave him a dream to awaken him. Ajamil renounced the world, went to Hardwar (bhag.6/2/39).There for a whole year he observed intense devotion towards Lord Krisha surviving solely on the water of the divine River Ganges.

Then after being free from Maya, he obtained a divine body and left for the divine abode in the divine plane (Pushpak Viman). This time Yamdoots did not come. 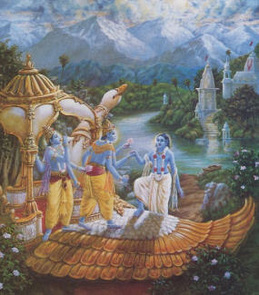 While doing devotion one has to engage the mind.
If you enjoyed this one, you might also like