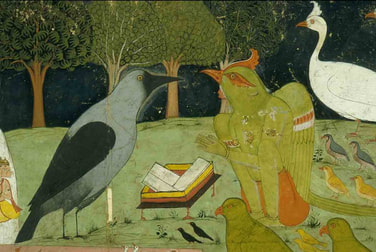 Kagbhushindi Preaching to Garud
Question: In Ramayan, Kagbhusandi tells Garud that “nonviolence is the greatest virtue”. Gita begins with Arjun not wanting to fight the war and massacre so many people. But Shri Krishna convinced him to fight. In that war billions of human lives were lost. I have read that the whole world was involved in the war. The fatalities were so high that only a few distant pockets of people remained after the war. God made the rule that nonviolence is a virtue. Then why does Shri Krishna, who is God Himself, not follow His own rule? 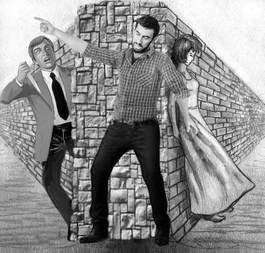 Under some circumstances "lying" could be virtuous
"Speak the Truth". It is a virtuous deed. But there are situations listed in the Vedas where lying is virtuous and speaking the truth is a sin. For example, consider this scenario; an innocent man is being chased by another one who wants to kill Him. The assailant asks a bystander,”did someone go running this way?”. In order to save the innocent person if the bystander lies and says "No, nobody went this way", it is considered to be a virtuous deed. On the other hand being truthful in this case would have been a sin.


At the end of Dwapar-yug (see Kaal-Time) demons were extremely tyrannic and used to find pleasure in torturing innocent people. Tired of all the sin on the earth Lord Shiv, Lord Bhahma and all devi-devatas pleaded to Shri Krishna to lighten the burden of this earth and save the innocent. Upon their request God descended on earth to put an end to evil and create a conducive environment for the general public to follow the path of righteousness. Lord Ram, said
अहिंंसा परमो धर्मः
ahiṃṃsā paramo dharmaḥ
“Nonviolence is the greatest virtue” and Lord Krishna practically did the same.

Kaurava brothers were greedy, unjust and selfish. Their allies were tyrants and evil. Deceitfully they coveted the entire kingdom of the Pandavas. Rule of Kauravas would be rule of tyrants, therefore it was imperative to hand the kingdom to the righteous Pandav brothers. Yet, Shri Krishna tried His best to convince the Kaurvas to return the kingdom of Pandavas or at least make a peaceful compromise. Kauravas were arrogant and adamant to continue their evil ways. So they deserved to be punished.

Even in the world the government punishes the miscreants to restore justice and peace. Letting miscreants walk out unpunished to wreak havoc is certainly injustice and it is encouragement of the demonic attitude. 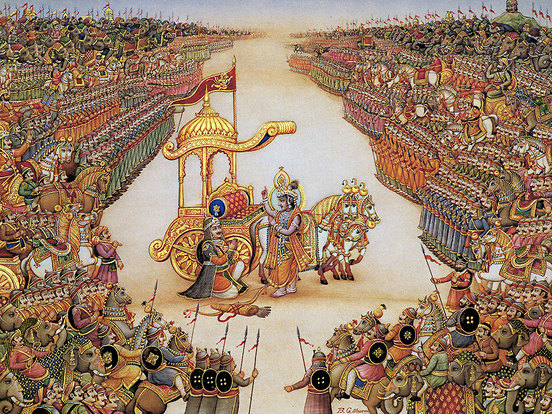 Armies of Kauravs and Pandavas
Don't you think it was a duty of Shri Krishna’s to stop demonic oppression of Kansa, other tyrannical kings and their helpers?

In this war, Duryodhan represented unrighteousness whereas Yudhishthir represented righteousness. On the battlefield, just before the war broke out, Yudhishthir gave one more chance to all warriors, on both sides, to pick their sides. He announced,”all who want to join my army are welcome and all who want to leave my army are free to join the other side”. This was a last chance to decide whether they wanted to be on the side of Dharma or Adharma.

Lord Krishna also said to Arjun,” all those, who are arrayed in other army, their time of death is near”.
मयैवैते निहताः पूर्वमेव निमित्तमात्रं भव सव्यसाचिन्॥ गीता ११.३३
mayā eva ete nihatāḥ pūrvam eva nimittamātraṃ bhava savyasācin॥ gītā 11.33
“I have already slayed them. O Arjun! You are a mere instrument”.
Please note: NO ONE dies until their predetermined moment of death and that moment is determined by God before the person's birth.

No doubt, in the battle of Mahabharat millions of people were killed. Shri Krishna clarified that only those whose time of death has already come and who are involved in unrighteous deeds will die.

Being a Mahapurush, Arjun already knew the eternal truths. He had descended on the earth to ask Shri Krishna questions about life, just like an ordinary person asks questions. Then Shri Krishna would provide the answers, clarify the doubts and in the process educate us on the facts of life and the behaviors to model.

Shri Krishna wanted to show mankind the advantages of leading a virtuous life. And also show the immense sufferings and defeat in all the spheres of life for not doing so. He did so via the life of Pandavas and Kauravas.
It is worth mentioning here and we should firmly believe

1.   "God is Omniscient". Being all-knowing He cannot err. The Vedas say –
यः सर्वज्ञः सर्वविद्यस्य ज्ञानमयं तपः ।
yaḥ sarvajñaḥ sarvavidyasya jñānamayaṃ tapaḥ ।
2.   "He does not have to earn or achieve anything, hence He can never be biased". The Ling Puran says –
आत्मप्रयोजनाभावे परानुग्रह एव हि ।
ātmaprayojanābhāve parānugraha eva hi ।
3.   "He descends only to deliver the world from unjustified stress."
यदा यदा हि धर्मस्य ग्लानिर्भवति भारत ।अभ्युत्थानमधर्मस्य तदात्मानंं सृजाम्यहम् ।
yadā yadā hi dharmasya glānirbhavati bhārata
।abhyutthānamadharmasya tadātmānaṃṃ sṛjāmyaham ।
There is one and only one reason for every action of God "welfare of mankind". Sometimes we comprehend His rationale for His actions and, since we are not all-knowing, at other times it escapes our comprehension. This understanding will never create any doubt in future.