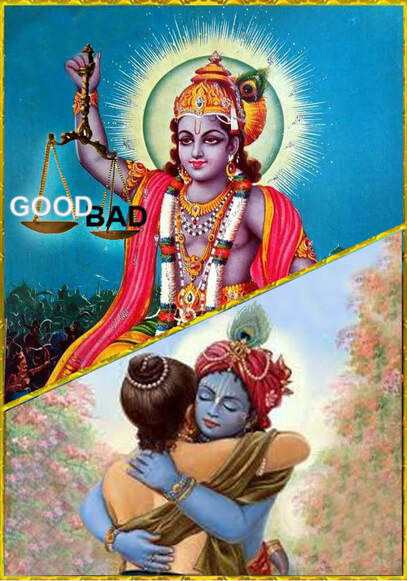 1. He is The Supreme Impartial Judge, who awards fruits for every action of human beings.
2. He forgives sins of His devotees.

Even though God-realized saints also validate both of these concepts, it creates doubt about His authenticity as a judge. Our logic says, since He favors His devotees He cannot be called Impartial.

Let us resolve it.

1. God is totally impartial: Both good and bad actions increase the karmic bondage. Sins result in afflictions in Narak. Reward of virtuous deeds is celestial but transient luxury after which the jeev is hurled to the lower species of life. God Himself witnesses every action and gives the befitting recompense for the good and bad actions performed by human beings. Neither does he assign this work to His Swansh (other avatars), nor to His most preferred devotees (the genuine saints).

2. God is embodiment of grace: God pardons all the sins and virtuous deeds of His devotees thus acquitting them from bearing their consequences. Along with all that, He graces them with everlasting, ever-increasing, and ever-new divine bliss.
यान्ति देवव्रता देवान् पितृन् यान्ति पितृव्रताः । भूतानि यान्ति भूतेज्या, यान्ति मद्याजिनोऽपि माम् ॥
yānti devavratā devān pitṛn yānti pitṛvratāḥ । bhūtāni yānti bhūtejyā, yānti madyājino'pi mām ॥
“Those who love the celestial gods, attain their abode. The adorers of ancestors go where the ancestors are, and those who love mortal beings are sent where their object of affection is.”

In the Vedas there are some bylaws for this rule, which are applicable only if certain conditions are met. Shri Krishna clearly says –
सर्वधर्मान् परित्यज्य मामेकं शरणं ब्रज । अहं त्वां सर्वपापेभ्यो मोक्षयिष्यामि मा शुचः ॥ गीता १८.६६
sarvadharmān parityajya māmekaṃ śaraṇaṃ braja । ahaṃ tvāṃ sarvapāpebhyo mokṣayiṣyāmi mā śucaḥ ॥ gītā 18.66
“Abandon all attachments of the world and surrender completely unto Me alone, I will absolve you from all the recompenses of your good and bad actions”. This rule applies exclusively to those who are completely surrendered to God.

There is a secret behind this law. Mind is the sole doer. Sense organs cannot function without being directed by the mind. When the mind is totally absorbed in God one cannot perform any physical action. It is then and only then that Protector God takes care of everything for such a devotee. In such a state, if one is seen performing any action, then all those actions are the actions of God. Because now God has become the governor of the devotee’s mind. For instance, even though soldiers are seen killing enemy soldiers, they are following orders of their captain. Hence, soldiers are not only excused from the punishment for murder, they might be awarded for their heroic actions. That’s why in Bhagavat Gita, Lord Krishna repeatedly used the word ‘Only’ (एव एकं अनन्य). It clarifies, “If your mind is surrendered ONLY to Me, I will take full care of you and provide whatever you need or wish.”

So, His grace is a bylaw to the Law of Karma and God arbitrates according to His Laws.  If someone wants to attain the same grace of God then they should surrender unto Him. He will impart His grace without any discrimination. He is the embodiment of mercy. That is why He added –
अहं त्वां सर्वपापेभ्यो मोक्षयिष्यामि मा शुचः ॥
ahaṃ tvāṃ sarvapāpebhyo mokṣayiṣyāmi mā śucaḥ
“Don’t worry about innumerable sins you have committed in this life and previous lives. Upon complete surrender I will absolve you from all the sins”. It is a universal law of God.

An action, without attachment of mind is called non-action (अकर्म). Therefore those actions don't attract any award or punishment.

So, God alone is The Impartial Arbitrator. If it were not for Him, who could possibly keep track of innumerable actions of innumerable lives of innumerable living beings, living in innumerable brahmand (cosmic eggs) ! He is Almighty, Omnipresent and Omniscient.  He is the real father and a real well -wisher of all the living beings. In His scriptures He has disclosed the various goals and the paths (see karm, gyan, yog and bhakti) to attain those goals. Also, He has given his children full freedom to pursue any of those goals according to their own understanding and interest to seek appropriate rewards. We cannot accuse God for the outcomes of our own actions, which we whimsically perform while ignoring the orders and instructions of scriptures and saints.