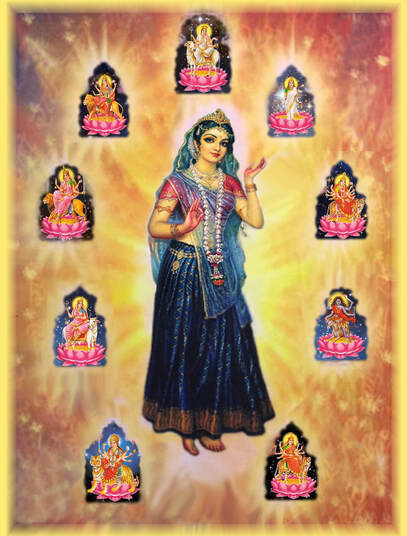 Different forms of Divine Mother Shri Radha Rani
The auspicious occasion of Durga-Pooja is just around the corner. Many of us are enthusiastically making various preparations to celebrate this great festival with great fervor.

Mother Durga is known as the bliss potency (Hladini Shakti) of Lord Shankar. There are 9 Divine forms of the Supreme Shakti of Lord Shankar. Each of them is endowed with special powers and traits. The nine manifestations of Mother Durga together, are called NAV-DURGA. Many families have a tradition  to observe Durga Pooja by worshiping 1 form of Mother Durga per night, over the course of 9 nights thereby the name Navratri (nav = 9, ratri = night). The 9 forms of Durga are -
1. Shailputri,    2. Brahmcharini,    3. ChandraGhanta,    4. Skandmata,     5. Kushmanda,
6. Katyayini,    7. Kalratri,    8. Mahagauri, and    9. Siddhidatri.

The leads us to a question “Who is Durga” and “why should we worship Her”?

This question has been summarized by Shri Maharaj Ji in one simple sentence - "Mother Durga is none different from Lord Shankar, endowed with all the powers of Lord Shankar.”

​Just like Bhagavan (masculine form of Supreme God) has many forms, Bhagavati (feminine form of the Supreme God) also has many forms. One of those forms is Durga. Mother Durga descended in various forms during different times to kill demons like Madhu and Kaitabha, Shumbha Nishumbha, Raktabeej and many others.
Our scriptures tell us stories of when Mother Durga killed demons, which even Lord Shankar and Lord Vishnu were unable to kill. Then how is Jagadguruttam Swami Shri Kripalu Ji Maharaj's (Shri Maharaj Ji's) statement “Mother Durga is endowed with all the powers of Lord Shankar” correct?

​Let us visit the story and the backstory of one of those leelas and review the relevant divine concepts behind this leela to understand Shri Maharaj Ji’s statement. ​​​​

Point to Ponder If somebody were to fight for 10,000 years how many years did that person live?

Remember, in Satyuga life span of human beings was thousands of years. In Kaliyuga, life expectancy is at most 100 years. Few people live past that age.
So the story goes as follows - upon advice from Mother Bhagavati, Lord Vishnu devised a trick to destroy the two demons. Lord Vishnu praised the battle tactics of the two demons. He told them that He is pleased with their valor and told them to ask for a boon. The boastful demons, proud of their victories over Lord Vishnu, said that they were willing to grant Him boons instead. Lord Vishnu cleverly asked Madhu and Kaitabha for their lives. And thus, with the help of Mother Bhagavati these demons were killed.

It is well known to us that Shri Krishna is the Supreme God. The Vedas say -
All other forms of God are the revelation of one or some particular powers of God. In other words, the masculine forms of God viz; Brahma, Vishnu, Shankar, Ram etc are Avatars (descension) and Shri Krishna is called Avatari which means the origin of all the Avatars. All the Avatars attain their respective divine powers from Shri Krishna. And all these descensions are governors of the power of Yogmaya.

Just like Lord Brahma, Lord Vishnu, and Lord Shankar emanate from Shri Krishna, Mother Brahmani, Mother Lakshmi, and Mother Parvati emanate from the left-side of Shri Radha Rani. ​  ​These Goddesses are the bliss potency (Hladini Shakti) of the masculine forms of God.
​Furthermore, for the purposes of leela, Goddess Durga and Her other forms emanated from Mother Parvati. Therefore, Uma, Durga, Kali are all swansh of Shri Radha. They too are not part of Jeev category. Instead They are God Themselves.
​All descensions of God happen for a particular reason. In each descension the powers exhibited are specifically required to accomplish the specific task. Just like you don't need a nuclear bomb to kill a mosquito and bare hands are enough to kill them. Similarly, every descension does not need all the powers, so powers not needed in that avatar continue to stay dormant.

It is important to understand here, as Srimad Bhagavat states that first descension called Prathama Puruṣa​ (प्रथम पुरुष​) Karaṇārṇavadaśayī Mahāviṣṇu is the manifestation of a single expertise (कला) of Shri Krishna.  (1)
All others powers stay dormant in Mahāviṣṇu. The same is true for all other descensions. Shri Ram in Tretayuga descended with 12 expertise and Shri Krishna in Dwaparyuga descended with 16 expertise. But it does not mean Shri Ram was less powerful than Shri Krishna.
Let's also not forget that Shri Krishna is Brahma-Supreme God. He has uncountable powers. That is why Shri Krishna cannot be fully understood or described. Also, each of His powers is limitless and they cannot be measured. Mother Kali is a divine power, so it should be no surprise that She too cannot be fully understood by anyone. So, the words in Markandeya Purana, though correct, ought not be taken to mean that one form of God is superior to the other. This type of comparison is termed as Namaparadh (2).

Some people might continue to worship all the forms of Goddess Durga to keep the family-tradition alive. Others might continue these ritualist prayers due to the fear “if I don't worship these Goddesses then They will get angry as a result some ill will befall on me or my family”.

Consider this, if there is a child whose mother is the superintendent of police, does the child think “I have to love the person in the uniform and also the one at home”? No, the child knows that his mother is the same person as is in the office and home and loves to spend time with his mother at home. Similarly, all Goddesses are one and the same; which means if you love any one of Them then you have loved Them all. It is up to us to whole-heartedly believe it and practice it. (3) 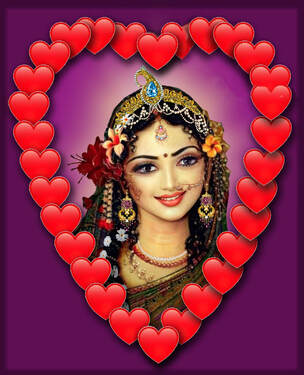 Our Loving Mother Radha Rani
So, instead of worshipping a ferocious form of Goddess or having many forms of Goddesses on your altar, always worship the most loving and gracious form, namely Shri Radha. It is wise to speed up your devotion of loving the Divine mother. Too many options confuse the mind, thus devotion slows down. Therefore, do not even keep the photos or idols of various forms of God and Goddesses. Exclusive devotion to one particular form of God accelerates the speed of devotion.

​Also thinking analytically, when all of Them are one and the same, then what would be the reason to worship multiple forms? Please be certain that Durga, Kali, Lakshmi, Parvati, all Goddesses are an inseparable part of Shri Radha with different modes and pastimes.

So, on the upcoming Durga Pooja, cast away your inhibitions and wholeheartedly love only the loving form of mother Durga which is Shri Radha Rani. Exclusive devotion to Shri Radha along with Shri Krishna as your beloved, will qualify you for the highest bliss of Maharas ​(4). ​
If you enjoyed this one, you might also enjoy