God adored Raidas, a shoe-maker, even though he worked with animal hides
Four paths have been described in the Vedas as a means to realize God, along with the respective results or fruits of following that path

स​र्वं मद्भक्तियोगेन मद्भक्तो लभतेञ्जसा । स्वर्गापवर्गं मद्धाम कथंचिद् यदि वांछति ॥
sa​rvaṃ madbhaktiyogena madbhakto labhateṃjasā । svargāpavargaṃ maddhāma kathaṃcid yadi vāṃchati ॥
"The devotees of The Supreme Lord attain the rewards of following the path of Karm, Gyan, Yoga and any other foreseeable means". After attaining Divine love bliss, the devotee rejects all other achievements and remains thoroughly absorbed in the ecstasy of the Ocean of the nectar of love. Yet, Lord Krishna says,
One cannot attract Shri Krishna even if one were to perfectly implement all the aforementioned measures. He accepts only those who renounce all other desires and surrender unto Him alone. surrender unto Him means engaging one’s mind in loving thoughts of Shri Krishna, His names, His forms, His pastime, His attributes, His abodes and His fully-surrendered devotees. Once a devotee fully surrenders to Him, He ignores all their sinful past actions.
अपि चेत्सुदुराचारो भजते मामनन्यभाक् । साधुरेव स मन्तव्यः, सम्यक् व्यवसितो हि सः ॥ गीता ९.३०
api cetsudurācāro bhajate māmananyabhāk । sādhureva sa mantavyaḥ, samyak vyavasito hi saḥ ॥ gītā 9.30
“I don’t pay any attention to the physical actions performed by those, whose minds remain completed absorbed in my thoughts alone.” But
कर्मेन्द्रियाणि संयम्य य आस्ते मनसा स्मरन् । इन्द्रियर्थान्विमूढात्मा मिथ्याचारः स उच्यते ॥ गीता ३.६
karmendriyāṇi saṃyamya ya āste manasā smaran । indriyarthānvimūḍhātmā mithyācāraḥ sa ucyate ॥ gītā 3.6
“I am unimpressed by those who exhibit outward control of their senses, yet their mind remains engrossed in material matters. His physical actions of worship and simplicity are worthless to Me”.

​History is full of such examples. Let us examine a few of them 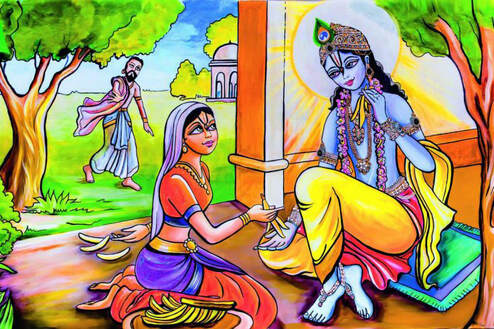 In a love-trance Vidurani threw away flesh of bananas and offered banana peels to Shri Krishna
Arjun killed millions in the Kaurava army, yet Shri Krishna ignored all his gruesome actions. Shri Krishna only observes the action performed by the mind and Arjun’s mind was totally absorbed in loving thoughts of Shri Krishna.

Hanuman Ji killed millions of Brahmins in Sri Lanka, yet Lord Rama did not chastise him. Instead, he was rewarded for his service to the Lord.

Duryodhan prepared a variety of scrumptious food for Shri Krishna but Shri Krishna rejected that food in favor of the love-filled banana peels offered by Vidurani.

Lord Ram descended for establishing righteousness in this world. Yet, the actions of His brother Bharat towards his mother Kaikeyi were highly deplorable. Upon return to Ayodhya, when Bharat learnt that his mother was responsible for sending Shri Rama to 14 years exile, he became infuriated with his mother and said to her:
न सर्वे भ्रातरस्तात भवन्ति भरतोपमाः । मद्विधा वा पितुः पुत्राः सुहृदो वा भवद्विधाः ॥ रामायण​
“Bharat is the most dear to me”. 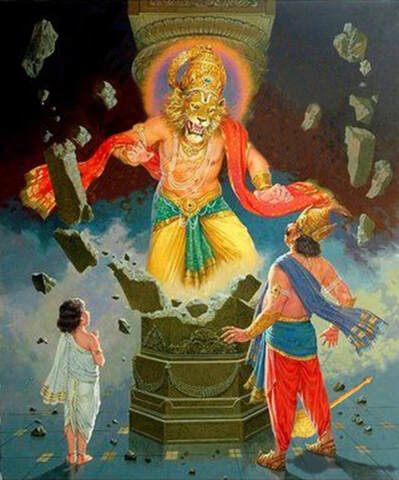 Prahalad defied his father and continued to love God
"One should respect one’s father like God”. Prahlad totally disregarded this principle of the Vedas and disobeyed his father Hiranyakashipu orders. He continued to love God wholeheartedly, sang His glories and taught about Him to other children. Infuriated by the disobedience Hiranyakashipu ordered Prahlad to be killed. When all soldiers failed to kill Prahlad, he himself decided to kill his own son. God loves His devotees so much that without being invited, God descended on this Earth as Lord Narasingh to kill Hiranyakashipu and save Prahlad.

When Lord Vaman in the guise of a young ascetic, asked Raja Bali for three steps of land, Raja Bali’s preceptor, Shukracharya, cautioned him against giving the three steps of land in alms to the young ascetic. Bali disobeyed his preceptor, an unpardonable offense per the rules of the Vedas, yet Bali was rewarded with the attainment of divine grace.

​Although milk maidens of the land of Braj, referred to as Gopis, were married, they did not care about their marital status and loved Shri Krishna wholeheartedly.They offered their mind, body and soul in the service of Shri Krishna.
Bhakti means complete surrender, which signifies submission of the mind and the intellect. God so loves the completely surrendered souls that he bestows His own knowledge and bliss upon them thus making them equal to Himself
जानत तुमहिं तुमहिं ह्वै जाई ॥
jānata tumahiṃ tumahiṃ hvai jāī ॥
It is proven that bhakti (love) is the only means to achieve the ultimate goal of life - attainment of unlimited, unending and ever increasing divine love bliss. God loves “love” so much that He remains forever under the control of His devotees who love Him wholeheartedly.