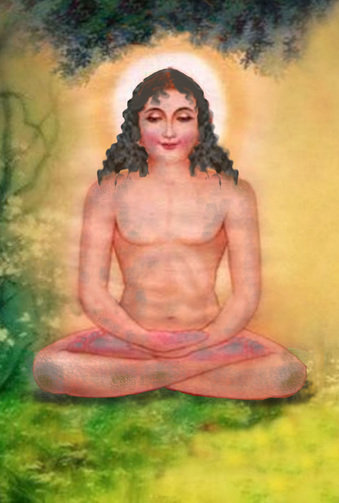 Lord Rishabh Dev
Consequently, a saint does not have to bear the fruits of his actions, as he is a non-doer. But history is full of numerous examples of saints who are seen as performing material duties;

1.   Arjuna killed thousands of Kauravas, in the battle of Mahabharata (1), yet, those actions were not recorded as sins.

2.   Prahlad, who was a God realized saint is known to have performed the last rites of his father, a demon by the name of Hiranyakashipu.

3.   The milk-maidens of Braj (Gopis), who are the examples of the highest class of devotees and whose mind is constantly attached to Lord Krishna, continued to perform all their household duties.

4.   King Janak, the great Karmyogi, ruled his kingdom for thousands of years.

5.   Similarly, Ambarish and Dhruv judiciously ruled their respective kingdoms for hundreds of thousands of years.

We also read about saints who seem to have performed actions that are in violation of the rules prescribed in the Vedas:

1.  Jagadguru  Shankaracharya performed the last rites of His mother, whereas per the Vedic rules a sanyasi is forbidden to use fire.

2.  Rishabh Dev is an example of a Karm Sanyasi. After handing over his kingdom to his sons, he did not follow any Vedic rules. He wandered from one place to the other, with unkempt hair and his body covered with excreta instead of clothes but his mind was constantly affixed on God.

In the eyes of the world, some of these well known saints were seen performing good actions whereas others seem to have been performing bad actions. But in the eyes of God, they did not perform any action as they were constantly immersed in the sweet remembrance of God. God was the governor of their minds. It was God, who performed various actions through them for the welfare of His devotees or to set an ideal.

Shri Krishna said in the Gita,
Arjun, there is nothing in the three worlds that I am prescribed to do, nor is there anything that I wish to attain and cannot; yet I engage Myself in action! Because I wish to set an example. 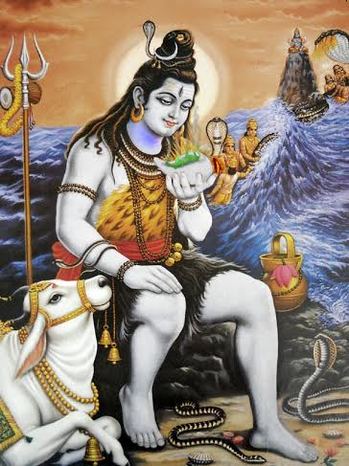 Shiva Drinks Poison that Emerged from Churning of Milk Ocean
For example Lord Shiva drank the most potent poison, which emerged from the churning of the milk ocean, and held it in His throat. The rest of His body retained the light complexion, but that poison made His throat turn blue. Hence, another name of Lord Shiva is Neelkanth meaning, the one with a blue throat. Mimicking this action, if we were to consume a pinch of arsenic, only one attempt will be enough to put an end to this body.

Another point to note is that, it is impossible to comprehend divine actions, with a material intellect. Any attempt to do so could cause utter downfall. It happened:

1. When Goddess Parvati saw Lord Ram wailing for Mother Sita, She doubted His Godliness. She thought,"God is Omniscient and yet He does not know the whereabouts of Sita Ji. She thought, that my husband Lord Shankar is Omniscient and He bowed down to Lord Ram and addressed Him as the Supreme God. How can Lord Shiva be wrong". Such doubts bewildered Her. Eventually she assumed the form of Sita Ji to test Lord Ram. Lord Ram, being Omniscient, recognized Her real identify and called her out. 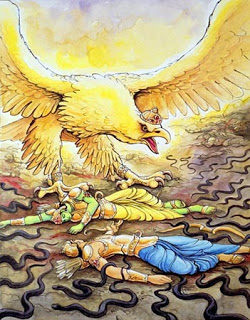 Garuda freeing Ram and Laxman From the Snare of Poisonous Snakes
2. When Garuda was called to release Lord Ram from the snare of poisonous snakes, Garuda doubted His Divinity as Brahma-Supreme God thinking,"I thought He is the One, whose name alone is enough to release anyone from the clutches of Maya!! And He can't free himself from these snakes and had to call me for help!" This doubt clouded Garuda's mind. Eventually, a great saint Kag Bhushundi graced him by giving him constant satsang, after which Garuda got peace of mind.

3. Also, King Pareekshit was unable to comprehend the amorous pastimes of the Gopis of Braj with Lord Shri Krishna. He kept casting aspersions on the character of the Gopis wondering, how could they attain Golok and was reprimanded on multiple occasions by Shukdev Ji Maharaj, while He was narrating the Shrimad Bhagwat Mahapuran to Pareekshit.

These instances teach us never to use our material mind to try to comprehend the incomprehensible pastimes of divine personalities. We must have a firm faith that Divine personalities are Almighty and Omniscient. The sole purpose behind their actions is the welfare of their devotees.