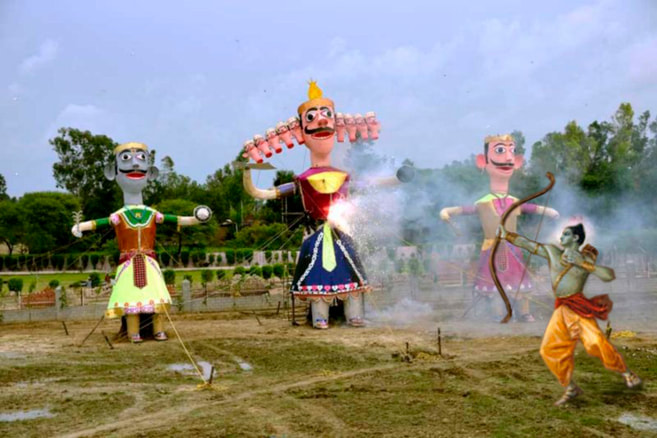 Triumph Of Lord Rama Over Ravana

One of the popular Hindu festivals, Dussehra is celebrated with pomp and gaiety on the 10th day of waxing moon (shukla paksh) of Ashvin month of the Indian luni-solar calendar.

The celebration of Dussehra is rooted in the Hindu epic of Ramayana. Lord Rama, the eight incarnation of Lord Vishnu descended on earth in Treta yug. Per the wish of His step-mother Kaikeyi He accepted exile of 14 years. Lord Ram's wife Mother Sita and younger brother Lakshman followed Him to the forest. While, they were roaming around in the forest, Ravan, the mighty demon-king of Lanka, abducted Mother Sita. Lord Rama, along with his brother Lakshmana assembled an army of monkeys and bears. Together they reached Lanka in order to defeat Ravana and rescue Mother Sita.

On this day Lord Rama killed the ten-headed demon Ravana with the help of his fellow beings. To this day, the day is celebrated to commemorate the victory of Rama over ten headed Ravana. That’s why it is called Vijaydashami (vijay - victory on dasmi-10th day) or Dasha-hara which means end of(hara) of ten(dash) headed Ravana.

Over the years somehow the name of the festival has become "Dusshera". Unlike, the original name this word does not have any meaning.
On this day people worship Lord Ram, distribute lots of Prasad. Besides that the main attraction of the day is burning of effigy of Ravan. A massive fair is arranged where lots of people get together to enjoy variety of food, clothes, toys and cultural programs.

For 10 days leading up to this day Shri Ram's pastimes are enacted on a big stage in public areas. Traditionally, these Ram leela performances is most prominent in the states of Delhi, Himachal Pradesh, Uttar Pradesh, Mysore and Orissa. These enactments start with before birth of Lord Ram and cover the leelas upto killing of Ravana. The grand finale is burning of effigy which takes place on the main day of Dashahara.

This story enactment is an ancient Indian way of not only recalling the pastimes of Lord Ram but also passing on the knowledge to the children about Lord Shri Ram and festival of Dash-hara in a fun and easy to learn manner.

Many people read Ramayan every day for ten days finishing on Dashahara.

The best way to enjoy this festival is to
1. chant the name of Shri Ram (1) or read Ramayan to remember Him,
2. decorate home with glimpses of pastimes of Shri Ram.

In other words, do anything, which increases your devotion.

This is the only purpose of celebrating Dashhara and every other religious festival.
<- Religious Festivals (When, What, Why)
If you enjoyed this one, you might also like