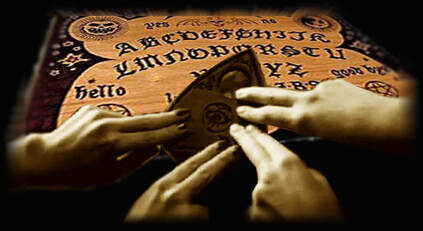 Some try to invoke the souls of people who have departed the earth.
Numerous people want to speak with the dead. There can be multitude of reasons for them to do such a naive act. Speaking with their deceased near or dear ones, in their quest to know their own future or get through a difficult situation in their life they turn to these middlemen or agents who practice séance, Ouija, or planchet.

Knowing that people are interested in calling departed souls, many people claim to be equipped with the skills to invoke the dead. These swindlers go so far as to claim that they can even summon God and His saints. 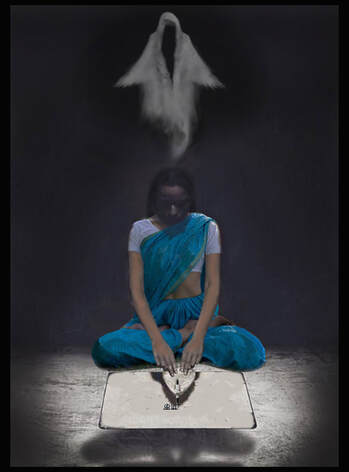 A girl summoning departed soul
I would like to share a small excerpt from Shri Maharaj Ji’s life when He was young and lived in Pratapgarh with a devotee, Shri Mahabani Ji. In the same neighborhood two young girls used to call souls on a planchet - a heart shaped wood piece. This device was equipped with  a pencil and the soul called in would write answers on a paper. People used to flock there to talk to departed family members and friends. Sometimes people wanted to talk to divine personalities like Lord Hanuman or Mother Durga to find solutions to family, wealth, health and other problems. The girls would call upon, whoever the people wanted to speak to.

These girls were friends with Mahabani Ji’s daughter Usha Ji. One day with great excitement, she shared with Shri Maharaj Ji that her friends possess this unique gift of speaking to departed souls. Shri Maharaj Ji brushed aside the conversation and called it a hoax.

To prove that her friends were truly capable of invoking souls, she asked them to come and demonstrate in front of Shri Maharaj Ji. To show off their prowess that day the girls invited Lord Hanuman. Shri Maharaj Ji continued to watch this drama unfold in silence for a bit before deciding to reveal the fallacy. Shri Maharaj Ji asked “Lord Hanuman”, to answer a simple question related to Sanskrit grammar. 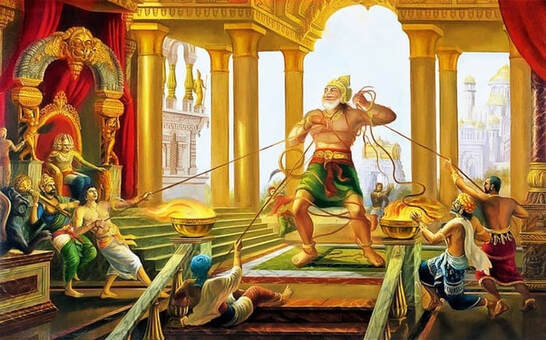 Lord Hanuman in Ravana's assembly
Instead of answering the question, the soul answered, “I will not answer the question”. Shri Maharaj Ji laughed out loud and asked the girls to ask the soul “why won’t He answer?”. The soul replied, “I am scared of the person sitting on the ‘palang’ (bed).” Then Shri Maharaj Ji asked to write “Why? Am I a ‘Hauaa’ (a fictitious scary entity)?”.

In response the so-called “Hanuman Ji'' left the planchet!

Thus, every wise person needs to reflect on the following points: 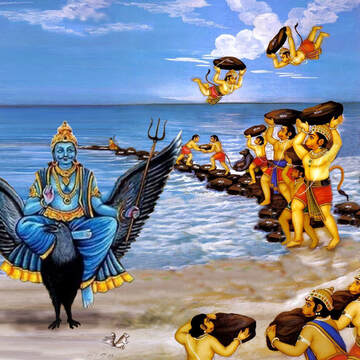 This happened at the same time when Lord Ram, with the help of an army of vaanars (monkeys), was building a bridge to cross over the mighty ocean to reach Lanka to defeat Ravana, and free mother Sita. To assist with the building of the bridge, Lord Hanuman had to transport large rocks and trees on his head. As Shani was situated on Lord Hanuman’s head, he got repeatedly crushed under the weight of the heavy rocks and trees that Lord Hanuman carried. He begged Lord Hanuman to let him go and promised Him that he will forever stay away from Lord Hanuman and His devotees.

Hanuman Ji is called Sankat mochan. To date, at the beginning of every ritualistic prayer, Hanuman Ji is invited to protect against evil forces. In other words, when humans are scared of the influence / glance of Shani and seek protection from Hanuman Ji, isn’t it naive to believe that Lord Hanuman who has no time to spare for Shani would leave the service of his dear Lord to provide answers to the material problems of ordinary mortal beings! And worse still be scared of Shri Maharaj Ji!

Then who is posing to be Hanuman Ji?

Shri Maharaj Ji explained the philosophy behind “talking to souls”. He said one can invite souls endowed with lower spiritual power than the one who invokes them. No one can invite a soul with a power higher than themselves. If that were possible then why can’t everyone call God?

Aspirants engage in a constant practice to love God. When their love attains perfection, they attain God realization, that is when God bestows all His divine powers to them and makes them equivalent to Himself. 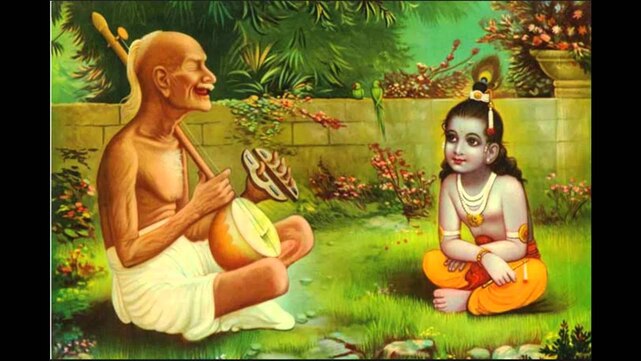 Shri Krishna listening to Soordas's songs
“Those who know You become like You”.

Only then the devotee can call God and God, being bound by his eternal promise to His devotees, has to come upon the devotee’s invitation.

There are many souls which roam around without sthool sharir (gross material body). This is the worst state that a soul can be in. Hence, when someone invokes them, they gladly come. When asked questions they give answers based on their own perceptions, knowledge and understanding. Just like humans don’t know everything, these wandering souls also don't know everything. Yet, their desire to receive respect, inspire them to pretend to be some great soul and enjoy the momentary glory / worship that is being bestowed on them. Some of the souls are evil too and bring harm upon the people present..


Worship the Supreme Lord with any of the four bhav (sentiments of love) and do not be fooled by those who do planchet or practice any form of malefic arts! When you are under the shelter and protection of the Supreme Lord, you do not need to engage with and be afraid of any malefic artists.
Love our Publications!!