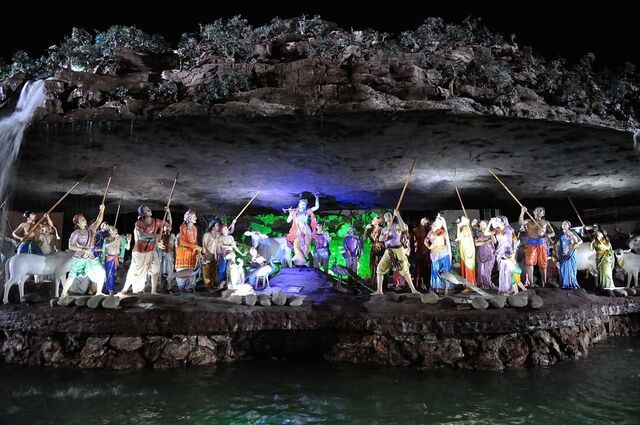 Govardhan Leela portrayed in Prem Mandir Vrindaban
Seeing the cowherd men busily arranging for a fire-sacrifice (यज्ञ​) to Indra, Lord Krishna humbly inquired from the elders, headed by His father, Nand Maharaj, the reason for all these rituals. Nand Maharaj explained that the great demi-god Indra is the controller of the rain. Rain clouds provide rainwater, which gives happiness and sustenance to all creatures. Krishna's said, "Our home is not in the cities or towns or villages. Being forest dwellers, we always live in the forest and on the hills. We should worship Govardhan Hill, since it provides fodder for our cattle and they are the source of income".

Lord Krishna wanted to teach the inhabitants of Braj, called brajwasi, a vital lesson to stop worshiping celestial gods (देवी-देवता) and worship only Brahma - Supreme God, who is the Ocean of Bliss. Doing so automatically appeases all other gods and goddesses. But the reverse is not true. 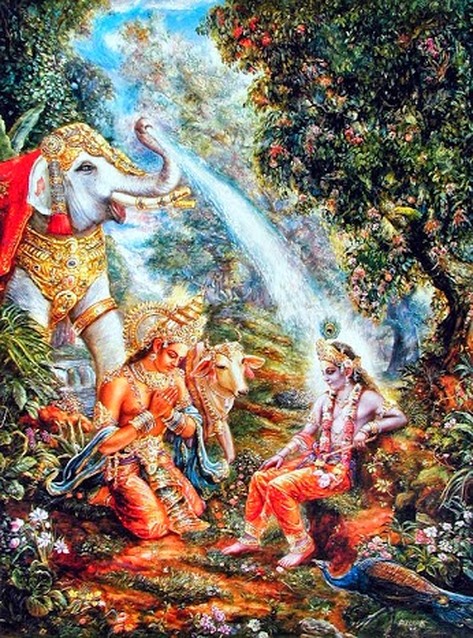 Indra worshiping Shri Krishna
Jeev wants ever-lasting, ever-increasing, ever-new divine bliss. These celestial beings are material beings and possess great, yet limited, material powers. They can give no more than what they have. Hence, the goal of human life cannot be attained by worshiping celestial beings. To attain the ultimate goal of human life one will have to worship the Supreme God. In other words He wanted to impart the lesson of exclusive devotion to the Brahma - Supreme God.  Lord Krishna is that Lord.

When Indra realized that his sacrifice had been abandoned, he was furious with Nand Maharaj and the other cowherd men. He felt Shri Krishna has beguiled them and they have accepted Shri Krishna as their Lord. Angry Indra sent forth Sanvartak clouds which cause universal destruction. He followed the rain clouds riding on his elephant Airavata and taking with him the swift and powerful wind-god to decimate the cowherd village of Nand Maharaj. Propelled by the fearsome wind-god, the clouds blazed with lightning bolts and roared with thunder as they hurled down hailstones. As the clouds released torrents of rain, as thick as massive columns, the land of Braj was submerged in the flood. The cows and other animals, shivering from the excessive rain and wind, and the cowherd men and women, pained by the cold, all approached Krishna for shelter.

The Supreme Lord Hari understood that this was the work of angry Indra. He saw the inhabitants of His Gokul rendered practically unconscious by the onslaught of hail and blasting wind. Shri Krishna said I have taken a vow to protect My devotees. Saying so He playfully picked up Govardhan Hill on the tip of the nail of His little finger of His left hand and held it aloft. All brajwasis walked beneath the hill, where they found ample room for themselves and all their cows, wagons, and for all other members of the community as well. Lord Krishna stood there holding up the hill for seven days as the people of Braj fixated their gaze upon Him. No one felt hungry or thirsty and had no consideration of personal pleasure.

Indra was baffled seeing this illusion. But then Indra realized this little boy is not merely a boy, who nullified all the mighty efforts of annihilating the land of Braj. Oh! He is Brahma - Supreme God!! Then he stopped rains and came to Lord Krishna to beg for forgiveness. He bathed Shri Kirshna with the water fetched in the trunk of his celestial elephant, Airavat, and offered a long Vedic homage to please Shri Krishna. Lord Krishna pardoned him instructed to never again be blinded by pride. Indra said, “I was so intoxicated in my limited powers, that I forgot about You, who is the power behind my powers. You opened my eyes today by shattering my false ego.”

So the other reason of this pastime was to teach us to be free of false ego.

Once the rains stopped, all cowherd men, women, children started dancing in ecstasy saying “Krishna Kanhaiya Lal Ki – Jai” (All glories to Shri Krishna). They adored the Govardhan Mountain and offered Him all the food made for worshiping Indra. Lord Krishna Himself appeared in a gigantic form of Govardhan and ate everything.
<- Religious Festivals (When, What, Why)