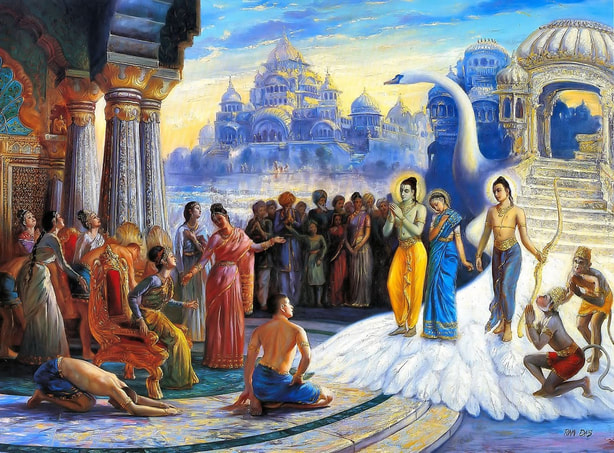 Diwali or Deepawali is the auspicious day, when Lord Shri Ram came back to Ayodhya after 14 years of exile. Diwali falls on the day of 'Amavasyaa', the no-moon night and there is darkness all around.

The inhabitants of Ayodhya were dead without Shri Ram. They had no enthusiasm of doing anything. Their hearts were full of darkness. The news of Shri Ram’s arrival brought back life in them again. Consequently the entire Ayodhya, which was dormant for 14 years became zealous and extremely active. Their darkened hearts got a new light for ever. They started repairing and painting their dirty houses in honor of the king of their hearts and region. They decorated their house with so many clay lamps, the whole city was shimmering with light. They lighted so many fireworks that it seems as if from earth to sky every one was overjoyed.

Diwali always comes with a series of festivals. Because after the arrival of Shri Ram each and every moment of the day was a festival in itself. as  a matter of fact, it went on for months.

The celebration of the five-day long festival, Diwali, begins on Aswayuja Bahula Chaturdashi and concludes on Kartika Shudha Vijaya.
For those of us who are practicing devotion under the guardianship of Shri Maharaj Ji This day is even more important since this is the day of descension of our Divine Mother our beloved Amma, wife of Shri Maharaj Ji.

Watch this video to get a glimpse of the divine personality of Ammaji watch the video below starting at 00:30:55
<- Religious Festivals (When, What, Why)