SHRI KRIPALU KUNJ ASHRAM
<- Religious Festivals (When, What, Why) 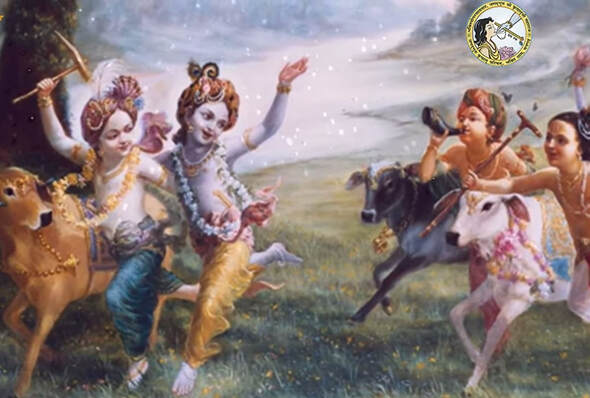 Shri Krishna frolicking with his friends in the forests of Braj
Lord Sri Krishna descended as the son of mother Devaki and father Vasudev in a prison in Mathura. He descended in a jail for Kansa, cruel brother of Devaki, had imprisoned both of them. On a dark stormy night, Shri Krishna appeared in the jail in his divine form which He has four arms and holds conch, disc, mace and lotus flower in those hands. Devaki and Vasudev offered their obeisance to God and then requested Him to become a baby. Also, they wished to forget that He was God.
​
Then Shri Krishna inspired His father, Vasudev, to carry Him to Nand Baba and Yashoda Maiya's house in Gokul.

Krishna spent his childhood days in the home of his foster parents in the village of Gokul. Nand Baba was the chieftain of the village and was a cowherd by profession. He had 900,000 cows. As was customary in those days, at a very young age little boys were initiated in the profession of their fathers. On the day of Gopashtami after his fifth birthday, Krishna was initiated as a cowherd.

As a cowherd boy, His duty was to take the cattle for grazing to green pastures in the wilderness and steer them back home at dusk. Even though He was initiated in this profession, being a little boy of 5, He was not old enough to steer the cattle. Once in a while, He would perform His designated duty and rest of the time He used to go to the forest to enjoy playing with His older friends. His friends used to take care of their own cattle and Shri Krishna's cattle. This continued for a couple of years. Today, after the same ceremony was performed for the third time after his 7th Birthday, he went to the forest with His friends to graze the cows. However for some reason today, He was in a mood to pick up a fight with his friends.

When His turn came, to steer the cattle, He started making excuses to instigate His friends to pick up a fight with Him. One of His friends charged back saying.. "O Kanhaiya! don't you dare frown at me! With the arrangement that we have, your turn comes, only once in a while. If you don't like this arrangement separate out Your cattle from ours and steer Your cattle all day long. All this time, You have been having your way. Now we refuse to be manipulated by you. Why are you acting so smart?

So far, we protected you, thinking you to be the little brother of our friend Balram. But now you are crossing all limits. Sometimes you go and take a nap, at other times you escape to play the flute. We are not your servants employed by your Dad to keep serving you all day long. Also, we are not scared of you complaining to your father. What if Your father has a few extra cows than my father? We do not rely on your father to feed us, nor does he provide us shelter!!"

Shri Krishna wanted to have a little fun but this little prank turned ugly very quickly. With such accusations from His friends, Krishna realized that His friends were really upset with Him, and that made Him very nervous. Out of fear and nervousness, His throat was choked and tears started rolling down his eyes.

The poet, Shri Kripalu Ji Maharaj says that it is generally seen in the world that adopted children are over pampered and spoilt by their parents.

Rapture: Love knows no dignity. His friends love Shri Krishna so much that Shri Krishna is always desperate to hear their love sopped scolding.

​This beautiful story is written in a poetic style in a book “Prem Ras Madira”. This book is divided into several sections. This particular one is from Bal Leela Madhuri i.e. Shri Krishna’s childhood pastimes.
<- Religious Festivals (When, What, Why)