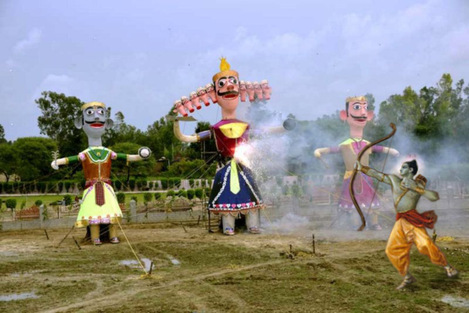 Triumph Of Lord Rama Over Ravana

One of the popular Hindu festivals, Dussehra is celebrated with pomp and gaiety.The celebration of Dussehra is rooted in the Hindu epic of Ramayana, according to which, Lord Rama, the eight incarnation of Lord Vishnu, killed the ten-headed demon Ravana, in Treta. Ravan had abducted Lord Rama's wife Mother Sita. Rama, along with his brother Lakshmana, follower Hanuman and an army of monkeys, headed towards Lanka (Ravana's Kingdom) in order to defeat Ravana and rescue Mother Sita. Lord Rama defeated and killed Ravana, with the help of his fellow beings. Therefore, the day was celebrated to commemorate the victory of Rama over ten headed Ravana. That’s why it is called Vijaydashami (victory on the 10th day) or Dasha-hara (end of ten(dash) headed Ravana). Now, somehow it has become famous with a wrong name of Dusshera.  It is celebrated on the tenth day of bright half of the Hindu month Aswayuja.
People worship Ram, distribute lots of Prasad. Besides that the main attraction of the day is burning of effigy of Ravan. A massive fete is arranged where lots of people get together to enjoy variety of food, clothes, toys and cultural programs.

The second attraction is Ramlila. Mostly the most prominent being Delhi, Himachal Pradesh, Uttar Pradesh, Mysore and Orissa. play pastimes of Shri Ram from beginning to end of Shri Ram’s life on a big stage in a very profound way, which gives knowledge to the children about Shri Ram and festival of Dashara. It goes on for ten days. The last episode is burning of effigy. Which takes place on the main day of Dashahara.

Many people read Ramayan every day for ten days finishing on Dashahara.

The best way to enjoy this festival is to chant the name of Shri Ram or read Ramayan to remember Him, decorate home with glimpses of pastimes of Shri Ram. In other words, do anything, which may increase your devotion. This is the only purpose of celebrating any religious festival.