One day, Guru Dronacharya, the teacher of Kauravas and Pandavas, set up a target in the shape of a bird on a tree and invited his students to shoot at it. When they took aim, he asked each of them a question. ​

First, Duryodhana took up his stance. “What can you see?” asked Dronacharya.

​Dronacharya ordered him to put the bow down and go back to his place. Next was Yudhishtra, but the answers were the same. Some others added that they could see the teacher, their cousins and people standing around. The princes began muttering among themselves as one by one, they were all sent back to their place without being allowed to shoot. Even Ashwatthama, Dronacharya’s son, could not understand what his father wanted. Finally, Arjuna was the only one left. 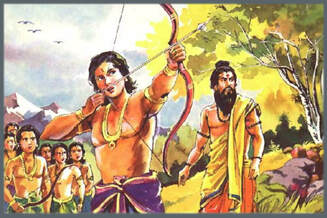 ​When Dronacharya gave him the order to shoot, Arjuna released the arrow. It sped straight to the target and pierced the bird's eye. Dronacharya embraced the boy and then told the others, “When you want to achieve something, you must focus on it. Close out all other distractions and concentrate only on your target.”
Moral:
This is Kaliyuga. There are a lot of philosophies and ideologies floating around and new ones are constantly forming. This is very confusing for ordinary human beings. But if you really want to attain God AND you have already met a genuine saint then shut out all that noise and follow the precepts of the Guru. Only then can you achieve your objective of attaining God.
<< Kripalu Leelamritam - He honors His devotees' wishes above all
If you enjoyed this one, you might also like