​Shri Krishna - Our only Eternal Relative Shri Maharajji drawing the Chakravyuh
During the Mahabharata war on the 13th day, Arjun had to leave town to squash an uprising. On the same day the Kauravas general Guru Dronacharya organized the Kaurava army in the form of a complicated maze called Chakra-vyuh. That formation has 7 gates. 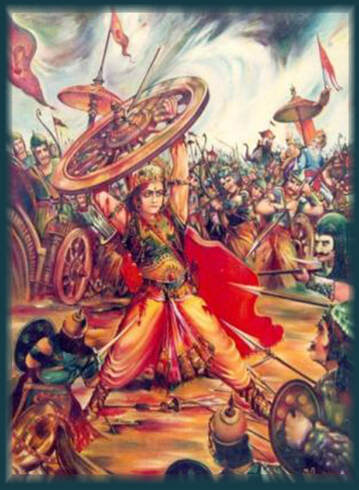 Abhimanyu fighting bravely in the Chakravyuh
On Pandavas' side only Arjuna knew how to penetrate that formation. By the time the Mahabharata war started, Abhimanyu was 16 years old. He knew how to penetrate six gates. Still, Pandavas were in a pickle because Arjun was away, Abhimanyu was not old enough to fight a war alone and not sending any warrior to the battlefield would mean automatic defeat of Pandavas. So the generals of the Pandava army came up with a plan. That being Abhimanyu would lead the way into the 1st 6 gates and other warriors will follow behind him. The valiant Pandava warriors would support him in penetrating the 7th gate and also keep the path open for Abhimanyu to return after defeating Kaurava King Duryodhana inside the 7th gate.

However the plan didn't go as planned. Since only Abhimanyu knew how to enter, only he could enter and all others were left outside.

​He fought alone yet valiantly and managed to successfully penetrate through the six gates causing massive damage to the Kaurava army. While fighting to penetrate the seventh gate Kauravas violated all the war rules e.g. as fighting one on one, no one attacks unarmed persons, attacking only from the front. Together they killed Abhimanyu. At that time his wife Uttara was pregnant.

When Arjun returned he heard of the tragic death of his young son, he was remorseful. He requested Shri Krishna to bring back Abhimanyu just once. Shri Krishna laughed and said, "you have seen him for 16 years. If your thirst to see him is still not quenched, then how will seeing him one more time quench your thirst". Arjun was a friend, so he dismissed all the logic and insisted, "Yes, I know all that. Still show me my son. I know You can do it".
With His Yogmaya power Shri Krishna called the soul , gave him a body just like that of Abhimanyu and situated Abhimanyu in the sky in front of Arjun. Seeing his son's form, Arjun extended his arms and said, "My son!". At that, Abhimanyu chided him and said,"Who are you calling your son? I left your son's body with you. I have been born several times as your son and you have been born several times as my son. I am a soul and I am the son of the one who's standing next to you (Shri Krishna)".

Arjun was taken aback. He realized the truth of Abhimanyu’s statements.
Moral
Our parents are the mother and father of the physical body only. A material being cannot give birth to the soul. In fact, the parents are completely unaware of the gender, complexion, form and nature of the child before his birth. Neither they know his past nor future. God is the eternal father of every soul. The truth is that each and every relationship of every soul is with God and God alone.
No souls are created anew. Based on the past Karmas of the soul, God chooses the life-form of the mother and sends the soul in that mother’s womb. The Vedas say -
यतो वा इमानि भूतानि जायन्ते, येन जातानि जीवन्ति, यत्प्रयन्त्यभिसंविशंति, तद् विजिज्ञासस्व । तद्व्रह्मेति ।
yato vā imāni bhūtāni jāyante, yena jātāni jīvanti, yatprayantyabhisaṃviśaṃti, tad vijijñāsasva । tadvrahmeti ।
“The one, who is the origin of all the living beings, sustainer of all the beings and the ultimate place to merge at the time of total annihilation, is God.”

Multiple waves surge from the ocean. They might develop camaraderie but the very next moment they might annihilate or separate. Only the ocean knows from where they emanated from and wherein they merged.

Hence instead of getting attached to the temporary ones, a wise man ought to recognize the eternal relative and increase love for Him. Also, He is the ocean of bliss, so, as you approach Him, your heart will keep getting filled with more and more bliss.
<< Kripalu Leelamritam - “Laddoo chor”
If you enjoyed this one, you might also like