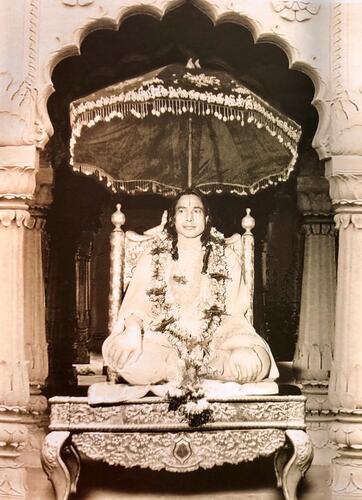 Jagadguru Kripaluji Maharaj
After Shri Maharaj Ji became Jagadguru, He was given a long list of rules to abide by. Some of those were: ​
Before becoming Jagadguru, Shri Maharaj Ji sent a telegram to devotees in Pratapgarh saying “I have become a Jagadguru and will reach Pratapgarh on Jan 15th at 4:00 pm. As decided earlier, prepare for celebrations of victory”.

Devotees started preparing for the procession. They planned the start of the procession from the railway station through the city to end at a Government school. There a 8-feet stage was erected so Shri Maharaj Ji and a few other scholars could do a lecture-series for over a period of 15 days.

Later another devotee, Priyadarshi Ji asked Shri Maharaj Ji about abiding by the rules that come with the title of Jagadguru. Shri Maharaj Ji said “Rules are made for (attaining) me. I am not made for (obeying those) rules”.
​
That day Shri Maharaj Ji broke the rules to uphold the love of an Ananya Bhakt (exclusive devotee).
Moral:
​God is so gracious that He always upholds the wishes of His fully surrendered devotees. If the rules of the society go against His devotee’s wishes, He breaks all those rules including His own vows/rules. Also, God is beyond caste and creed. He looks at the soul, not the body.