Located in Uttar Pradesh, India, JKP Education provides 100% free education from kindergarten to postgraduate studies to more than 5,000 girls living in impoverished rural areas near the small town of Kunda in Pratapgarh District.

With 430 million children in India, every sixth child in the world originates from India. Unfortunately, even today girls in India are robbed of an education due to poverty. School dropout rate in India among adolescent girls is as high as 63.5%.  Educating girls is not a priority for most families who are already struggling to meet the basic daily needs of food, roof and clothing for their family members.

Recognising this need, Jagadguru Kripalu Parishat established three educational institutions in this rural town of Uttar Pradesh that span from pre-school to post-graduate studies. All three institutions not only provide free education, but also provide free summer and winter uniforms, books, bicycles, umbrellas, etc., to ensure that any obstacle to a student's education induced by poverty is removed. For more information visit: www.jkpeducation.org 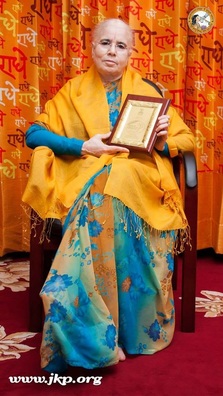 JKP President Dr. Vishakha Tripathi (Badi Didi) was honored for her constant efforts in empowering women through free, charitable schools and college. Zee Sangam recognized her hard work and dedication, and presented her with the Zee Sangam Award.

Congratulations to our Badi Didi!

Join Others and Sponsor a Girl's Education

Shri Kripalu Kunj Ashram is proud to support the work of JKP Education. Please contact us for more information or make a tax-exempt donation below. 100% of your donation, less service charges, will be directed to JKP Education:

JKP Education Recognized For Its Contributions to Society 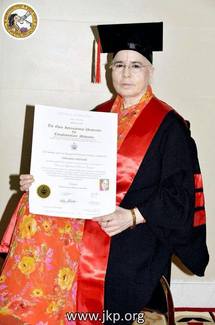 Vishakha Tripathi, president of Jagadguru Kripalu Parishat, has been conferred an honorary D.Litt by The Open International University for Complementary Medicines of Colombo at its 52nd International Congress here Saturday.

Vishakha Tripathi was felicitated for her work in social development in the auspices of Jagadguru Kripalu Parishat where she cares for complete rehabilitation and education of some 4,500 girls from primary to post-graduate levels at educational institutions managed by JKP.

Scroll down to see other awards received by JKP Education for it's world class programs. 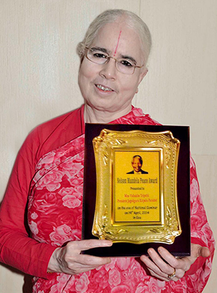 JKP Education's President, Vishaka Tripathi, accepted the prestigious award in Delhi on April 19, 2014, from a member of Indian Parliament and former Minister of State of Home Affairs, Shripad Yesso Naik.

"Our aim is to remove any obstacle to a girl's education that is likely to be induced by poverty," said Vishaka Tripathi.  G.S. Sachdeva, General Secretary of the Economic Growth Society of India commented, "These awards have been instituted with the goal of honoring individuals and organizations that have made selfless contribution towards the growth of India". 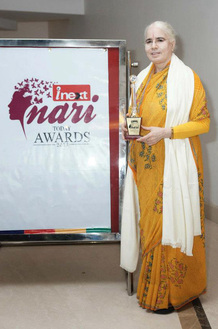 Nari Award for Outstanding Achievement, 2013
Sushree Vishakha Tripathi Ji, President of Jagadguru Kripalu Parishat (JKP), received the “Nari Today” Award from iNext on May 7, 2013, in Lucknow, India - NARI Achievement Awards annually salute the Rise of Today's Women by recognizing the outstanding achievements of an individual, a company, or organization.

JKP India, under the leadership of its President Vishakha Tripathi, has been operating two charitable hospitals and three educational institutions for women in impoverished rural areas of Uttar Pradesh, India.  The two state-of-the-art hospitals, which offer free medical care, serve millions of underpriveleged who live in these remote rural areas, and who have either no other means or access to modern health care.  A third hospital is now under construction in Vrindaban, U.P., India.  The three girl’s educational institutions provide free education from kindergarten through master’s degree programs, thus broadening the horizons and offering hope to thousands of underprivileged girls and young women in rural India. 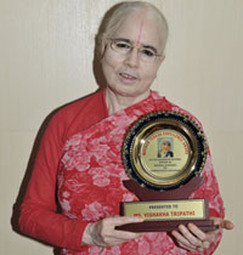 Mother Teresa Excellence Award, 2013
Instituted by the non-profit Economic Growth Society of India, this award honors both individuals and organizations for their contributions to India's economic and social growth. An award and citation of excellence were presented to Vishakha Tripathi, president of  Jagadguru Kripalu Parishat Education. JKP Education offers free education to over 5,000 girls from  pre-primary to post-graduation level through its institutions at Pratapgarh in Uttar Pradesh.

Among the services offered at no charge to students are transportation, bicycles for  those who travel longer distances, uniforms, school bags, and other school-related requirements.

Join us in creating a bright future for thousands of young women... donate now!

...or donate the amount of your choice by clicking on any of the links above. 100% of your donation, less service charges will be directed to JKP Education.