Due to Faith God Shows His Divine Form 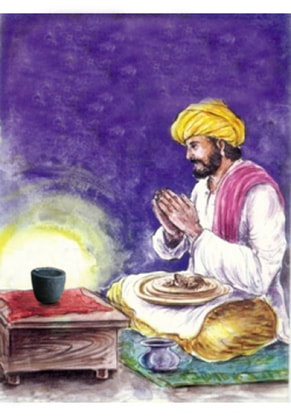 We all strive to attain pure, ever lasting, ever new, ever increasing bliss. The bliss can only be attained by having complete, unwavering faith in God. Our scriptures tell a beautiful story about Dhanna Jat to elaborate this point:

Dhanna Jat was a poor uneducated man who lived in a small village in the state of Rajasthan.  He was a regular at the local village temple and used to notice the priest spending a lot of time inside the temple. Out of curiosity, he once asked the priest, as to what does he do at the temple. The priest told him that he performs puja and worship to Lord Shri Krishna. Dhanna Jat further asked, why does he perform worship to the Lord to which the priest replied, so that the Lord will make me prosperous and happy.

The innocent Dhanna took this statement seriously and thought I am also fed-up of my miserable condition and poverty. I will also perform worship to the Lord, so I too can be blessed with happiness and prosperity. He asked the temple priest for an idol of Shri Krishna and asked the priest to teach him the method of performing worship. The priest did not have a spare idol of the Lord, and further he did not take Dhanna’s request seriously. But Dhanna was insistent. He had set his mind on worshiping the Lord and gaining benefits from that, as explained by the priest 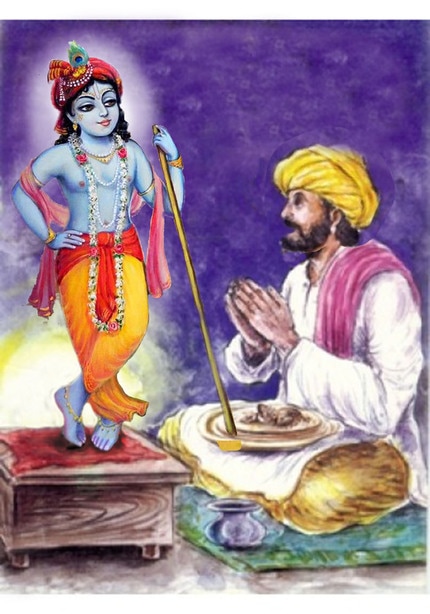 Fed up by his persistence and knowing Dhanna to be naïve and innocent, Pandit Ji gave Dhanna a black mortar that he used to use to grind opium with and said,"This is Shri Krishna. Worship Him by offering food to Him every morning and evening and then eat the leftovers". Dhanna was really excited. He took the black mortar home, cooked food and offered it to the deity. Dhanna waited till the evening, but Shri Krishna did not eat. Disappointed that the food may not have been to His liking, Dhanna decided to throw away the food and cook a fresh meal for Him for dinner. Shri Krishna did not come and eat the food in the evening as well. Dhanna figured that Krishna may be full with all the yogurt and butter offered by the Gopis and so He did not come to eat. He threw away the food in the evening and since the priest had instructed him to eat only the leftovers from Krishna’s food, Dhanna had to go hungry that day.

This continued on for 6 days. Dhanna would prepare the food, offer it to the deity of Lord Krishna, Lord Krishna would not eat and Dhanna would have to throw away the food and remain hungry. At the end of the 6th day, Dhanna got really upset. He thought, here he was working hard to provide food for Lord Krishna and cooking Him a fresh meal morning and evening and Krishna was so busy enjoying the butter milk offered by the Gopis that He did not even bother to come and pay him a visit and at least taste the food, so Dhanna could get some leftovers to eat.

Hungry and hurt by Shri Krishna’s indifference towards him, he decided to teach Krishna a lesson. Dhanna  picked up a cane and threatened to beat Him up if He did not show up right a way to eat the food. He stood with the cane in front of the deity and told Him that he will serve a strong blow to His head, if there was even a fraction of a moment worth of delay in appearing in front of him. Overcome by innocent Love and purity of Dhanna’s heart, Shri Krishna appeared in front of Dhanna and started eating the food that he offered. From that day on, Dhanna always fed the Lord and only ate the leftovers from His plate.

Any tactics, pressure or means in the form of austerities, performance of Vedic rituals, the practice of yoga, following the path of knowledge, renunciation or worship cannot force God to appear in His Divine form. All these activities are performed with material mind and senses only. But when a devotee yearns for Him and calls out for Him from the bottom of his heart, the divine Lord is overcome by the same sense of yearning for the devotee and comes running towards him with His arms stretched out to embrace Him. God is omniscient and omnipresent. He dwells in each and every particle of this universe. He resides within everyone’s heart and notes down every single thought that goes through our minds. Shri Krishna knows, whether the devotee is fully surrendered to Him or not. Before God-realization, our mind is material, yet when a devotee calls out for Him in true earnest, God being all knowing and most kind and gracious, does not waste anytime in appearing in front of the devotee to grace them with His darshan.

This is the reason why God listened to Dhanna’s call out. Dhanna called out for God innocently, with a firm faith that God lives  in the mortar and would definitely come out to eat His food. This sincere, unflinching faith is the only way to realize God.
भगवान किसी साधना के चाबुक से नहीं आते, वे अपनी इच्छा से आते हैं ॥
No amount of austerities can force God into showing His Divine Form to a devotee. God appears purely by His own wish.
- Jagadguru Shri Kripalu Maharaj
<-- View Previous Posts of Divya Ras Bindu