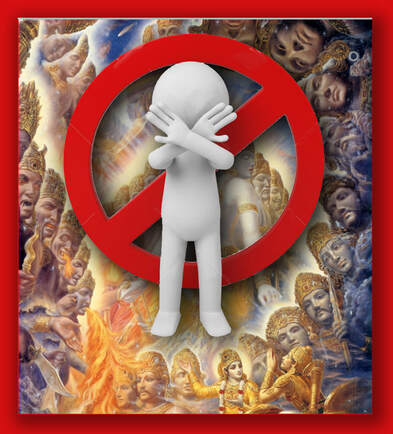 This is a contentious question. So, let us answer this question based on the philosophy explained by the fifth original Jagadguru Shri Kripalu Ji Maharaj, who was honored with the title of Jagadguruttam (greatest of all Jagadgurus) by the prestigious assembly of 500 most learned scholars of “Kashi Vidwat Parishat”. Shri Kripalu Ji Maharaj, lovingly known as Shri Maharaj Ji by his devotees, proclaims, “If you are serious about performing true devotion to the lotus feet of the Lord, stop worshiping God”.

That raises a big question - if we do not worship God,  who should we worship? The demi-Gods or celestial-beings (devi-devatas)? No, never! They are material beings just like us, different only in the fact that they are endowed with superior knowledge and special powers, but they suffer from the same mental afflictions including anger, passion, greed, jealousy, hatred etc., as we human beings do.

This raises an even bigger question - if we are not expected to worship either God or the demi-Gods, that leaves only two other entities - humans or demons. Should we worship humans or demons? No, Absolutely not! 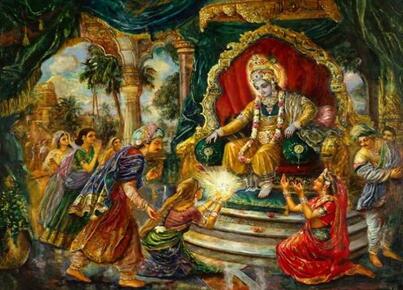 The subjects in Dwarka knew their ruler was God Shri Krishna and they behaved accordingly.
Shri Maharaj Ji says, offer your devotion to the lotus feet of Shri Krishna.

God is called Bhagavan in Sanskrit. The Sanskrit word Bhagavan is made up of 2 words
And Shri Krishna possesses all of these 6 bhag. So there is no doubt that He is Bhagavan, the supreme divine personality.
Shri Maharaj Ji explains in detail about these six bhag (majesties) of Shri Krishna, yet he warns us against worshiping “Bhagavan” Shri Krishna. Instead He says, a devotee must establish a loving relationship with Shri Krishna. It is to be noted that Shri Maharaj Ji is not recommending to abandon God, rather he is saying, worship Shri Kirishna with loving sentiments i.e. love Shri Krishna.

In the same way, many devotees worship the majestic form of Shri Krishna, also known as MahaVishnu or Paramātmā.  MahaVishnu is the epitome of glory and commands reverence and worship in the hearts of the devotees, but the devotees cannot associate with Him in a loving and intimate manner. This mode of worship is called Shant Bhav (distant relationship); so distant that rasik saints do not even consider it to be a ras (रस​) or nectar of devotion. His divine majesty creates a sense of formality and induces fear in the hearts of the devotees. According to rasik saints ras starts at dasya bhav (servitude) where the divinity of God is forgotten. 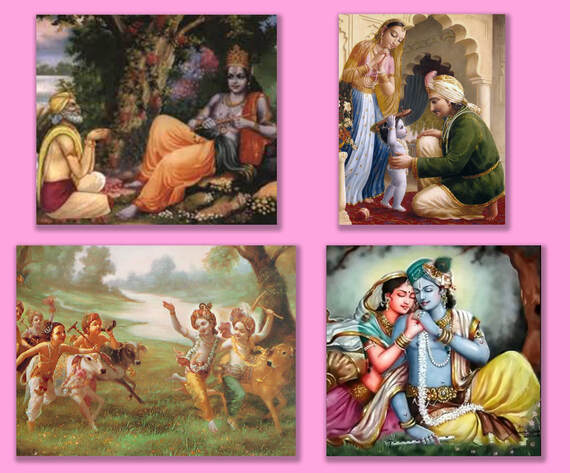 Worshiping Shri Krishna with these four bhavs
That is why Shri Maharaj Ji advises us to simply forget that Shri Krishna is Bhagavan and love Him with any of the four devotional sentiments of love called bhav. These relationships provide an increasing level of proximity and intimacy with Shri Krishna than the previous one:
Our Vedas say that Shri Krishna is both the honey and the honey bee. He is as sweet as Honey, and He distributes that love and sweetness amongst His devotees and in turn enjoys His own nectar through His devotees, who are drenched in the nectar of His divine association.

So, in a nutshell
हरि ते ना कभु डरना, उन्हें अपना ही मानना ॥
hari te nā kabhu ḍaranā, unheṃ apanā hī mānanā ॥
So, we must put aside His glory, magnificence and divinity along with all the formality, fear and decorum associated with his divinity and remain absorbed in the sweet sentiments of love for Him, just like the Gopis of Braj.
Love our Publications!!